Hamas and the Islamic Jihad’s military wing have claimed responsibility for the recent rockets fired into Israel, raising talk about the potential that factions may form a joint armed operations room. 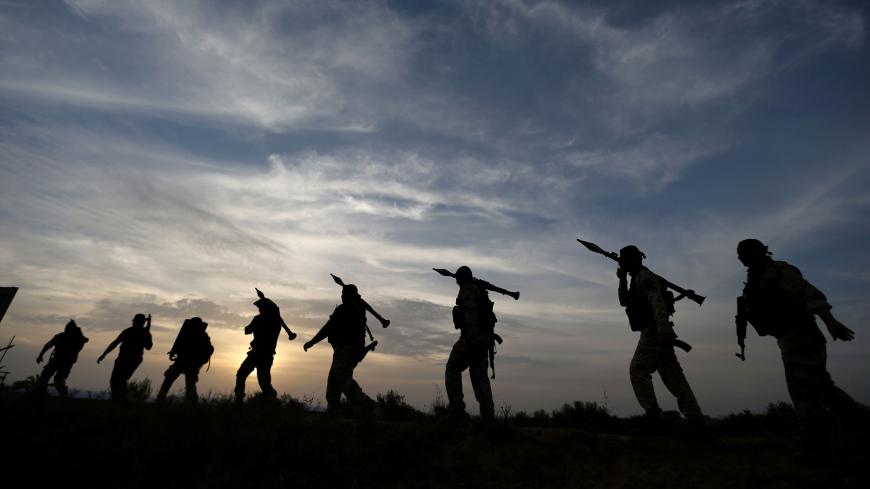 The Israeli towns adjacent to the border fence with the Gaza Strip witnessed May 29 intensive bombing of 80 mortars by Palestinian armed factions. The Israeli army responded by shelling 56 Palestinian targets in Gaza in what is considered the most dangerous escalation since the end of the 2014 Gaza war. No deaths on either side were reported.

The escalation came in the wake of the killing of two Palestinian Islamic Jihad members and one Hamas member with Israeli artillery shelling May 27-28. Israel was responding to the planting of an explosive device at the border fence. Islamic Jihad and Hamas had promised to strike back.

The missiles were launched by both Izz ad-Din al-Qassam Brigades, Hamas’ military wing, and Al-Quds Brigades, the military wing of Islamic Jihad. The two groups issued a joint statement May 29 underlining the eye-for-an-eye approach that they would hold on to no matter what. The statement said, “We will not allow the enemy to impose new approaches.”

The joint work between al-Qassam Brigades and Al-Quds Brigades poses several questions about the reasons behind this field coordination. Why have Hamas and Islamic Jihad agreed to work together now? Is this a prelude to opening a new chapter of joint armed attacks against Israel?

Hamas and Islamic Jihad are on the same page ideologically, and they have the same political stance toward Israel and armed resistance against it. They held joint meetings that culminated in the Great Return March in the Gaza Strip on March 30. The Palestinian Authority and Israel are pursuing the two groups in the West Bank.

While Islamic Jihad does not take part in legislative elections, Hamas won control of Gaza in 2006 and recently called for holding elections. But the two groups boycotted the meetings of the PLO’s Central Council in January in Ramallah and refused to attend the Palestinian National Council session at the end of April there. Islamic Jihad has strong relations with Iran, Syria, Lebanon and Egypt. Hamas has relationships with other Arab countries such as Qatar and Turkey in addition to its relations with Iran, Lebanon and Egypt.

Perhaps the two groups believe they can rely on each other. They share some goals, and they do not have tense relations. They also executed joint armed operations against Israel.

Mahmoud Maradawi, a Hamas leader in Gaza and a former al-Qassam Brigades military commander, told Al-Monitor, “This joint militancy heralds the formation of a national army to confront Israel. Neither faction will take over the other. Field and operational coordination will be in place, and there is an inclination to include all armed factions to implement the joint operations. Since Hamas and Islamic Jihad have similar political programs, our approach is strategic rather than tactical.”

On May 30, several Palestinian military wings issued a joint statement asserting their readiness to fight any Israeli aggression. The statement said, “Our calculations are based on pure Palestinian decisions.” In addition to al-Qassam Brigades and Al-Quds Brigades, Salah al-Din Brigade, the Mujahedeen Brigades, Abu Ali Mustafa Brigades, the National Resistance Brigades and other armed groups signed the statement.

Palestinian talk about a purely Palestinian decision to fight Israel might have been in response to Israeli Prime Minister Benjamin Netanyahu’s accusation May 30 that Palestinian organizations are under Iranian influence. Spokesman for the Israeli army Ronen Manelis also claimed May 29 that Iran is responsible for the escalation in Gaza.

Spokesman for Islamic Jihad Daoud Shehab told Al-Monitor, “This is not the first time al-Qassam Brigades and Al-Quds Brigades implemented joint operations. They have done it before. But in the past few years, their coordination has developed, and they have established a joint bilateral operations room in July 2017 to reflect the improving Hamas-Islamic Jihad relations. This room proved to be a need due to the challenges facing the Palestinian cause, and we hope the coordination will develop with all armed wings to reach a unified front.”

Al-Qassam Brigades and Al-Quds Brigades have implemented several joint operations in the past. On July 24, 2014, they attacked an Israeli military unit in Khuza’a in the southern Gaza Strip. During the Gaza war in 2014, the factions distributed roles among each other: While they targeted Israel with medium-range missiles, other groups targeted areas near Gaza with short-range missiles.

In December 2007, al-Qassam Brigades and Al-Quds Brigades carried out the Beit Kahel attack in the west of Hebron, killing two Israeli soldiers. In October 2003, they killed three Israeli soldiers when they attacked a military location in the former Netzarim settlement in the center of Gaza before the Israeli retreat in 2005. In June 2003, they raided an Israeli location in the Erez area in the northern Gaza Strip. The Al-Majd security website mentioned that the militants of the two factions participated in joint training in Gaza in March 2015.

Kayed al-Ghoul, a member of the political bureau of the Popular Front for the Liberation of Palestine, told Al-Monitor, “We need a unified resistance front — including the joint operations room — that has a single political decision and that aims at consolidating the capabilities of the resistance forces with one vision. The aim is to protect our people from Israel, reduce Palestinian losses and, most importantly, steer clear of instantaneous tactics and stick to strategy, including the agreement on any truce or appeasement with Israel.”

Joint military operations may be the top tactic for the Palestinian factions. Their importance lies in achieving the broadest grassroots base in support of the armed resistance and integrating all the forces in it. The majority of the masses would be espousing this option as a joint project.

Perhaps Hamas is paying the price for monopolizing the resistance for political purposes, as it has been accused by some Palestinians. Therefore, Hamas wants to open the door to working with other groups, hoping this will give a boost to "resistance culture" and be a success for its ideological line. Operationally, implementing joint attacks burdens Israel and disperses its security achievements.

Wassef Erekat, a Palestinian military expert in the West Bank and former PLO artillery unit commander, told Al-Monitor, “Hamas wants to involve factions to strengthen its stance so that it does not seem alone in facing Israel. But a united Palestinian army is still a long way ahead because its existence goes beyond the military dimension and touches on political authority that this army would refer to. Palestinians are experiencing division and a united army will not succeed at this stage. Even though Hamas and Islamic Jihad are fighting under the same political umbrella and their main funder is Iran — which encouraged them to establish a joint operations room — Fatah is different from both and will not join them.”