The recent escalation between Israel and Islamic Jihad in the Gaza Strip has raised questions as Hamas refrained from partaking in the fighting. 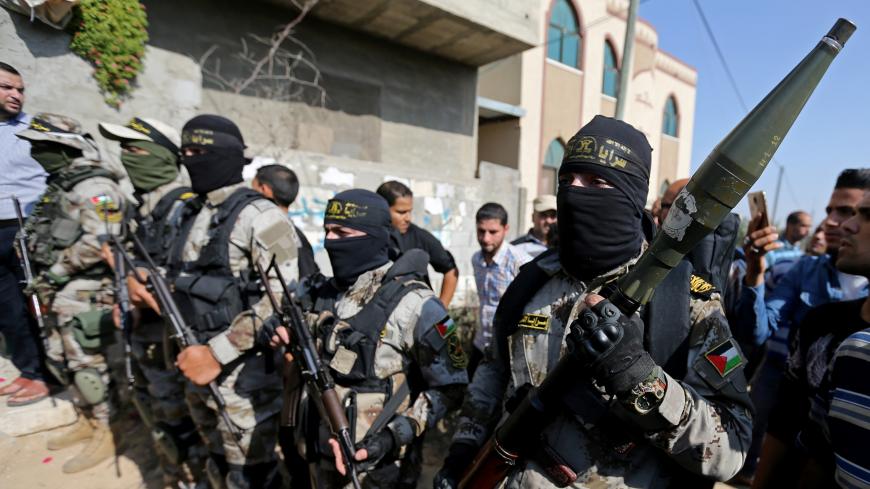 RAMALLAH, West Bank — The Gaza Strip witnessed a two-day confrontation that kicked off at dawn on Nov. 12, as Israel targeted Islamic Jihad leaders.

Throughout the hours of confrontation, Al-Quds Brigades, the military wing of Islamic Jihad, spearheaded the bombing of Israeli cities and settlements adjacent to the Gaza Strip with dozens of rockets in an operation coded "Roar of the Dawn.”

Other Palestinian military wings joined the battle, including Abu Ali Mustafa Brigades affiliated with the Popular Front for the Liberation of Palestine, Mujahedeen Brigades, Al-Aqsa Martyrs Brigades and Nidal al-Amoudi Battalion of Fatah's military wing. Izz ad-Din al-Qassam Brigades, the military wing of Hamas, decided not to get involved.

This decision by Hamas stirred resentment within the Islamic Jihad movement. Speaking from Beirut on Lebanon's Al-Mayadeen channel Nov. 14, Islamic Jihad Secretary-General Ziad al-Nakhala affirmed that the battle is that of the Palestinian people and not of Al-Quds Brigades only.

He noted that when Israel agrees to allow the entry of financial aid, it does so to tame the resistance. Israel has been allowing Hamas to bring in the Qatari monthly financial aid.

Qatari Ambassador Mohammed al-Emadi had distributed the first tranche of $15 million in November 2018 to pay Hamas employees. Qatar seems adamant about keeping its financial support to the Gaza Strip.

Several reasons may be behind Hamas’ decision not to partake in the fighting alongside Islamic Jihad, most notably its desire to steer clear from an open confrontation with Israel. Hamas leader Atef Adwan told Al-Monitor, “Al-Qassam Brigades’ decision not to intervene in the confrontation is the result of some form of consensus within the resistance joint operations room. One faction — Islamic Jihad — was able to respond to the assassination, without turning this incident into a full-fledged confrontation with Israel.”

He added, “When Islamic Jihad took the initiative to retaliate it was able to achieve the political, military and security objectives. Had it needed support, it would not have hesitated to resort to Hamas, given the strong level of coordination between the two movements.”

Adwan noted that the relationship between Hamas and Islamic Jihad after the confrontation grew stronger. “Both believe that the next confrontation with Israel should be supported by a unified position by resistance factions, should be in line with the Palestinian popular position and foil Israeli efforts to create a division between them.”

During a Nov. 17 visit to pay condolences to the al-Sawarka family for the loss of eight of its members who were killed by the recent Israeli shelling, Haniyeh said that Hamas did not give up on the resistance and vowed to retaliate. “This round of escalation may have ended, but the battle is far from over. It will only end when we expel the occupation from our land and our Aqsa [Jerusalem].”

“Al-Quds Brigades responded to the assassination of its leader Bahaa Abu el-Atta and accomplished the mission,” said Mohammad al-Hunaidi, a member of Islamic Jihad's political bureau, in an interview with Hamas-affiliated Al-Aqsa TV on Nov. 18. “Not everyone is required to retaliate for the assassination of Abu el-Atta. It would not have been wise for al-Qassam Brigades to enter this battle. This kept the confrontation from spiraling into a full-blown war.”

Mustafa al-Sawaf, a political analyst and former editor-in-chief of the local Felesteen newspaper, told Al-Monitor that the resistance’s response to Israel was based on an understanding among all Palestinian factions. “Israel targeted a leader in Islamic Jihad, and the latter had the chance to respond in a way that can deter Israel.”

Sawaf described the understandings as “profound” between al-Qassam Brigades and Al-Quds Brigades. He said, “Al-Quds Brigades was able to respond unilaterally to Israel, which was seeking to drag Hamas into the battle. This would have given Israel the chance to launch broad-scale aggression on Gaza.”

Hamas is not distancing itself from the fighting because it only wants to dodge a large-scale war with Israel. There are several other reasons according to political analyst Talal Okal. “Most notably, Hamas wants to maintain the Egyptian-brokered truce understandings it signed with Israel,” he told Al-Monitor. “Islamic Jihad took the decision to retaliate for the assassination of Abu el-Atta unilaterally and immediately after the assassination without consulting anyone, or referring to the joint operations room or Hamas. It broke the rules of engagement in the Gaza Strip where Hamas is the ruling authority. This could have stirred some sensitivity by Hamas, and this is why it probably left Islamic Jihad to handle this matter alone.”

Okal believes that had Hamas intervened, the escalation would have climaxed, especially because this is exactly what Israel is after. “Hamas does not want escalation. It is comfortable with the rules of the game as of now, in light of understandings with Israel and as long as Qatari funds enter Gaza with Israel’s approval,” he said.

He pointed to other factors behind Hamas’ decision, such as the Egyptian intervention to reach a cease-fire from the first hours. “Hamas is well aware of Egypt’s capability to achieve this, and cannot reject the Egyptian request because of the good relationship they have.”

Hamas’ abstention from taking part in the latest round of fighting, despite the questions it triggered, has not affected its relationship with Islamic Jihad, which remains deep-rooted. This abstention, however, has failed to dispel the hunch that the upcoming confrontation between Hamas and Israel is imminent. On Nov. 16, after the cease-fire with Islamic Jihad, Israel accused Hamas of bombing Beersheba with two rockets.