Israel is reportedly considering offering Hamas incentives in the Gaza Strip, following the movement not getting involved in the latest confrontation between Israel and Islamic Jihad. 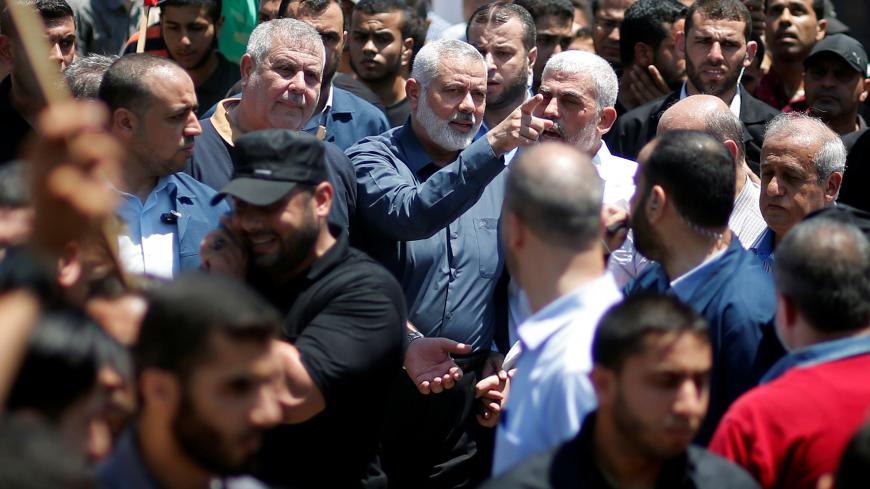 The latest round of military escalation between Israel and the Palestinians in the Gaza Strip on Nov. 12-14 has killed 34 Palestinians and injured 111 others, in addition to 65 Israeli wounded. The exchange of fire erupted after Israel assassinated Islamic Jihad military commander Bahaa Abu el-Atta in a targeted strike on his house in Gaza on Nov. 12.

The escalation this time was limited to confrontation between Israel and Islamic Jihad only, without clear participation from Hamas.

Hamas deputy leader Saleh al-Arouri told Al-Aqsa satellite channel Nov. 19 that the disrupted coordination between the two movements led to lack of organization in responding to the assassination. Yet Hamas offers direct military aid to all armed factions, he added.

Shortly after Hamas announced its disengagement from the recent confrontation, Haaretz reported Nov. 14 that the Israeli army and the Israel Security Agency (Shin Bet) advised the government to provide Gaza with economic incentives. The newspaper reported that Israeli Defense Minister Naftali Bennett supports this step, without showing that Hamas is coordinating with Israel to avoid embarrassing it before the Palestinian public.

On Nov. 16, Israel allowed the entry of dozens of oil trucks into the Gaza Strip, expanded the fishing zone from 6 to 12 nautical miles and reopened its border crossings, after it had closed them Nov. 12 following the unrest in Gaza.

Hamas spokesman Hazem Qassem told Al-Monitor, “Israel began its escalation by assassinating Abu el-Atta. Hamas blamed Israel and the factions exercised their right to defend their people. Hamas is at the heart of the conflict against Israel. It is a key component of the Palestinian national movement and cannot be excluded. Lifting the Gaza blockade is a Palestinian demand and Israel is responsible for its perpetuation. The blockade deepens the humanitarian crisis in the Gaza Strip and constitutes fertile ground for ongoing tensions.”

A Hamas official told Al-Monitor on condition of anonymity, “The incentives for Gaza mentioned in Haaretz were agreed upon as part of humanitarian understandings between the resistance and Israel, with Egyptian, Qatari and UN brokerage that started in October 2018. They are not related to the recent Israeli aggression on Gaza or Hamas’ stance. We are [still] waiting for the Israeli promises to alleviate Gaza’s suffering to materialize.”

Former Gen. Udi Dekel, director of the Institute for National Security Studies at Tel Aviv University, wrote in a research paper Nov. 18 that Hamas is sensitive to the mood of the Palestinian people. It mainly refrained from engaging in the recent confrontation out of belief that its participation would jeopardize economic projects in the fields of water and power, halt the trade movement through the crossings and push businessmen and workers from the Gaza Strip to Israel.

Said Basharat, editor-in-chief of Al-Hodhud network for Israeli affairs based in Gaza, told Al-Monitor that Israel might be taking a carrot-and-stick approach with Hamas in the Gaza Strip, "giving it a carrot [now], and waiting until the conditions are suitable to use the stick. Hamas’ increasing military power would reduce chances of Israel offering incentives to Gaza. Meanwhile, Hamas might not accept relying on Israeli promises that are not serious, out of fear of being gradually led into settling for the status quo in Gaza. Israel is aware that Hamas might take a firm decision to end the blockade on Gaza and that excluding it from the recent confrontation was the exception rather than the rule.”

Looser Israeli measures toward Gaza might be an attempt to push Hamas into holding on to its self-restraint policy and not to engage in any future military escalation. But this might not happen for two reasons: First, the ongoing exchange of threats between the two sides and Hamas’ conviction that Israel is getting ready to attack; second, the rampant political crisis in Israel and new elections being scheduled for February 2020, for the third time in less than a year. As a result, the current Israeli government would be unable to implement looser policies in the Gaza Strip.

Mohammad Abu Jiab, editor-in-chief of Al-Eqtesadia newspaper in the Gaza Strip, told Al-Monitor, “Israeli incentives do not [lead to] lifting the siege completely or achieve a real breakthrough in the tough situation in Gaza. The expected incentives include increasing the number of Palestinian workers from Gaza in Israel from the 5,000 currently allowed in, developing the US-funded hospital in the north of the Gaza Strip to improve health services and supporting Qatar’s efforts to resolve the electricity crisis and build a water desalination station in the south of the Gaza Strip, among other projects.”

On Nov. 19, a batch of equipment from the US-funded field hospital — which Israel allowed to be set up in May with Egyptian and UN brokerage and Qatari and US funding, as part of the humanitarian understanding provisions between Hamas and Israel — arrived in Gaza. On Nov. 17, a US delegation arrived to Gaza for a few hours to check out the hospital and oversee the entry of the remaining equipment.

On Nov. 17, Mohammed al-Emadi, Qatar’s ambassador to the Palestinian territories and head of the Qatar Gaza Reconstruction Committee in Doha, met with Walid Sayel, executive director of the Consolidated Contractors Company, which executes the project of the power generation station in Gaza. They discussed the implementation of the Israeli gas line project to supply Gaza with power, and Emadi said that he hopes calm would persist in the Gaza Strip so that Qatar, international organizations and the United Nations can solve the humanitarian issues in Gaza.

Hussam al-Dujni, political science professor at Umma University, told Al-Monitor, “There are two possibilities regarding why Hamas did not engage in the latest round of fighting. First, it might have realized that its participation would lead to violent Israeli aggression on Gaza, which would last for weeks and result in economic and human losses, further burdening Hamas. Second, Hamas and Islamic Jihad might not see eye to eye regarding the method of response to Abu el-Atta’s assassination.”

Hamas can see Palestinians’ anger in Gaza due to the tough living conditions and lack of harbingers of a serious economic breakthrough. But it is still trying to avoid a wide-scale military confrontation with Israel, out of fear to make things worse.

This means Hamas might initiate confrontation with Israel in the future, if it feels that Israel is stalling in keeping its promises and that its declared incentives were just trying to calm the Palestinians in Gaza without radically lifting the siege.