Has Hamas lost its monopoly on tunnel business in Gaza?

Islamic Jihad announced July 10 the death of one of its members after a tunnel collapsed, which signals that Hamas is no longer the only movement that makes use of tunnels in the Gaza Strip. 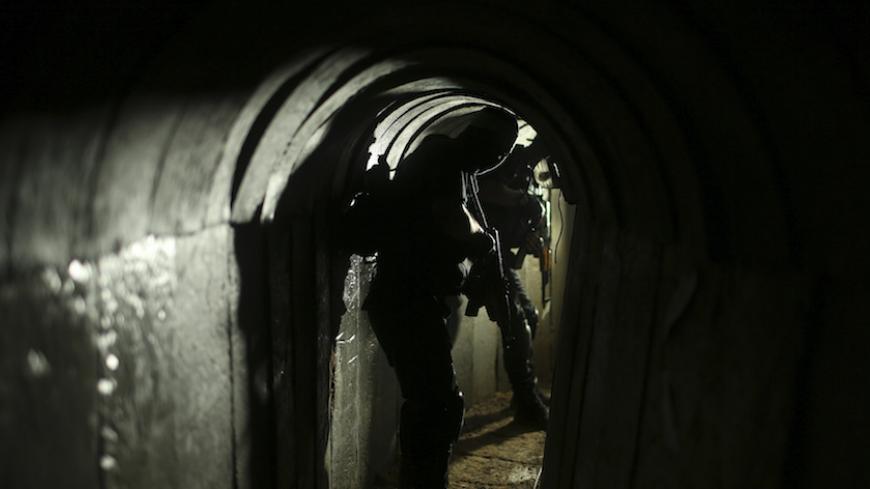 Palestinian fighters from the Izz ad-Din al-Qassam Brigades, the armed wing of the Hamas movement, are seen inside an underground tunnel in Gaza, August 18, 2014. - REUTERS/Mohammed Salem

GAZA CITY, Gaza Strip — Until recently, Hamas has been the only movement that has used tunnels since the Israeli siege on the Gaza Strip took full effect in 2007. Hamas' use of the tunnels had started to increase after the kidnapping of Israeli soldier Gilad Shalit in the summer of 2006 during a Gaza cross-border raid. Its use of the tunnels increased further during the 2014 war as it used the tunnels to launch missiles, carry out attacks against Israeli forces and kidnap soldiers. However, these tunnels appear to no longer be the preserve of Hamas — Islamic Jihad has joined in.

On July 10, Al-Quds Brigades, the military wing of Islamic Jihad, issued a statement in which it announced for the first time the death of one of its members following the collapse of a tunnel established by the resistance in the northern Gaza Strip. However, Al-Quds Brigades provided no further details on whether the tunnel was established by Islamic Jihad alone or jointly with Hamas.

In addition, local media sources reported July 18 the death of another member of Al-Quds Brigades due to the collapse of a tunnel east of Khan Yunis in the southern Gaza Strip. Then, Al-Quds Brigades merely issued a statement announcing the death of a “preparation martyr,” a term used by military wings to describe the martyrs who die while training, digging tunnels or trying out weapons to be used in battles. The brigades gave no further details about the incident.

Al-Monitor tried to communicate with military sources in Islamic Jihad, but those sources preferred “not to make any comment about the subject at this time.”

On the evening of July 28, Islamic Jihad organized the “Bond of Blood Festival” in the city of Rafah in southern Gaza in honor of the memory of the movement’s victims who died in the 2014 war. The military spokesman for Al-Quds Brigades delivered a lengthy speech that conveyed several messages. Chief among these was the message addressed to the Palestinian prisoners in Israeli jails. “Your freedom is a top priority and the proof is the blood of our ‘preparation martyrs.’ We will dig [tunnels] and fight the occupier in all arenas,” the spokesman said.

Asked to comment on the festival, expert in national security affairs Ibrahim Habib told Al-Monitor, “Islamic Jihad, the second-largest faction in Gaza, is seeking to keep up with Izz ad-Din al-Qassam Brigades, Hamas’ military wing, and it is sparing no effort to develop itself, especially as far as tunnels are concerned. Islamic Jihad has proved its ability to carry out qualitative operations behind the enemy lines such as the launch of rockets and the kidnapping of soldiers for swap operations that involve Palestinian prisoners.”

As part of the festival's military parade, Islamic Jihad exhibited military tools, including an advanced long-range missile that it revealed for the first time. It did not give details about its origin, name or range.

Habib said that the tunnels pose the biggest threat for Israel since the war in 2014, and that missiles are not Israel’s major concern; Israel's primary aim is to fight the resistance’s main weapon, namely the tunnels, by all possible technological means in a bid to stop any potential attack against it through those tunnels.

“The pace of tunnel digging increased after [the war in] 2014. Therefore, Israel is using technology and heavy equipment through a reinforced concrete wall that is dozens of centimeters thick on the border with Gaza. The establishment of this wall will take three years, according to Israeli estimates.”

In this context, Yedioth Ahronoth newspaper revealed June 16 an Israeli plan to build a concrete wall — starting in October — on and below the northern border of the Gaza Strip at an estimated cost of 2.2 billion Israeli shekels (about $576 million), to prevent the infiltration of the resistance’s members through the tunnels. The Israeli army discovered in April and May more tunnels leading from the Gaza border to inside Israel, as part of Israel's preparations for the next inevitable confrontation with Hamas in Gaza, which a military commander described to the newspaper as the “final one."

In spite of this, Habib believes “Israel is fully aware that the wall would not be a radical solution for the tunnels, as the resistance believes it is fighting 'a war of thoughts' and is working hard to find alternatives to any attempt to destroy, dump or bridge the tunnels with a concrete wall.”

For its part, Islamic Jihad told the media June 18 that Israel's decision to build the wall exposed the Israeli security system’s failure to fight the resistance tunnels.

In an interview with Al-Monitor, Islamic Jihad leader Khaled al-Batsh said, “Israel’s settlement activity and building of security walls is illegal and illegitimate and will not shield settlements from attacks by the resistance.”

Asked whether the Israeli escalation on the eastern border in early May would pave the way for a war between the resistance factions and Israel, Batsh said, “The decision is always in Israel’s hands because it is the one that has the army and the military gear. For their part, the [Palestinian] military factions should repel any aggression that targets the Palestinian people and take all the necessary measures in this regard.”

Meanwhile, al-Qassam Brigades' military sources told Al-Monitor that the establishment of tunnels is ongoing on the eastern border of Gaza, in preparation for any future battle with Israel. The sources did not provide any other information.

The website of al-Qassam Brigades published an Israeli military report made public by Israel's Channel 2 stating that the brigades is drilling about 10 kilometers (6 miles) of offensive tunnels a month in the Gaza Strip.

During a visit July 28 to Israeli towns bordering the Gaza Strip, Israeli Prime Minister Benjamin Netanyahu vowed to harshly respond to Hamas and Islamic Jihad should any of them break the truce announced by Egypt to put an end to the 2014 war.

“Calm for us is equivalent to calm in the Gaza Strip. Any attack on us will lead to destroying Hamas, Islamic Jihad and anyone who tries to attack us from the other party, and we will strongly respond to any attempt to attack our towns and citizens,” Netanyahu said.

In recent months, the pace of Israeli military movements along the southeastern part of the Gaza border has increased, as Israel blew up some of the discovered tunnels amid continuous combing operations aimed at preventing any surprise attacks prepared by the Palestinian factions. Meanwhile, the number of “preparation martyrs” is on the rise and both parties stand in close proximity with a more lurking attitude than ever before.