Despite setbacks, Hamas has been digging more tunnels and continues to flaunt them as a strategic weapon against Israel in propaganda videos. 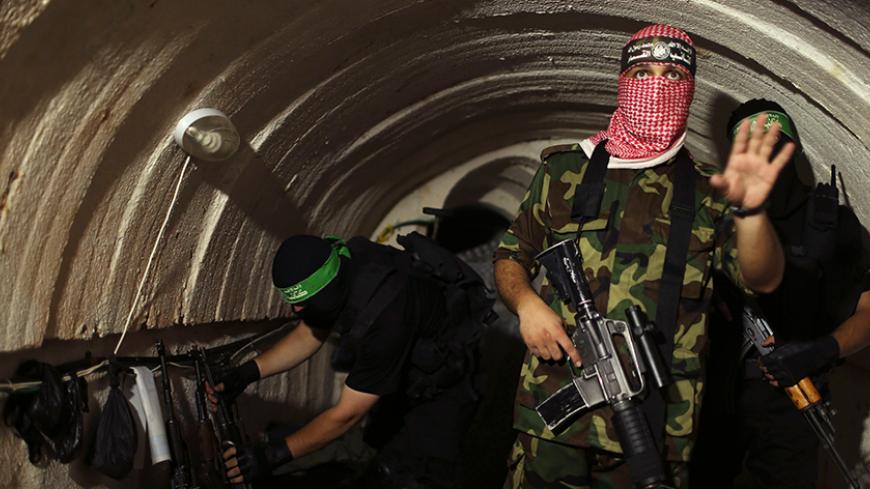 A Palestinian fighter from the armed wing of Hamas gestures inside an underground tunnel in Gaza, Aug. 18, 2014. - REUTERS/Mohammed Salem

GAZA CITY, Gaza Strip — Hamas’ military and political leaders constantly emphasize the importance of the tunnels that have become Hamas' main weapon against Israel in the Gaza Strip. Other weapons, such as rockets, have proven to be less effective, and Hamas' dependence on the tunnels is clear from the decline of the arms smuggling activity after the closure of the tunnels between the Gaza Strip and Egypt.

Now, Hamas members are digging new tunnels and restoring old ones that were destroyed during the 2014 war on Gaza.

Ten members of Hamas’ military wing, Izz ad-Din al-Qassam Brigades, were killed in three separate incidents of tunnels collapsing in late January and early February, in the east of Khan Yunis and in Gaza City's east and southwest.

On Jan. 29, speaking to thousands of mourners at the Great Omari Mosque in Gaza City for the funeral of seven al-Qassam Brigades fighters killed, Ismail Haniyeh, the deputy chairman of Hamas' political bureau, stated that the tunnels have become a strategic weapon.

Haniyeh added, “Underground tunnels brought death to our enemy and victory and glory to our people and nation.”

On Jan. 31 and during the procession for Hamas fighters who died in a tunnel collapse in the east of Gaza City, Abu Ubaida, the nom de guerre of a spokesman for al-Qassam Brigades, confirmed that the tunnel excavators and fighters are behind numerous military achievements, such as the Zikkim operation and the Gilad Shalit prisoner exchange deal. He stressed that their arduous efforts deterred Israel and represent a pressure card Hamas can use for the release of Palestinian prisoners.

In December 2014, al-Qassam Brigades formed a special tunnel unit responsible for digging and equipping tunnels and training fighters to use them.

A Hamas source told Al-Monitor on condition of anonymity, “There are three types of tunnels that are being dug: attack tunnels, which are dug along the border, tunnels used to launch rockets and tunnels used for securing the movement of Hamas members and leaders between the various regions, shielded from Israeli shelling, which are usually dug inside the cities.”

The source added, “Al-Qassam Brigades’ military victories achieved during the recent war through the use of tunnels, as well as the use of these tunnels in previous other operations such as the kidnapping of Israeli soldier Shalit and some other operations, encouraged Hamas to extensively invest in tunnels.”

Since the end of the 50-day war on Gaza in the summer of 2014, the military wing of Hamas has been issuing video footage of its fighters from inside the tunnels. Al-Qassam Brigades have even showcased some of their capabilities in reports and documentaries on their website and on TV stations such as Al Jazeera and Al Mayadeen, revealing the fighters’ ability to directly target Israeli soldiers.

Political analyst Mustafa Ibrahim told Al-Monitor, “Following the experience of the war between the Gaza Strip and Israel, al-Qassam Brigades are using tunnels as a strategic weapon and intend to develop them and use them extensively.”

Ibrahim added, “Hamas believes it has succeeded during the recent war in changing the course of the war after using the tunnels to carry out military operations against Israeli targets, soldiers and military equipment during the ground offensive. It was able to inflict large numbers of casualties among Israeli soldiers, which prompted it to develop this weapon into a strategic weapon.

“The rockets fired from the Gaza Strip into Israeli towns affect Israel, but the Iron Dome reduced their impact. Tunnels, on the other hand, cause the Israeli army substantial damage.”

On Feb. 3, al-Qassam Brigades leader Abu Hamza, another pseudonym, told the Hamas-linked al-Khaleej Online, “The border tunnels weapon has become one of the strongest weapons on which the resistance relies against the Israeli occupation. This weapon will have the final say and will turn the table on Israel’s intentions to wage a new war on the Gaza Strip.”

Abu Hamza went on, “In any future confrontation, Israelis will be surprised by the strength and solidity of these tunnels, which can withstand Israeli shelling and concussion bombs fired by the Israeli aircraft or tanks.”

He said that these tunnels can be used to “launch a large number of advanced rockets and mortar shells toward the Israeli towns adjacent to Gaza Strip, keep fighters away from Israeli radar, help them escape any Israeli attack and hide quickly when abducting Israeli soldiers.”

Since early 2015, 16 al-Qassam Brigades members have been killed in the Gaza Strip during the tunnel excavation works, 10 of them in 2016, according to statistics from the Al Mezan Center for Human Rights in Gaza.