Will Hamas respond to Israel's destruction of its tunnels?

Israel and Hamas are threatening each other with open warfare over Palestinian factions' tunnels that lead from Gaza into Israel, though military experts are divided on whether either side would take such action. 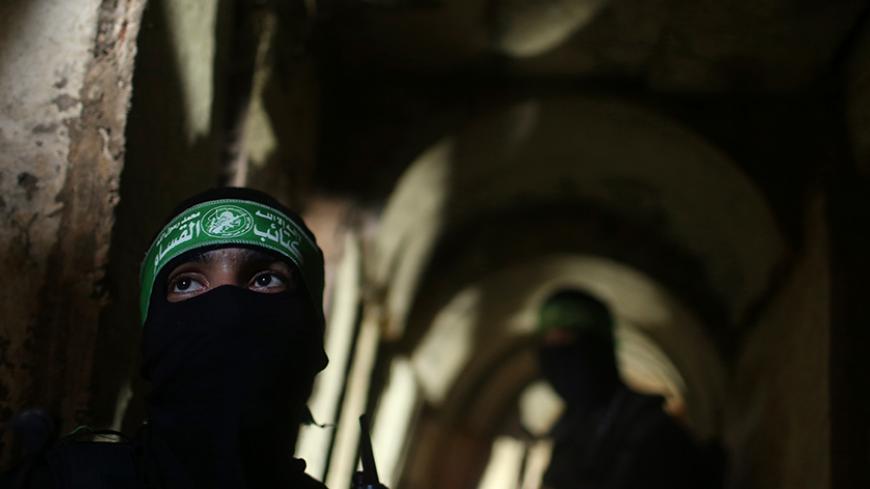 Palestinian fighters from the armed wing of the Hamas movement stand inside an underground tunnel in Gaza, Aug. 18, 2014. - REUTERS/Mohammed Salem

GAZA CITY, Gaza Strip — Hamas and other armed Palestinian factions in the Gaza Strip refer to the attack tunnels they dig toward Israeli settlements and military positions as a "strategic weapon" designed for any future confrontation.

On April 18, the Israeli army announced it had discovered two of the newest Hamas tunnels in the southern Gaza Strip. One tunnel was found near the Eshkol settlement east of Rafah in the southern Gaza Strip. This tunnel, Israel said, extended under Israeli borders about 150 meters (164 yards). The second tunnel was found May 5 near the Sofa crossing east of the province. Israel said its army infiltrated and destroyed the 200-meter-long tunnel.

Since 2004, the Israeli army has devoted $250 million toward detecting Palestinian tunnels. According to Israeli reports, the army found and destroyed 30 tunnels during the 2014 war in Gaza.

Palestinian factions warned that if Israel continues to destroy the tunnels, it could lead to a new military confrontation in the Gaza Strip. Meanwhile, Israel warned the factions of the same outcome if they continue to build tunnels. Several ministers, including Israeli Education Minister Naftali Bennett, and opposition leaders such as Avigdor Liberman have called on Israel to launch an attack on Gaza and destroy the tunnels before the Palestinian factions can use them against Israel.

Israeli military experts warn that a confrontation over the tunnels would turn into a war more brutal than the 2014 conflict.

For the first time since that war ended, Palestinian militants on May 4 used mortars and roadside bombs to attack several Israeli military vehicles searching for tunnels in the southern and eastern parts of the Gaza Strip. The Israeli army responded immediately by targeting Palestinian control points with artillery fire, raising the state of alert along the border and declaring the Nahal Oz area in the east a closed military zone.

The mutual shelling lasted four days, killing a Palestinian woman, a farmer. The shelling stopped after Egyptian efforts led to a truce, and Israel withdrew its tunnel-seeking vehicles.

Mujahedeen Brigades spokesman Abu Anas told Al-Monitor, "The Palestinian resistance will not stand idly against Israeli attacks, including the destruction of tunnels dug by the resistance and used to defend the Palestinian people."

He said the resistance will retaliate for any Israeli attack by launching a corresponding field attack. "The resistance is ready for all options. If Israel wants an open war, it will be surprised by the numerous military plans we have up our sleeves," he said.

Izz ad-Din al-Qassam Brigades, the military wing of Hamas, had issued an official statement April 18 saying, "The announcement by the Israeli army of the discovery of a resistance tunnel is nothing but a drop in the ocean of what is being prepared by the resistance to defend its people and liberate its sacred sites, territories and prisoners."

In an odd public disparity, Israel announced April 20 that it had blown up a tunnel it discovered in east Rafah, but that claim appeared to be discounted when, on May 3, several top Israeli officials visited that very tunnel. Israeli Prime Minister Benjamin Netanyahu, Defense Minister Moshe Ya'alon and army chiefs visited the site, then Netanyahu held a closed-door military and security meeting to discuss the security situation and find ways to reassure the Israeli settlers who are living in a state of fear because of these tunnels.

The tunnels were used for the first time in 2001, when Hamas fighters blew up the Israeli military Termit post on the Egyptian border with the Gaza Strip.

The tunnels were extensively used during the 2014 war by the resistance, allowing fighters to move easily, access Israeli army positions and hide from Israeli aircraft surveillance.

The Israeli army has announced on more than one occasion that it is conducting intensive drills to fight armed Palestinians in the tunnels in the event of a new confrontation. The Israeli army acknowledged after the 2014 war that the tunnels caused the highest number of casualties among its ranks, though Israel released no figures.

Palestinian military expert and retired Brig. Gen. Yousef Sharqawi told Al-Monitor that Hamas is unlikely to launch an attack against Israel and that its weapons are intended to protect Gaza residents.

"Hamas' weapons, including rockets and tunnels, are deterring any new Israeli aggression against Gaza. Hamas is threatening to hit Israel with these weapons, pushing it to think twice before launching any aggression," he said. "The Israeli settlers surrounding Gaza were seriously thinking of leaving their homes, fearing the tunnels dug by Hamas toward Israel. This pushed the Israeli army to intensify its search for those tunnels."

Sharqawi pointed out that Israel, funded by the United States, is building an underground "iron dome" to prevent the tunnels from reaching its territory.

Al-Majd website, which specializes in security issues and is close to the Palestinian resistance, said the resistance has been targeting Israeli military vehicles to keep Israel from detecting the tunnels and to end Israeli military incursions into the Gaza Strip.

"The fire opened by the Palestinian resistance represents a shift in the confrontation equation with the Israeli army. The confrontation is still at its early stages and most likely will not lead to the outbreak of an open military confrontation, but the predictions remain subject to developments on the field that may fall beyond the control of the parties at any moment," the group posted on its website.