A new report indicates that Israeli intelligence took advantage of the recent storm that hit the Gaza Strip to locate Hamas-operated tunnels by tracking storm damage and sinkholes. 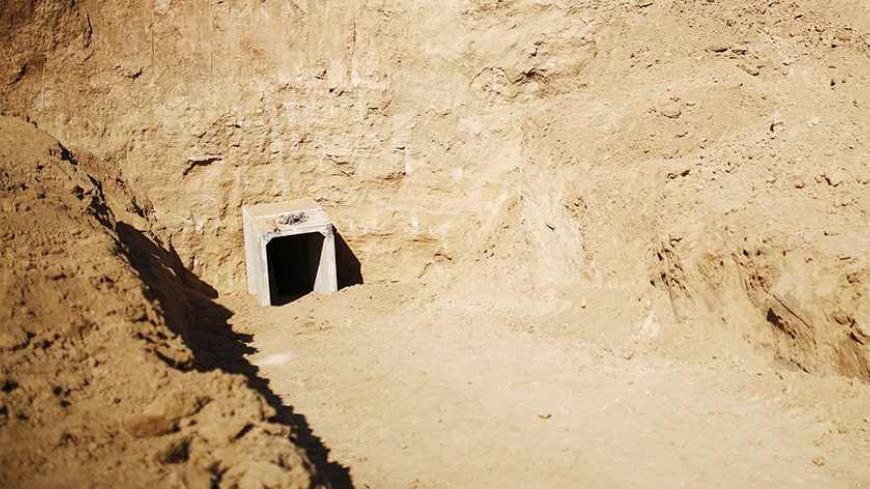 The entrance to a tunnel exposed by the Israeli military is seen near Kibbutz Ein Hashlosha, just outside the southern Gaza Strip, Oct. 13, 2013. - REUTERS/Amir Cohen

When it hit Dec. 10, Gazans were not aware that Alexa, the storm that buffeted the Gaza Strip, would have military and security repercussions. Local media sources reported that the flooding caused by the storm has revealed the locations of tunnels used by the resistance. This time around, however, the tunnels were located not only on the border with Egypt but in other parts of the Gaza Strip as well. As a result, the Israeli intelligence service deployed its agents to spot their locations.

Following the end of the storm and amid the resulting humanitarian crisis, Palestinians found out something they had not expected. a report published by Al-Majd, a Palestinian security issues website, announced that the Israeli forces had deliberately opened the dams and drowned a large swath of the Gaza Strip — particularly the border areas — with the aim of locating and destroying the tunnels established by the resistance.

The report added, “As soon as the storm started, Israeli intelligence immediately deployed its agents and secretly exploited its techniques in drowned areas to detect underground tunnels that were damaged by water.”

The Emergency Committee in the Gaza Strip confirmed Dec. 13, during the Alexa flooding that drowned a number of residential neighborhoods, that Israel deliberately opened dams built on the border with Gaza, resulting in major flooding that affected the areas of Wadi Gaza, Beit Hanoun and Wadi Salqa.

The Al-Majd report pointed out, “The tunnels constitute strategic weapons for the resistance in the coming battle and an obsession for [Israel], which is doing everything it can to detect and destroy them and thus limit their number.”

Naji al-Batta, an expert on Israeli affairs, told Al-Monitor that the Al-Majd report expressed a view of the battle to come from the perspective of a Hamas-affiliated security website.

Batta pointed out the growing concerns of the Israeli army concerning the “weapon of tunnels,” especially after last October’s discovery of the “Third Eye” tunnel, located to the southeast of the Gaza Strip.

“Israeli military experts expressed their shock at the ingenuity of the tunnel’s engineering. They said that an entire resistance battalion could enter [Israel] through this tunnel," he said. “This means that the tunnel would have given the resistance the ability to hit the Israeli army from behind and repeat the kidnapping of soldiers, after the success of the kidnappings in 2007, which led to the [prisoner exchange] deal [involving Israeli] soldier Gilad Shalit,” he added.

The Hamas-affiliated Al-Resalah newspaper cited geologist Yossi Langotsky, a retired colonel and former member of the Israeli military intelligence service, as saying, “The difficulty in dealing with the challenge posed by tunnels lies in the expansion of their deployment along the border between the Gaza Strip and [Israel], as well as the lack of intelligence information about their locations, paths and goals, not to mention the security apparatus’ delay in finding solutions to this dilemma.”

Batta told Al-Monitor that the Israeli army has deployed a unit on the border between the Gaza Strip and Israel, specifically in the areas to the east of Khan Yunis in the area of ​​Wadi Salqa, in a bid to locate the tunnels.

Other security sources refused to talk to Al-Monitor about what other media outlets had reported concerning sinkholes in the east of the Gaza Strip due to the damage inflicted upon the tunnels by the storm.

Al-Monitor also tried to reach a military commander in the field affiliated with the Izz ad-Din al-Qassam Brigades, the military wing of Hamas, but the commander refused to talk about the “weapon of tunnels” following orders issued by the leadership, he said.

Mamoun Abu Amer, another expert in Israeli affairs, told Al-Monitor in a telephone interview that the tunnels are the main concern of Israeli intelligence and pointed out that the tunnels were affected by heavy rains. “The storm led to results that serve the interests of Israel, given that the rains have revealed and damaged tunnels,” Abu Amer noted.

“Tunnels will be one of the resistance’s sophisticated means to succeed [in a confrontation with Israel]." he added. "The resistance will be able to move its means of attack through the tunnels, which would allow it to qualitatively and accurately hit its targets — similar to the method used by Hezbollah in the 2006 war. This would make the confrontation more problematic for the Israeli side.”

Abu Amer explained that the tunnels were one of the most important tools of the resistance during Operation Pillar of Defense. Hamas used them to hide its operations. This was proven by the decline in the death toll of fighters, according to Abu Amer.

Concerning the possible form of a confrontation between Israel and Hamas, Abu Amer said, “There is a new equation today between the parties, and the next battle will be between a party that has an enormous destructive capacity and another that has what it takes to get into Israel.”

“In the next war, Israel will be facing a great problem, unless it surprises us by using sophisticated counteroffensive equipment,” he continued.

Abu Amer noted, however, that the defense mechanisms currently used by Israel — such as the Iron Dome and David's Sling, among others — need a long time to reach a high level of effectiveness in confrontation, and the resistance has lead Israel to carefully consider any confrontation before venturing into it.

According to the report by Al-Majd, Israel deliberately opened the dams to hit two additional targets. On the one hand, Israel wanted to drown more areas and burden the population with more losses. On the other, it wanted to increase the burden of the government in terms of dealing with this damage and taking care of the families displaced from their homes, given its limited capacity in light of the blockade.

It is worth mentioning that the storm also revealed other tunnels in the Salam neighborhood, east of the city of Rafah. Citing sources from the National Security Forces deployed along the southern border and affiliated with the Palestinian government in Gaza, the Anatolia news agency reported major collapses in different parts on both sides of the border due to heavy rains, resulting in sinkholes, some of which reached as deep as 6 meters (20 feet), and the collapse of houses caused by tunnel collapses.

In a related context, Abu Amer said that it is too early to judge whether the shooting of an Israeli maintenance worker by a sniper on the eastern border with the Gaza Strip on the evening of Dec. 24 would lead to a dramatic change in the status quo.

“Israel can use a simple incident such as this one to change the scene, but that would be based on a political decision. Thus far, the incident is not deemed a strategy for an expanded counteroffensive,” he added.