Hamas and Islamic Jihad have instructed their members to minimize their use of cellphones, as they are monitored by Israel to pinpoint assassination targets. 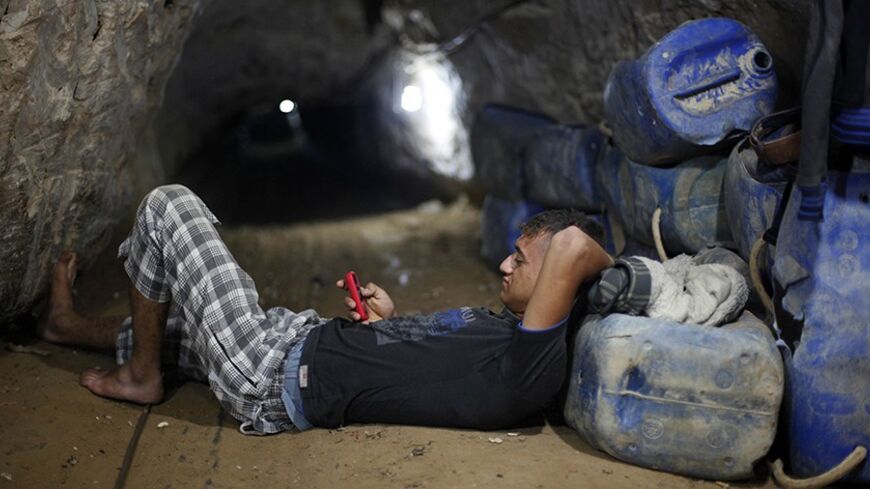 A Palestinian tunnel worker uses his mobile as he rests inside a smuggling tunnel beneath the Gaza-Egypt border, Gaza Strip, July 19, 2013. - REUTERS/Ibraheem Abu Mustafa

GAZA CITY, Gaza Strip — Israel is tracking Hamas members' movements via their mobile phones and using their "voiceprint" to carry out assassinations, according to reports from the Gaza Strip. Mobile phones are considered Israeli intelligence's most successful tool for tracking the movements of Gaza's various resistance factions. This comes at the end of a year of successive blows delivered by both Hamas security services and the resistance factions against Israeli spies and collaborators.

An official security source told Al-Monitor that there were cases in which resistance members were tracked and then assassinated through the use of mobile phones.

The security source, who spoke on condition of anonymity, said, “The resistance has issued a circular to its members, at specific leading levels, banning the use of mobile phones as facts have indicated that Israel is inclined to use this way to implement assassinations in the phase following any confrontation.”

Political analyst Mustafa al-Sawaf wrote in a Jan. 23 article published on Al-Aqsa Voice Radio’s website that Israel has returned to its policy of assassinations, which he described as “an old policy with a new technique.” This practice, according to Sawaf, was recently employed in the targeting of Al-Quds Brigades member Ahmed al-Zaanin. Zaanin was accused by the Israeli army of firing rockets toward Sderot during the Jan. 13 funeral of former Israeli Prime Minister Ariel Sharon. Zaanin's death was announced by both the Abu Ali Mustafa Brigades — the armed military wing of the Popular Front for the Liberation of Palestine — and Islamic Jihad.

On Jan. 19, Ahmed Saad was targeted — though not hit — with a rocket while riding his motorcycle in the center of Gaza City. Israel claims he is a prominent leader of Islamic Jihad and responsible for rocket fire from the Gaza Strip toward the Israeli city of Ashkelon.

Sawaf told Al-Monitor, “The multiple campaigns, which were announced by the [Hamas] government in 2013 and 2012 to give those collaborating with Israel a chance to turn themselves in and prosecute those who did not after its deadline, have affected the infrastructure of collaborators and revealed many of the tools used to infiltrate the Palestinian interior front.”

The danger posed by mobile phones to resistance members lies in the extraction of spatial coordinates even when the mobile phone is off, out of service or does not have a SIM card, according to a report posted on the Hamas-affiliated Al-Majd website.

Al-Monitor’s correspondent contacted the media office of the Izz ad-Din al-Qassam Brigades, the military wing of the Hamas movement. The office, however, refused to answer questions about the report, saying this information represents a threat to resistance members and should be protected from Israeli intelligence.

For his part, prominent Islamic Jihad leader Khader Habib spoke to Al-Monitor about the assassination policy, saying, “The occupation forces are not committed to and do not respect international laws and conventions. It is not surprising that they use different means to carry out massacres and assassinations.”

On the use of mobile phones as a tool to find assassination targets, Habib said, “The resistance is very vigilant and cautious about this option, and will take the necessary measures to avoid it.” Habib mentioned the assassination of Imad Akel, one of the most prominent commanders of the Al-Qassam Brigades who was assassinated by Israel in 1995 by a bomb planted in his mobile phone.

“We only expect additional aggression and massacres. The resistance is destined to defend its people and is ready to respond to any aggression,” Habib added.

The Al-Majd report cited a case in which Israeli intelligence notified a citizen from Gaza via his mobile phone — which had been turned off and had no SIM card — to evacuate his house before it was bombed. The report explained that any conversations taking place in the vicinity of any mobile phone may be heard, even if it is switched off or without a SIM card, as transmission from these devices can be enabled by those controlling its encrypted code.

Military analyst Naji al-Batta told Al-Monitor that Israeli intelligence relies on both technology and human resources to obtain its information. “Israel cannot hit the resistance unless it is sure of the target. The Israeli units recruit human resources to provide the intelligence. … It needs to be certain of the target,” he explained. “As for the technology component, this is the prerogative of Unit 8200, which belongs to the Aman military intelligence unit.”

According to the Al-Majd report, technological developments have turned the mobile phone into an agent that can spy on its owner. It is to be blamed, first and foremost, for the success of Israeli intelligence in reaching assassination or arrest targets through their voiceprints.

Retired military expert Maj. Gen. Wasef Erekat stated that tracking fighters through telecommunications is an old method. Israel used these technologies, considered advanced at the time, to track the Palestinian resistance in Lebanon during the 1980s. However, Erekat confirmed that even with technology, human resources are significant. He said, “There are still spies, and there always will be. Nevertheless, their Israeli command prefers to stop their work occasionally.”

Military analyst Youssef al-Sharqawi, who lives in Bethlehem, told Al-Monitor that Israel has been using mobile phones as an assassination tool against members of the resistance in the West Bank and Gaza Strip for a long time.

“The resistance will use disciples on the ground and old wireless phones and landlines instead of using mobile phones. In fact, Hezbollah has used a landline network, which was countered by Israel and the Lebanese government,” Sharqawi said.

The various resistance groups all prefer to keep quiet about their own technological capabilities, and refuse to make any statements about them. The November 2012 war revealed progress made by armed groups in military capabilities, particularly Islamic Jihad, but it remains an uphill battle as they try to keep up with Israel’s technological edge.