The Izz ad-Din al-Qassam Brigades, Hamas' military wing, published a video recorded by its secretive Frogmen Unit in the Mediterranean, claiming Israel was using dolphins to carry out espionage and combat missions off the shores of the Gaza Strip. 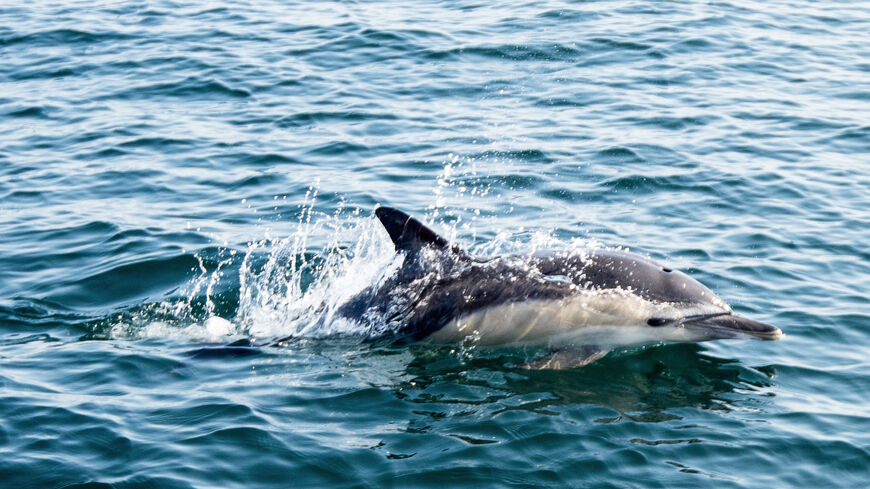 GAZA CITY, Gaza Strip — A video released by the Izz al-Din al-Qassam Brigades, Hamas’ military wing, on Jan. 8 showed military exercises carried out by the group’s naval commandos dubbed the “Frogmen Unit.” The video included footage of unit members off the coast of Gaza seizing a harness attached to the back of a dolphin, which included a holster for a gun- or spear-like device.

Al-Qassam Brigades claims the device is an “Israeli tool” intended to target its members.

Israel did not issue any official response to al-Qassam Brigades' claim.

The video showed photos of some members of the naval unit, including Mohammad Abu Samaan, Ahmad al-Louh, and Ali Bris who were killed in a car explosion a few meters from the Gaza port on May 17, 2021, during Israel’s operation “Guardian of the Walls.”

The military factions in Gaza had dubbed this same operation the “Sword of Jerusalem” battle. Fighting between the two parties lasted for 11 days, and ended on May 21, 2021, after Egyptian and UN mediation.

According to the video, Abu Samaan, one of the Frogmen Unit leaders, was the first to discover an Israeli army dolphin. He appeared in the recording carrying a harness he had taken from a dolphin. The video, however, does not specify the date of the discovery.

The first publicly announced naval operation by al-Qassam Brigades’ Frogmen Unit was during Operation Protective Edge launched by Israel against the Gaza Strip in 2014, which lasted for about 51 days. During this offensive, the unit infiltrated Israel through the sea and targeted the Israeli naval base opposite the Zikim military training base, on the shore of the Mediterranean on the northern Gaza Strip border with Israel.

Israel accuses Iran and the Lebanese Hezbollah of helping Hamas establish, train and provide equipment and weapons to the Frogmen Unit. The identity of the commander of this unit remains secret.

Mohammad Abu Harbid, a security analyst from Gaza, told Al-Monitor, “Israel’s use of animals for military purposes is plausible. In past years, Israel sent birds over the airspace of Arab countries. It claimed that they were used for research or scientific purposes.”

He added, “Several vultures were discovered in a number of Arab countries such as Lebanon, Sudan and Syria years ago wearing a tag reading ‘Tel Aviv University.’ These countries claimed the vultures were used to carry out spying missions by the Israeli intelligence services.”

It should be noted that many universities do use GPS tags to track migratory patterns of birds.

This is not the first time Israel has been accused of using marine animals for attacks. In 2010, following a spate of shark attacks off the Egyptian Red Sea coast, rumors circulated that the Mossad had released "killer sharks" to harm Egyptian tourism. Israel promptly dismissed those claims.

“There are hundreds of dolphins in the Gaza sea," Abdel Fattah Abed Rabbo, a professor of environmental sciences at the Islamic University of Gaza, told Al-Monitor, and the common bottlenose dolphin is "one of the smartest animals in the world.”

The United States and Russia have used dolphins for military purposes for decades, he said, "and Israel [may be] developing its capabilities in this field as well.”

Al-Qassam Brigades fighters are deployed at sea as well as on land, Abu Harbid explained, and the discovery by Frogmen Unit proves that it is expanding, despite the challenges imposed by the siege of Gaza since 2007. The unit has allowed Hamas to carry out land raids through the sea, as happened in the Zikim operation in the 2014 war.

“Al-Qassam Brigades’ discovery of the dolphin spy came as a surprise to Israel," Mustafa al-Sawaf, a political analyst close to Hamas and former editor-in-chief of the local Felesteen newspaper, told Al-Monitor. "This video is being released now for the first time, although it dates back to before the military confrontation in Gaza in May 2021.”

He noted that the video had unveiled only few details of what al-Qassam Brigades was able to discover.

Ibrahim al-Madhoun, a member of Hamas' national relations department, told Al-Monitor, “The Frogmen Unit, formed in absolute secrecy, is one of the most important units of al-Qassam Brigades. All of its members are Hamas members from the Gaza Strip, and they receive intensive training.”

“It is not easy to develop the Frogmen Unit’s capacities amid the Israeli siege," he continued, but al-Qassam "has attracted experts in this field to the Gaza Strip. Israel does not know how the unit was developed nor the distance that frogmen can reach. Al-Qassam Brigades is trying to keep this unit out of the media spotlight.”

The timing of the release, Madhoun argued, “was in honor of the Frogmen Unit’s members who died in the last war on Gaza. This unit discovered that Israel is using dolphins to track Al-Qassam Brigades’ marine commandos and carry out suicide attacks against its members.”

It seems al-Qassam Brigades’ frogmen have become a model for other resistance factions. Al-Quds Brigades, the military wing of the Islamic Jihad, featured members of its own naval unit it formed in November 2021 in one of the parades organized by the factions periodically in the Gaza Strip to showcase their military capabilities.

Several sources from Islamic Jihad refused to comment on its naval unit to Al-Monitor.