In a rare move, Hamas’ military wing claimed responsibility for a deadly shooting at a settlement in the West Bank, in a sign that the resistance may change tactics in its confrontations against Israel. 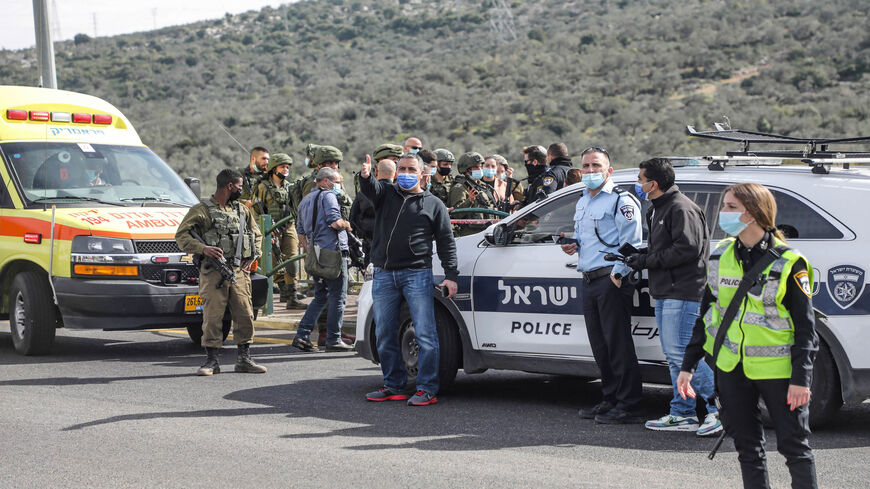 Israeli soldiers and policemen gather at the scene by the body of a Palestinian man who was shot dead reportedly while attempting a knife attack at the Gitai Avisar Junction, west of the Jewish settlement of Ariel and south of Nablus, West Bank, Jan. 26, 2021. - Jaafar Ashtiyeh/AFP via Getty Images

In a May 2 statement, al-Qassam Brigades said the attack came in response to Israel's “defiling and aggression of Al-Aqsa Mosque,” warning that it “will not be the last.”

The military wing further described the attack as “a qualitative operation that confused the enemy's systems.”

Al-Qassam Brigades has rarely claimed responsibility for such attacks in the West Bank in recent years. The recent move could usher in security challenges to the Israeli army. In a May 2 statement, Hamas said that by claiming “full responsibility” for the attack, al-Qassam Brigades is launching “a new phase of resistance to the occupation in the West Bank” as a retaliation to Israel's aggression of Al-Aqsa Mosque.

Hamas’ political bureau member Mahmoud al-Zahar told Al-Monitor that al-Qassam Brigades had to affirm its responsibility for the attack to send clear warning messages to Israel that its policy of killings and continued aggression at Al-Aqsa Mosque would lead to further attacks.

Zahar said, “Al-Qassam Brigades is asserting that the Palestinians are defending their land and their sanctities. Israel’s threats to assassinate Hamas leaders in the Gaza Strip are empty and worthless threats, since Israel would never announce beforehand an assassination attack. These threats are mere tactics. Israel carefully considers every step it takes for fear of the resistance's response.”

Al-Qassam Brigades had refrained from claiming attacks in the West Bank in recent years for security considerations. It seems that several reasons could have pushed it to go public this time. Most notably, Israel arrested two Palestinian suspects linked to the deadly shooting in the village of Qarawat Bani Hassan, who could eventually confess of being assigned by Hamas to carry out the attack.

Zahar added, “The attack aims to confuse the Israeli security and political system. Al-Qassam Brigades’ threats to carry out other attacks imply that confrontations in the West Bank and within the Green Line (Israel) are likely to continue. The recent attack asserts Hamas' commitment to fulfilling its threats and expanding its confrontation arenas and battlefields. It is as if Hamas wanted to say that rockets are no longer the only weapon and Gaza is not always the only battlefield.”

In the past, al-Qassam Brigades claimed few operations targeting Israelis in the West Bank. In August 2010, the group claimed an attack that killed four Israelis when Hamas gunmen opened fire on their car outside the Kiryat Arba settlement in the city of Hebron.

In February 2018, al-Qassam Brigades announced the death of one of its members, Ahmad Jarrar, who was the principal operative in the cell that perpetrated Rabbi Raziel Shevach ‘s murder near the settlement outpost of Havat Gilad, west of the city of Nablus in the northern West Bank on Jan. 9 of the same year.

Military analyst and former PLO artillery unit commander Wasef Erekat told Al-Monitor that al-Qassam Brigades’ announcement of being behind the Ariel attack shows that the Palestinians can no longer bear the pressure being exerted on them by Israel.

“The current remarkable development is that Palestinian military groups are owning up operations that were previously labeled as individual operations,” he noted. “This worries and disturbs Israel, as it reflects an upgrade in the Palestinian resistance performance and the credibility of its warnings and red lines. Things, however, may escalate, culminating into wide-ranging popular and factional confrontation.”

Erekat commented on the possibility of channeling the current escalation from the West Bank to the Gaza Strip in light of the settlers’ demand to return to the policy of assassination and the threats of a military operation in the West Bank, similar to Operation Defensive Shield in 2002. He said, “The Israeli government, the decision-maker in this respect, is fragile and weak, and on the verge of collapsing at any moment. Fearing failure, it could escape forward and invoke national security to wage a full-scale confrontation, but it realizes that any military action comes with consequences and a high price.”

Most recently, on May 5, three people were killed and many others injured in a stabbing attack in the town of Elad inside the Green Line. At least two attackers wielding an ax or a knife stormed a park in the town as Israelis celebrated Independence Day.

The repeated attacks inside Israel prompted angry Israeli reactions, demanding retaliation against Hamas in the Gaza Strip and a return to the policy of assassinations, specifically against Hamas leader in Gaza Yahya Sinwar. Israeli far-right lawmaker Itamar Ben Gvir called for bombing Sinwar’s home, accusing him of inciting the attack in Elad during a speech he delivered in Gaza April 30.

Israeli media circulated a video from Sinwar's speech, in an attempt to frame him as being responsible for the Elad attack. In his speech, Sinwar said, “Let everyone who has a rifle, ready it. And if you don’t have a rifle, ready your cleaver, ax or knife.”

Mustafa al-Sawaf, political analyst close to Hamas and former editor-in-chief of the local Felesteen newspaper, told Al-Monitor, “Al-Qassam Brigades’ claim of responsibility may mark the beginning of a new strategy against Israel in the West Bank through organized action. The next stage may witness similar operations.”

He ruled out, however, that these operations would trigger an offensive against the Gaza Strip. “The moment is not ripe for such a decision by the Israeli government, which is carefully weighing the repercussions of any confrontation in Gaza,” he argued.

Sawaf added, “Al-Qassam Brigades’ public announcement of carrying out the Ariel attack was made at the right moment according to a specific vision. Israel's threats, whatever they may be, will not deter Hamas from carrying out other operations, whether they were organized or individual. One thing is proven, Israel cannot easily face the attacks of the resistance, which is not giving up.”