Israel-Palestinian conflict back at center of Middle East agenda

The confrontations at Jerusalem’s holy sites, recent terror attacks inside Israel, the killing of Al Jazeera Palestinian-American journalist Shireen Abu Akleh, a dire Palestnian economy and a more assertive Hamas have put the Palestinian question back at the core of the region’s many issues. 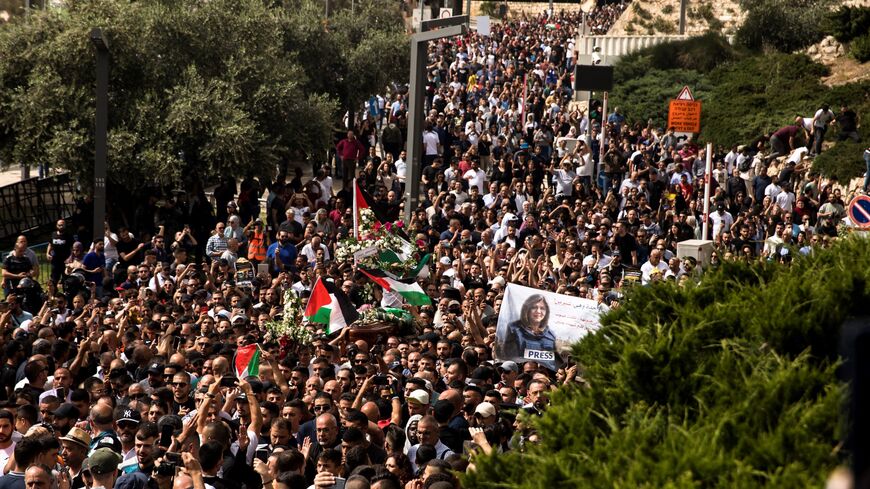 :Police officers clash with attendees of the funeral of Al Jazeera reporter Shireen Abu Akleh on May 13, 2022 in Jerusalem, Israel. According to eyewitnesses the Palestinian/American reporter was shot by a live bullet on Wednesday. She was covering an Israeli military raid in the occupied West Bank city of Jenin. - Amir Levy/Getty Images

It was just about six weeks ago, on March 27, that the Palestinian issue seemed relegated to the back burner when Israeli Foreign Minister Yair Lapid hosted his Abraham Accords counterparts from the United States, Morocco, Bahrain and the United Arab Emirates, along with the foreign minister of Egypt, as Ben Caspit reported here.

It was left to US Secretary of State Antony Blinken and Egyptian Foreign Minister Sameh Shoukry to keep the Palestinian issue toward the top of the summit agenda. Elsewhere, King Abdullah II of Jordan, custodian of the Muslim Holy Places in Jerusalem, seized the diplomatic initiative, anticipating the storm to come in Jerusalem given the coming intersection of the Muslim, Jewish and Christian holidays in April. See here the readout of the king’s meeting with US President Joe Biden on May 13.

This week, the agenda has defined itself.

Israel can’t win this one

"It seems that Israel cannot win the public opinion battle being waged across the Middle East and beyond over the May 11 shooting death of Palestinian-American journalist Shireen Abu Akleh in the West Bank town of Jenin," writes Ben Caspit.

Al Jazeera producer Ali al-Samudi, who was with Abu Akleh to cover the Israeli raid on Jenin on May 11, told Al-Monitor’s Ahmed Melham that "I told Shireen [who was wearing a protective press jacket and helmet] that they were targeting us and that we had to go back, and as soon as I turned around to return, I was hit in the back. Then Shireen started screaming ‘Ali is injured’ as I started running toward the street to get to a car to take me to the hospital.”

US State Department Spokesperson Ned Price referred to Abu Akleh’s death as a "tragic loss" and called for "an immediate and thorough investigation and full accountability."

The killing of Abu Akleh follows an escalation of violence centered around the Al-Aqsa mosque in Jerusalem during the Muslim and Jewish holidays last month, as well as terrorist attacks inside Israel, all of which has put Israel, the West Bank and Gaza on high boil.

On May 5, three people were killed and many others injured in a stabbing attack in the Israeli town of Elad, following a speech by Hamas leader Yahya Sinwar calling for "everyone who has a rifle, ready it. And if you don’t have a rifle, ready your cleaver, ax or knife."

The Izz ad-Din al-Qassam Brigades, Hamas’ military wing, had previously claimed responsibility for a deadly shooting April 29 that killed an Israeli security guard in the Ariel settlement in the Salfit district in the northern West Bank, as Melhem reports here.

"The repeated attacks inside Israel prompted angry Israeli reactions, demanding retaliation against Hamas in the Gaza Strip and a return to the policy of assassinations," especially against Sinwar, adds Melhem. "Israeli far-right lawmaker Itamar Ben Gvir called for bombing Sinwar’s home," accusing him of inciting the Elad stabbings.

Also on May 5, a high-level Hamas delegation was in Moscow for meetings, seeking support at a low point in Israel-Russia ties, as Rasha Abou Jalal reports here, although this outreach is unlikely to amount to much, as Ben Caspit explains.

The increased terror attacks have occurred as Israel has been expanding settlements in the West Bank, as Rina Bassist reports here, and with the Palestinian Authority losing support, especially after calling off elections last year, and a dismal economy (see below).

The Israeli security service Shin Bet came under scrutiny for not anticipating this wave of violence, including the killing of Israelis by Arab-Israeli citizens in March, allegedly inspired by Islamic State, as Ben Caspit reports here.

Two economic reports this month describe potentially failing economic conditions for Palestinians, made worse by the COVID-19 pandemic, and now the disruptions from the Russia-Ukraine war.

Highlights of the reports include: