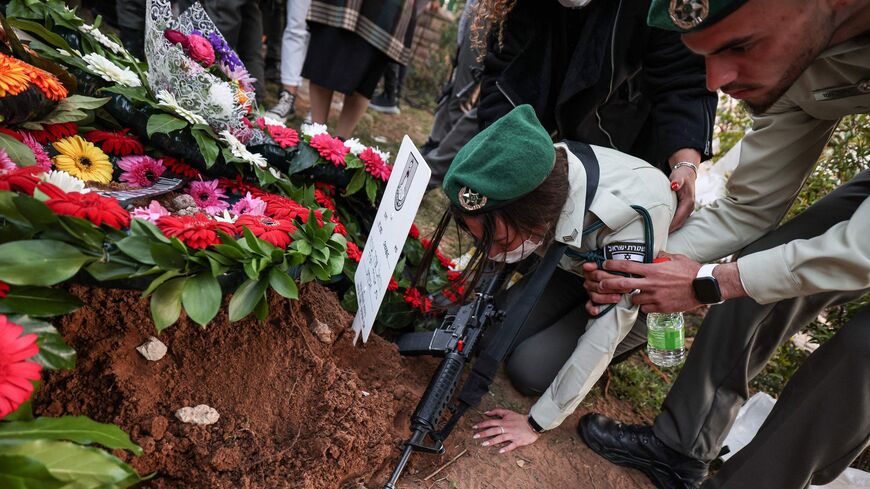 An Israeli border policewoman is comforted as she mourns next to the grave of her killed colleague Shirel Aboukrat during the funeral in the Mediterranean coastal city of Netanya on March 28, 2022. Two policemen were shot dead on March 27 in an attack claimed by the Islamic State group in Israel's northern city of Hadera. - MENAHEM KAHANA/AFP via Getty Images

A new wave of violence — a combination of armed Palestinian resistance in the West Bank and what many fear is Islamic State-inspired terrorism from within Israel’s Arab communities — presents Israeli Prime Minister Naftali Bennett’s fragile coalition government with its greatest test to date.

“Israel has not experienced such an intense terrorism spree since the second Palestinian intifada some 20 years ago,” writes Ben Caspit, referring to the popular uprisings against Israeli occupation and settlements in the West Bank and Gaza.

The highly regarded Israeli security agency Shin Bet is under scrutiny for its failure to head off a wave of violence inside Israel that has left nine Israelis and two Ukrainian workers dead in less than two weeks.

An Israeli raid on March 31 in the West Bank town of Jenin, ground zero of Palestinian resistance (see the report here by Ahmed Melhem), led to two Palestinians being killed and 15 injured, while on the same day a Palestinian stabbed and seriously injured an Israeli on a bus near the West Bank settlement of Elazar, near Jerusalem, before being killed by an armed civilian.

A clash in Hebron on April 1 between Palestinians and Israeli forces left one Palestinian dead.

Bennett has placed the country’s security forces on high alert and has called on all Israelis licensed to carry weapons to do so.

The perfect storm feared by Bennett includes possible concurrent escalations at flashpoints in the West Bank, East Jerusalem and within the Arab Israeli community. The convergence of Muslim and Jewish religious holidays over the next month adds to the potential for violence. The Al-Aqsa Mosque/Temple Mount site is sacred to both Muslims and Jews and has been the scene of numerous confrontations. Ramadan occurs April 2-May 1, and Passover April 15-23.

The most alarming aspect of the rise in violence for Israelis is that the Islamic State (IS) may be active within Israel’s borders.

• On March 22, an Israeli Bedouin and IS supporter killed four Israelis in Beersheba in the southern Negev Desert.

• On March 27, as the Abraham Accords ministerial summit was taking place two hours away, two Israeli Arab citizens, also with presumed links to IS, killed two Israeli police officers and wounded five others.

Shin Bet, Caspit adds, “is trying to understand how an active IS cell planned an attack under its radar and carried it out in the heart of Israel.”

In addition, on March 30, a Palestinian from Jenin shot and killed four Israelis in Bnei Brak in central Israel.

IS activity in Israel might be linked to its affiliate in Egypt’s Sinai. As our correspondent reports here, Egypt’s security authorities have been following up on the situation in the Sinai Peninsula following the appointment of Abu al-Hassan al-Hashimi al-Qurashi as the new IS commander, after IS-affiliate Wilayat Sinai pledged allegiance to the new leader.

The spectrum of Arab Israeli political parties and groups — “including the municipality of Umm al-Fahm, the Hura Local Council, the Joint List, the Ra’am party and even the High Follow-Up Committee for Arab Citizens of Israel, whose announcement received backing from the chair of the Northern Branch of the Islamic Movement, Sheikh Raed Salah” — condemned the terrorist attacks of March 22 and March 27, as Afif Abu Much reports.

The community, however, also bristled at what it considered a double standard in the criticism of some right-wing Israel parties of the United Arab List (Ra’am), led by Mansour Abbas, whose four members are aligned with the Bennett/Lapid coalition government, and therefore essential for its political survival.

Israel’s Arab citizens make up more than 20%, or about 1.9 million, of Israel’s 9 million citizens.

Abbas "made a point of harshly condemning the latest attacks and demanding that the Israel Police find and confiscate the massive amounts of weapons illegally available in Israeli Arab towns and villages," writes Caspit. "Still, if violence breaks out in Gaza, and if the IDF responds forcefully, Abbas would face a cruel dilemma over whether to keep his party in the government coalition. On this issue (and others), he and Bennett have a shared interest — preventing a flareup with Gaza that risks widespread deterioration, in both the security and political domains."

Shaked shakes up the Right

Bennett is already under siege from the political right, with some speculating that his New Right party partner, Interior Minister Ayelet Shaked, may be planning to break with the PM and work with former Prime Minister and Likud party leader Benjamin Netanyahu to topple the government, as Mazal Mualem reports.

Shaked was one of the last holdouts in Bennett’s party to agree to the alliance with Israeli Foreign Minister Yair Lapid in June 2021.

The coalition government is an alliance of the New Right (Yamina) party led by Bennett and centrist There is Future (Yesh Atid) party chaired by Lapid.

The disparate parties are united only in their opposition to Bibi and hold on to power with a thin 60-59 majority in the 120-member Israeli parliament (one member of the United Arab List party abstained from the vote).

Netanyahu is leader of the Likud party and the Knesset opposition. Likud received the most votes (24.9% of ballots cast) and the most Knesset seats (30) in last year’s election.

Bennett is also losing support among his usually reliable settler base. The Yesha Council (the settlers' umbrella organization) launched a campaign to topple the government because of the government freezing settlement construction in the West Bank, as Mualem reports here.

Palestinian issue back on front burner

Lapid hoped that the Palestinian issue would remain on the back burner when he hosted his Abraham Accords counterparts from the United States, Morocco, Bahrain and the United Arab Emirates, along with the foreign minister of Egypt, on March 27 for a discussion of the potential for a new alignment focused on boosting economic and security cooperation.

"Behind closed doors," Caspit writes, "Iran was reportedly the dominant issue, including the reported US intention to remove the Islamic Revolutionary Guard Corps from its list of terror organizations," about which US Secretary of State Antony Blinken got an earful.

It was left to Blinken and Egypt Foreign Minister Sameh Shoukry to keep the Palestinian issue toward the top of the summit agenda. Blinken had met with Palestinian leader Mahmoud Abbas the day before to nudge negotiations between Jerusalem and Ramallah.

The US secretary even included a paragraph about creating "the conditions for a negotiated two-state solution" in his closing statement at the Abraham closing session — more words about the topic than any of the other ministers except for Shoukry.

Meanwhile, King Abdullah II of Jordan has seized the diplomatic initiative to press for renewed steps toward a peace process between Israelis and Palestinians, especially in order to prevent escalation during the coming religious holidays.

The king met with Abbas in Ramallah on March 28, as Daoud Kuttab reports here, followed by meetings in Amman with Israeli Defense Minister Benny Gantz on March 29 and President Isaac Herzog on March 30, as Rina Bassist reports here.

Mulaem has the scoop here about divisions between Gantz on the one hand, who has been working to advance peace talks with the Palestinians, and Bennett and Lapid on the other hand, who reportedly are undercutting him.

Meanwhile, Mai Abu Hasaneen reports from Gaza that "Israel is seeking to prevent a recurrence of the war with Hamas and the Palestinian resistance factions in the Gaza Strip that broke out in May 2021, mainly due to the tensions that prevailed in Jerusalem during Ramadan last year. As part of these efforts, Israel announced that it will lift some restrictions imposed on the residents of Gaza to prevent any escalation during the Muslim holy month of Ramadan which starts at the beginning of April."

According to local experts interviewed by Abu Hasaneen, Hamas and Islamic Jihad could consider increasing their operations in the West Bank, where they are increasingly active, rather than from Gaza.