Egyptian mediation again in spotlight to prevent a repeat of Israel-Hamas war. 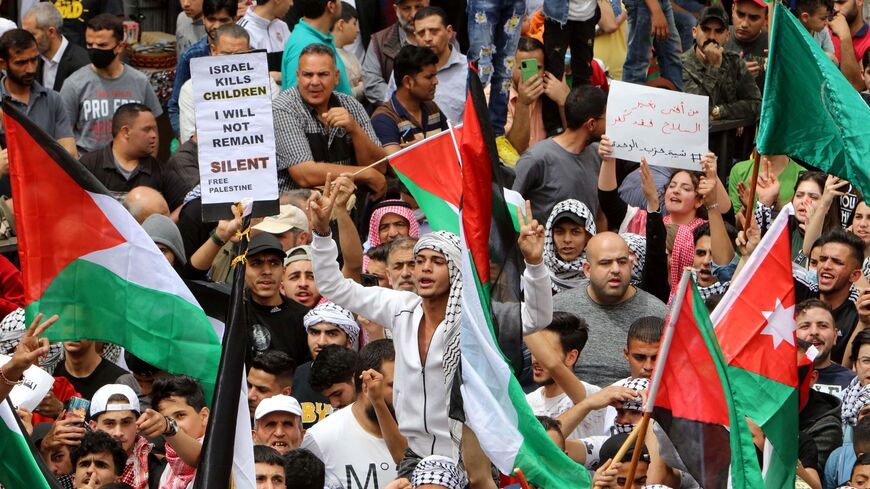 Demonstrators raise Palestinian and Jordanian flags as well as placards as they march in the streets of the Jordanian capital Amman on April 22, 2022, to show solidarity with Palestinians in Jerusalem, amid heightened tensions between them and Israeli forces in the Al-Aqsa mosque compound. Israeli police clashed with Palestinian protestors today in the latest violence at Jerusalem's flashpoint Al-Aqsa mosque compound, as the United Nations voiced deep concern at "escalating" unrest. - AFP via Getty Images

"Tensions at Jerusalem’s holy sites are running high and the Gaza Strip may be on the verge of tangling with Israel once again," writes Ben Caspit. "That is how holidays are celebrated in this part of the world."

Confrontations at the Al-Aqsa mosque compound, known to Jews as the Temple Mount, have flared the past week, threatening the fragile coalition government of Prime Minster Naftali Bennett and Foreign Minister Yair Lapid.

Ramadan (April 1- May 1) and Passover (April 15-23) overlapped this year, increasing the already high tensions at the holy sites.

The Bennett-Lapid government majority could collapse if it faces defections from either the far right, which would prefer a harder line on the Palestinian protesters, or if the United Arab List (Ra’am Party) withdraws from the government.

The coalition, united only in their opposition to former Prime Minister and Likud Party Opposition leader Benjamin Netanyahu, barely hangs on in a 60-60 parliament (Knesset), after a member of Bennett’s own Rightward (Yamina) Party quit last month, undercutting its previous one-vote majority.

Raam, with four members, suspended its participation in the government last week after more than 150 Palestinians were injured in protests at the Al-Aqsa compound.

Raam’s decision may oddly and ultimately rest with Hamas, the Islamic resistance movement which governs Gaza and is increasingly active in the West Bank. Its flags were flying during confrontations at Al-Aqsa on April 22.

Until this week, Hamas has mostly held back, working with and through Egyptian mediation, to prevent another all-out war like last year's.

But as the "resistance" mantle demands more than rhetoric, Hamas steps up the escalation. And if violence elicits more violence, Raam may be under pressure from its own constituency to withdraw from the government.

Bennett: ‘You have to act tough’

Bennett is pursuing a kind of dual track policy — shoring up his right flank in the parliament, while stepping back from further escalatory actions which could bring down his government and provoke even more violence.

The first track was on view this week when Bennett chastised CNN anchor Christiane Amanpour for saying Israel started the confrontation at Al-Aqsa Mosque on April 20, as Mazal Mualem reports.

"My responsibility as prime minister of Israel is to provide freedom of prayer to everyone in Jerusalem, including Muslims, which is why I had to send in policemen to remove the rioters," Bennett said. "And it worked. Indeed, 80,000 Muslims went on later to pray peacefully. So, you know, when faced with violence, you have to act tough."

"This interview was apparently intended for an Israeli audience, not just international consumption," adds Mualem. "Its purpose was to prove to Israelis that they have a prime minister from a right-wing party who does not show weakness when faced with clashes on the Temple Mount and Palestinian aggression."

Bennett’s second track is to refrain from actions which could trigger even further provocations, including limiting access of Jews to the Temple Mount compound until the end of Ramadan, and preventing a right-wing Knesset member, Itamar Ben Gvir, from leading a flag march through Damascus Gate on April 20, as Rina Bassist reports.

While these steps led to Bennett being assailed by some on the right, it gives space for Mansour Abbas, leader of the Raam Party, to hold off on withdrawing from the government.

Abbas is facing considerable pressure from the Shura Council, the religious authority from Raam, as well as derision from the Arab Joint List (the Arab opposition parties in the Knesset), and many Arab Israeli citizens, for his position. There is no formal mechanism for freezing membership in the government, so he is actually more in than out. Critics say he is trying to have it both ways, as Afif Abu Much reports.

Israeli Arab public opinion could push Abbas to withdraw if there is more violence. Life on the political edge for Abbas, and thereby Israel’s coalition government, may come to depend in part on what Hamas does next in Gaza.

Haniyeh: ‘We are at the beginning of the battle’

Hamas has until recently sought to keep the rhetoric high while acting with restraint.

That may be changing, partly as a result of pressure from Islamic Jihad and more radical factions, as Rasha Abou Jalal reports here from Gaza, and partly from the need to turn a crisis into an opportunity for its resistance bona fides.

Israeli Defense Forces (IDF) bombed Hamas targets on April 21 in response to rocket attacks from Gaza, in addition to a more visible Hamas presence at the Jerusalem demonstrations.

Hamas claimed Israeli police's decision to block far-right Jewish protesters from holding a flag march on April 20 as a victory, our correspondent in Gaza reports.

"Just as we defeated the so-called flag march, we will defeat the policy of intrusion. We are still at the beginning of the battle," said Ismail Haniyeh, head of Hamas' political bureau, in a statement on April 21.

"Hamas is trying to preserve its image of resistance among the Palestinian, Arab and Islamic public by claiming it has imposed four conditions on Israel with threats to escalate" against Israel from Gaza should the attacks in Al-Aqsa continue, writes Mai Abu Hasaneen from Gaza.

The recent escalation in terrorism and violence (15 Israelis killed in four attacks since March 22) has spurred the IDF to intensify its operations in the West Bank, with special attention to the northern town of Jenin, a hotspot of Palestinian resistance, where Hamas’s presence continues to grow.

"The IDF is back in massive force, running around in a somewhat futile effort to identify and stop potential lone Palestinian assailants, because throwing the IDF at a problem is what Israel does whenever it has no other solution," writes Caspit.

"Although the factions in Gaza pledged not to abandon the Jenin camp, anticipation and caution prevail in the area, as the residents believe that the Israeli army is waiting for the right opportunity to attack," writes Ahmed Abu Amer from Ramallah. "Meanwhile, the fighters are deployed every night in the alleys of the camp in anticipation of any emergency."

The Israeli crackdown, and resulting television images, elicited a harsh rebuke from Jordan, which convened a meeting of the Arab Ministerial Committee which deals with Jerusalem in Amman on April 22.

Participants in the meeting, which included ministers from the UAE and Morocco, two countries which have made peace with Israel via the Abraham Accords, backed Jordan with a strong condemnation of Israeli actions.

As much as 60% of Jordan’s population of 10 million is Palestinian, and King Abdullah II is the custodian of  Muslim and Christian holy sites in the city of Jerusalem.

"The fact that Jordan and the UAE unilaterally adopted the Palestinian narrative advanced by Hamas seems to be a diplomatic and public relations failure for Israel," writes Mazal Mualem. "Furthermore, Israel took a number of measures to avoid an escalation, including a decision not to impose a closure of the West Bank during the Passover holiday, despite alerts about potential terrorist attacks."

Calling the Arab rebuke a diplomatic failure, however, may be too strong, at least at this stage. Arab criticism of these annual violent clashes comes as no surprise. Jordan, in particular, faces immediate and direct consequences of clashes at the holy sites, and the Arab states will always have Jordan’s back.

But beyond some tough statements, it’s hard to see much consequence coming from the Arab states for Israeli actions.

The crisis puts the spotlight again on Egypt, which negotiated the Israel-Hamas ceasefire last year. Cairo is again positioned as the go-to diplomatic broker to prevent the present crisis from going from bad to worse. Mahmoud al-Sisi, deputy head of the Egyptian General Intelligence Directorate and son of President Abdel Fattah al-Sisi, led a delegation to meet between Israel and Palestinian factions. The fate of the Israeli government may ultimately depend on Egypt’s success.