The Takeaway: Are protests an incentive for Iran to close nuclear deal? 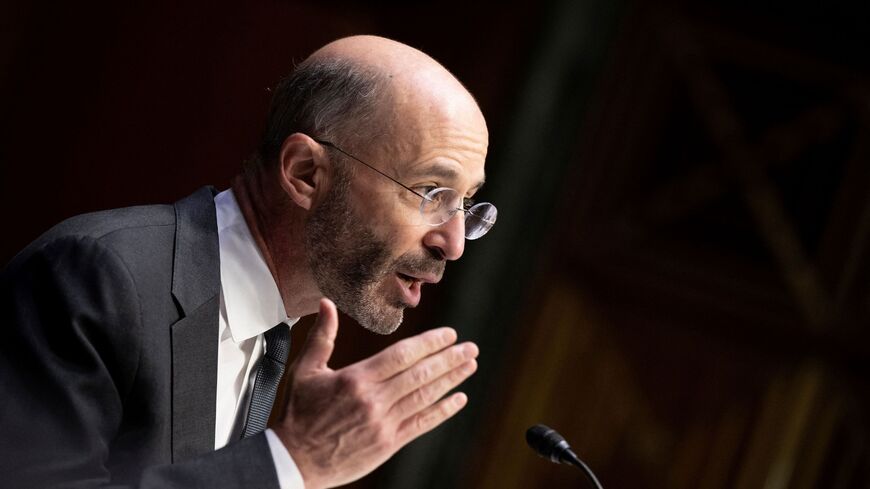 Robert Malley, Biden administration special envoy for Iran, testifies about the JCPOA (Joint Comprehensive Plan of Action) during a hearing of the Senate Foreign Relations Committee May 25, 2022, in Washington, DC. - BRENDAN SMIALOWSKI/AFP via Getty Images

US Iran Envoy Robert Malley told the Senate Foreign Relations Committee today, Wednesday, May 25, that "as I speak to you today, we do not have a deal with Iran and prospects for reaching one are, at best, tenuous." Elizabeth Hagedorn has the report on the hearing here.

And nonetheless, the slight hedge continues to be that the Joint Comprehensive Plan of Action (JCPOA), or Iran nuclear deal, still has a pulse.

Here are four reasons why.

The Iranian street has a vote

The price of oil

Senior Islamic Revolutionary Guard Corps member Hassan Sayyad Khodaei helped plot attacks against Israeli and Jewish targets before his assassination on Sunday, according to Israeli and Western intelligence assessments. Mossad is suspected in his killing, which comes as experts say the Israeli intelligence agency is operating on Iranian soil with growing intensity.

“Israel’s counterterrorism campaign has spread from hitting Iranian facilities in Syria into Iran itself,” writes Ben Caspit. In a brazen episode last month, Mossad agents reportedly detained and interrogated a state-hired assassin in Iran. Caspit writes there are growing indications that Israel has shifted its attention from countering Iran’s nuclear program to its terrorist activities, entrenchment in Syria and precision missile adaptation.

As Gulf Arab states seek to reduce their greenhouse gas emissions, the region’s dependency on cars is a major obstacle. Sebastian Castelier reports that heavily urbanized Gulf countries are trying to retrofit cities to encourage mass transit use. Dubai successfully launched the Gulf’s first metro network in 2009, followed by Doha a decade later. A long-discussed metro for Kuwait is “still in draft form.”

The Gulf’s hot climate discourages walking and cycling in city centers, but “urban planning analysts believe the solution in the Gulf lies in air-conditioned multimodal transportation nodes where passengers can switch from a metro train to bus, tram or even micro-mobility.”

Turkish Minister of Treasury and Finance Nureddin Nebati will visit Egypt next week, in what Rasha Mahmoud  calls a “significant step in Turkish-Egyptian bilateral relations following the rupturing of diplomatic ties in 2013.” But standing in the way of normalization is Turkish support for the Muslim Brotherhood, which Egypt considers a terrorist organization.

Turkey has worked to reduce the group’s influence, including by shutting down the Brotherhood-affiliated satellite channel in Turkey. “Ankara — trying to improve its ties with Gulf capitals and Cairo — appears to have realized that the movement has turned from an asset to a liability,” writes Pinar Tremblay. For their part, Brotherhood members are increasingly wary of Egypt’s fence-mending with Turkey and Qatar.

Israel has escalated its raids inside the Jenin refugee camp since veteran journalist Shireen Abu Akleh was shot dead in the West Bank camp earlier this month. Ahmad Melhem reports that Israeli forces have faced fierce resistance from the camp’s armed fighters, who have responded to the raids with gunfire and explosives. The Jenin camp is witnessing a daily war of attrition,” writes Melhem. Following the shooting death of one of its officers, Israel is now reportedly considering using combat helicopters and drones to provide cover for its ground troops in Jenin.

Hamas’ student wing, the Islamic Wafa bloc, scored a landslide victory in the student elections held this month at Birzeit University near the West Bank city of Ramallah. Hadeel Al Gherbawi writes that the election results reflect a shift in popular support for Hamas, which used a student debate to highlight the Fatah-led Palestinian Authority’s security coordination with Israel. “Students chose the resistance path,” a Gaza-based Islamic Wafa official told Al-Monitor. Such university elections provide students with a rare opportunity to vote in the Palestinian territories, which last held general elections in 2006.