Update from Moscow; US calls on regional allies for support against Russian attack on Ukraine; some facts on Russia. 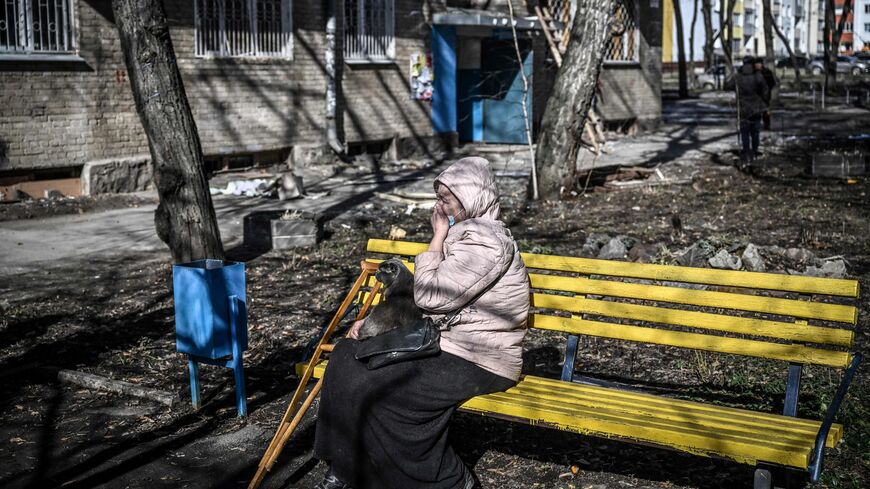 A woman weeps as she sits outside a building that was damaged by bombing in the eastern Ukraine town of Kharkiv on Feb. 24, 2022, as Russian armed forces launched a military invasion of Ukraine. Russian air strikes hit military facilities across the country and ground forces moved in from the north, south and east, triggering condemnation from Western leaders and warnings of massive sanctions. - ARIS MESSINIS/AFP via Getty Images

Top Biden administration officials are working the phones, seeking support from partners in the Middle East for tough US-led sanctions on Russia for its invasion of Ukraine.

In the Gulf, the US is also looking to oil producers for a boost in energy exports to mitigate the market disruptions as a consequence of the conflict.

We checked in today via email with Fyodor Lukyanov, chairman of the Presidium of the Council on Foreign and Defense Policy in Moscow, about what’s next re: Russia and Ukraine.

And here are just a few highlights of how the US-Russia showdown over Ukraine is playing out in the Middle East from our correspondents:

"Israel must position itself within the American camp," writes Ben Caspit. "The question is to what extent it will have to identify with it and take a proactive stand. The cooperation and coordination between the Israel Air Force and Russian forces in Syria is a unique strategic asset for Israel."

"Given the accelerated speed of nuclear agreement negotiations in Vienna between world powers and Iran, Israel cannot afford to give up its unfettered access to Iranian targets on its northern border," adds Caspit. "That is why it must keep [Russian President Vladimir] Putin calm."

Russia’s military intervention in Syria over the past decade changed the Russian military, especially its use of air power, foreshadowing aspects of its invasion of Ukraine.

"The Syrian campaign has become an important preparation for Russian armed forces to confront stronger adversaries than the small Georgian army or the Chechen separatist guerrillas," explains Kirill Semenov. "It was not certain whether the re-arming of the Russian army that began after 2010 could meet modern requirements, and the Syrian campaign became a test site for experimenting with these weapons in combat conditions."

With its more sophisticated use of air power in Ukraine and Syria, "Moscow is sending a signal to NATO that their military capabilities include the Middle East,” writes Anton Mardosov.

Following the invasion of Ukraine, expect Russia to intensify its ties to the Middle East, says Al-Monitor contributor Semenov from Moscow, in order to "circumvent sanctions" in return for security assistance and "mediation services in the field of conflict resolution, such as Yemen."

"At the same time, an open escalation, for example, in Syria can hardly be in Moscow’s interests now, as it creates additional risks, which will be more difficult to respond to, due to Russia’s involvement in the conflict in Europe," adds Semenov.

And no surprise that Syrian President Bashar al-Assad is all-in with Putin’s actions in Ukraine.

"Syria supports the Russian Federation," Assad told Putin in a phone call on Feb. 25, "based on its conviction of its right stance that repelling NATO expansion is Russia’s right, because it has become a global threat to the world and has turned into a tool to achieve the irresponsible policies of Western countries that seek to strike stability in the world."

Iran: No linkage yet between Ukraine, nuclear talks

Lukyanov told Al-Monitor this week that while Russia’s relations with the West "are deteriorating rapidly on the European front, Russian diplomats continue to work with others on the Iranian dossier. No changes yet, at least. There are some individuals who publicly call to start torpedoing the US at any occasion, including multiple diplomatic efforts not connected to the Ukrainian issue, but it doesn't seem they represent any line close to the real one."

The expectation of restoring the Joint Comprehensive Plan of Action (JCPOA), or Iran nuclear deal, may be just days away. Iran’s top nuclear negotiator, Ali Bageri Kani, left Vienna, the site of the talks, on Feb. 23 for consultations. It is unclear if the Russian invasion will affect Iran’s decision one way or the other.

Iran’s foreign ministry, not surprisingly, blamed the Ukraine war on "provocative moves by NATO spearheaded by the US."

"All that said should not suggest that Turkey has become a loser of the Russia-Ukraine conflict," adds Candar. "If his new openings to the Gulf and Israel bear fruit, Erdogan can live without playing a major role in the Russia-Ukraine crisis. Despite the erosion of his popularity inside and Western rebuffs over the Ukraine standoff, it is still too early to write him off."

Both countries are increasingly isolated from Washington and the West.

"Hemedti's visit comes at a very sensitive time for both countries," Saied adds. "Russia faces sweeping Western sanctions for ordering its forces to invade Ukraine, while the United States has threatened Sudan's military with sanctions against the backdrop of the coup that derailed the country's democratic transition."

Egypt: Tourism takes a hit, but Suez is open

Egypt is already experiencing a decrease in tourism from Ukraine and Russia as a result of the crisis, Ahmed Gomaa reports.

Meanwhile, Egypt has assured the international community that the war in Ukraine will not affect traffic the Suez Canal.

"The head of the Suez Canal Authority (SCA), Lt. Gen. Osama Rabie, recently said that the authority is ready for all possible scenarios," reports Mohamad Hanafi.

Russian exports to the Middle East