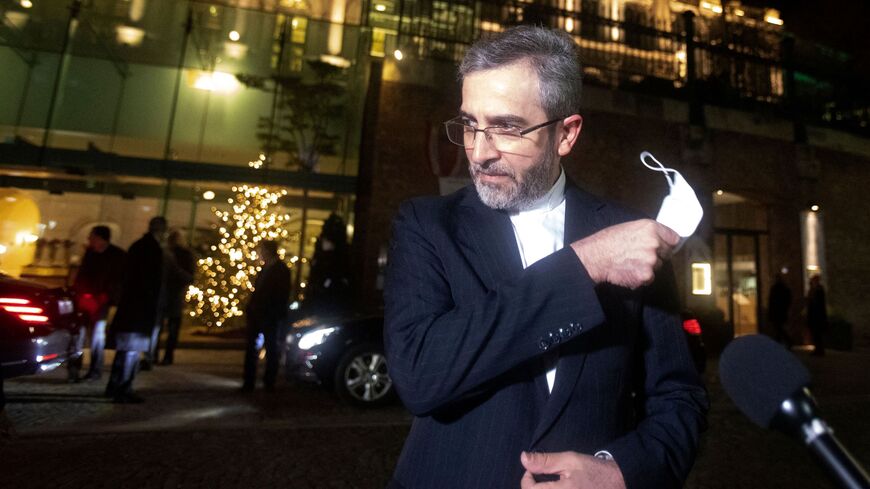 Iran's chief nuclear negotiator, Ali Bagheri Kani, speaks to the press in front of the Palais Coburg, venue of the Joint Comprehensive Plan of Action (JCPOA) meeting that aims at reviving the Iran nuclear deal, in Vienna on Dec. 27, 2021. - ALEX HALADA/AFP via Getty Images

Hot take 1 from Vienna: Kani returns to Tehran for sign off on ‘last mile’ of negotiations

Iran’s top nuclear negotiator, Ali Bageri Kani, is leaving Vienna for Iran for what might be the final sign-off on a deal which would restore the Joint Comprehensive Plan of Action (JCPOA).

Iran has been negotiating in the Austrian capital with the other JCPOA signatories — the UK, France, Germany, Russia, and China — and indirectly the United States, which withdrew from the deal in May 2018.

"We are in the last mile," reports Ali Hashem from Vienna. "The mood here and in Tehran has been mostly optimistic that a deal is within reach, with details over the sequencing of sanctions relief and Iranian nuclear compliance quite advanced, given the back and forth on the drafts. The prisoner exchange also seems part of the package, albeit via a separate channel."

Hashem elaborates, “There are major breakthroughs that logically makes a breakdown unlikely, and now is probably the time for Iranian officials to assess and see whether the bargain pays. Kani needs to be clear on the red lines before signing off.”

Hashem adds that it is unclear what impact, if any, Russian President Vladimir Putin’s actions in Ukraine may have on the Iranian negotiating stance.

Hot take 2: Russia so far not linking Iran deal to US posture on Ukraine

While the Biden administration has slapped Russia with an array of sanctions for its actions in Eastern Ukraine, the US and Russia remain mostly aligned in pressing ahead to close an Iran nuclear deal in Vienna.

"Moscow wants to restore the JCPOA. And Russia is good at compartmentalization when it decides to do so," says Samuel Charap, senior political scientist at the RAND Corporation. "Therefore, I don’t expect the Ukraine events to change Russian policy on the JCPOA."

"On other issues where Russia sees itself as doing the US a favor, we can expect negative linkage. But not this one," adds Charap.

Fyodor Lukyanov, chairman of the Presidium of the Council on Foreign and Defense Policy in Moscow, agrees.

"No linkage has been seen yet," Lukyanov tells Al-Monitor. "While relations are deteriorating rapidly on the European front, Russian diplomats continue to work with others on the Iranian dossier. No changes yet, at least. There are some individuals who publicly call to start torpedoing the US at any occasion, including multiple diplomatic efforts not connected to the Ukrainian issue, but it doesn't seem they represent any line close to the real one."

"As in 2015, Russia has no particular expectations" with regard to the benefits of a nuclear deal, if it happens, adds Lukyanov, who also serves as research director of the Valdai International Discussion Club. "Military cooperation, of course, but the Iranian market will be rather competitive then, and Iranians will have a broader assortment of sellers to choose from."

"Probably the increase of economic cooperation in the Eurasian framework" is the most promising, Lukyanov says. "There is a visible dynamic with the economic interaction, and sanctions against Iran did bar full-scale cooperation."

The unfolding conflict in Ukraine has created a delicate balancing act for Israeli leaders trying to manage relations with Russia and the United States. Israel has tended to distance itself from the issue, and in 2014 abstained from a UN vote sanctioning Russia for its annexation of Crimea.

But if forced to choose, Ben Caspit writes that Israel this time will "side with the United States despite its vested interest in security cooperation with President Vladimir Putin, whose troops cast a dark shadow over Israel’s northern front.”

Meanwhile, Turkish President Recep Tayyip Erdogan has criticized Russia's recognition of two breakaway regions in eastern Ukraine but kept quiet on any possible punitive action against Moscow. Nazlan Ertan takes a look at why NATO member Turkey has been walking a thin line on Ukraine. Cengiz Candar writes that “Ankara's response shows its limited capacity to play an active role in the crisis as a player that appears to be increasingly stuck between the Russian hammer and NATO's anvil.”

An Egyptian-directed film depicting the love story of a gay couple has sparked an uproar in Egypt following its screening at the Berlin Film Festival. “Bashtaalak Sa'at” ("Shall I Compare You to a Summer's Day?”) was written and directed by Mohammad Shawky Hassan and also stars several Egyptian actors. The film prompted calls for Hassan, who lives in Germany, to be stripped of his Egyptian citizenship for “promoting homosexuality.” As Ahmed Gomaa writes, such reactions to artistic freedom of expression are nothing new in Egypt.

Tensions are again running high in the East Jerusalem neighborhood that sparked the 11-day conflict between Israel and Gaza-based militant group Hamas last May. Sheikh Jarrah has witnessed near-daily clashes between Palestinian residents and police-backed Israeli settlers since far-right Knesset member Itamar Ben-Gvir set up a makeshift office in the neighborhood on Feb. 13. On Tuesday, a Jerusalem court froze the imminent eviction of a Palestinian family. But Ahmad Melhem writes there’s always a risk of renewed military confrontation between Israel and the Palestinian militant factions that pledged to defend Sheikh Jarrah’s residents.

The death of Islamic State leader Abu Ibrahim al-Hashimi al-Qurayshi brought some relief to Iraq’s Yazidi community, whose genocide Qurayshi is believed to have orchestrated. Essam Sabry Hafez spoke with a young woman who says she was personally held by Qurayshi as his sex slave in Raqqa. Like many Yazidis, she wishes the IS chief had been captured alive.

“I wish Qurayshi was arrested so that we could learn from him about the fate of the missing Yazidis, what happened to them and where they were taken after the fall of IS,” she said. An estimated 2,700 Yazidis remain missing.

Watch: Once home to one of the largest collections in Iraq of books, historic maps and manuscripts, Mosul University’s Central Library has reopened to the public eight years after it was left in ruins by the Islamic State.