Israel may be targeting Hamas leader Yahya Sinwar following the ax attack in the central city of Elad. 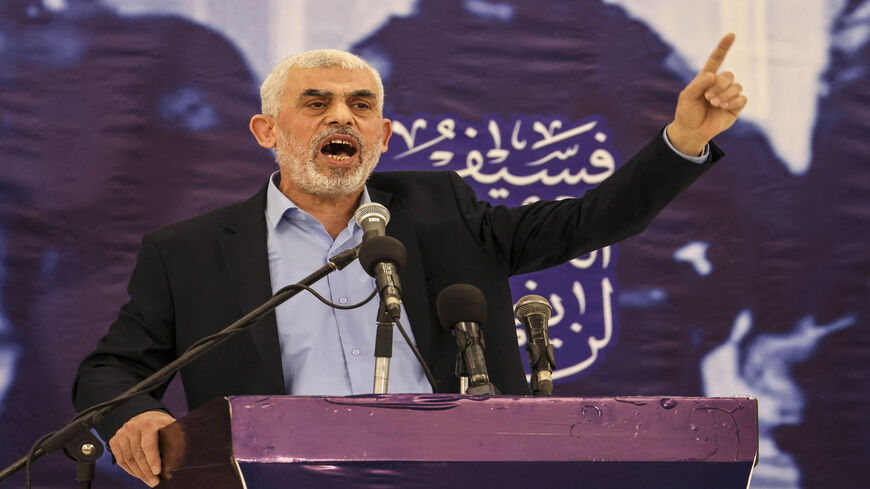 Yahya Sinwar, head of the political wing of Hamas in the Gaza Strip, speaks during a meeting in Gaza City, Gaza Strip, April 30, 2022. - Mahmud Hams/AFP via Getty Images

In his speech April 30 at Hamas’ annual ceremony celebrating the end of the Muslim holy month of Ramadan in the presence of Palestinian armed factions’ leaders, political leaders, women, and youth and tribal groups, Hamas leader Yahya Sinwar was seen standing in front of a photo of Israeli forces storming the courtyard of Al-Aqsa Mosque April 15.

On that Friday, Israeli forces fired tear gas and rubber bullets at Palestinian crowds inside the mosque in Jerusalem, and arrested 470 people, as they attempted to clear the courtyards from Palestinian worshippers to allow Israeli settlers to enter and hold Passover.

Sinwar pointed at the photo saying, “This picture shall not be repeated. Whoever makes the decision to allow that to be repeated has decided to allow the violation of thousands of synagogues across the world.”

Sinwar noted that Israel has been adopting racist practices against Muslims in Jerusalem by storming Al-Aqsa Mosque and seeking to divide it in place and time — assigning specific hours for Muslims and for Jews — which would change the current status quo and allow the construction of a third temple for Jews atop the ruins of the mosque.

He also pointed to Israel’s practices against Christians by preventing them from reaching the Church of the Holy Sepulcher in Jerusalem to celebrate Holy Saturday on April 23. Also, he said, it is marginalizing Jews who are not affiliated with the Zionist movement in some of Jerusalem’s neighborhoods, such as in Meah Shearim and Kerem Avraham.

Sinwar also vowed a first salvo of 1,111 rockets that would be fired at Israel in the next war. He said, “The number of rockets point at the date leader Yasser Arafat died [Nov. 11, 2004]."

At the same time, he stated that Hamas wants to give a chance to the popular resistance in Jerusalem, the West Bank and the Palestinians in Israel to grow and develop.

On May 5, which marks Israeli Independence Day, two Palestinians killed three Israelis and wounded several others using an ax in an attack inside a park in the Israeli town of Elad, east of Tel Aviv. In response, far-right Knesset member Itamar Ben Gvir tweeted May 5, “The Israeli air force should fire rockets at Sinwar’s house in the Gaza Strip because he is the instigator of the attack.” Meanwhile, Israeli journalists called for the assassination of Sinwar.

In response to the Israeli threats to assassinate Sinwar, Abu Obeida, military spokesman for Izz ad-Din al-Qassam Brigades, the armed wing of Hamas, said May 7, “We warn the enemy and its failed leadership that harming Yahya Sinwar or any of the resistance leaders will lead to an earthquake in the region, and the Sword of Jerusalem Battle [in reference to the 11-day conflict in Gaza in May 2021] will be but an ordinary event compared to what the enemy will witness.”

Sinwar said in his speech that Hamas will work with other parties in the “Jerusalem axis” — in reference to Iran and other forces including Hezbollah and the Assad regime in Syria — to operate a maritime line to the Gaza Strip in order to break the Israeli blockade. He said that consultations and preparations are in full swing for the inauguration of the line in the coming period.

Hamas spokesman Hazem Qassem told Al-Monitor, “The threats to assassinate Sinwar reflect the terrorist behavior that governs the [Israeli] security establishment and the Zionist media that is also involved in incitement to kill Sinwar. This confirms that by inciting the killing of Sinwar, the occupation is trying to hide its failure in the face of the operations carried out by Palestinians [inside Israel].”

He warned, “The Israeli occupation will be fully responsible for the repercussions of the assassination of Sinwar or any other Palestinian resistance leader.”

Hosam al-Dajani, political science professor at the Gaza-based Umma University, told Al-Monitor, “Sources close to Sinwar’s office confirmed that he meant in his speech that the international community’s silence about the storming of Al-Aqsa Mosque and the attempts to divide it in time and space and to tamper its legal and historical status quo [in reference to Jordan's custodianship of Al-Aqsa Mosque since 1954] may turn the Palestinians’ struggle with the Israeli occupation into a religious conflict.”

He said, “Sinwar wanted to tell the international community that there is a need to put an end to the continuous Israeli attacks against Al-Aqsa Mosque, so that the conflict does not turn into a religious one. Thus, Sinwar’s speech needs to be accurately understood.”

Dajani noted, “Sinwar will not give up Hamas’ policy document of 2017, which clearly confirms in its Article 16 that the conflict with the Zionist entity is not a conflict with the Jews due to their religion, but rather with the Zionist movement because of the occupation of the Palestinian lands. According to Article 37 of the document, Hamas refuses to interfere in the other countries’ internal affairs and adopts a policy of openness with all countries.”

Ibrahim Ibrash, professor of political science at Al-Azhar University in the Gaza Strip, told Al-Monitor, “Sinwar’s speech is a mere discourse addressed to the Palestinian public in Gaza, more than it is a threat to the occupation. This is because it comes amid an internal crisis within Hamas, which is committed to the understandings concluded with Israel after the May 2021 war, under which Hamas vowed not to carry out any military action in response to Israeli actions against the Palestinians in the occupied West Bank and Jerusalem, in exchange for an Israeli pledge not to target the resistance leaders and to allow passage of aid and funds [into Gaza].”

He explained that Sinwar’s speech reflects a crisis among Hamas’ leaders in the Gaza Strip, because the major leaders who have a strategic vision are based outside the Palestinian territories.

He added, “Exaggerating the talk about Sinwar’s assassination serves Israel, because it shifted the Palestinians’ attention relatively away from the real battle with the Israeli occupation in occupied Jerusalem and the occupied West Bank.”

Talal Okal, writer and political analyst for the local Al-Ayyam newspaper, told Al-Monitor, “The policy of Israeli assassinations of Palestinian political and military leaders is an old policy.”