Hamas is urging Arabs of Israel to escalate their attacks against Israelis inside Israel, as part of efforts to confuse the Israeli army in the event of a war with Gaza. 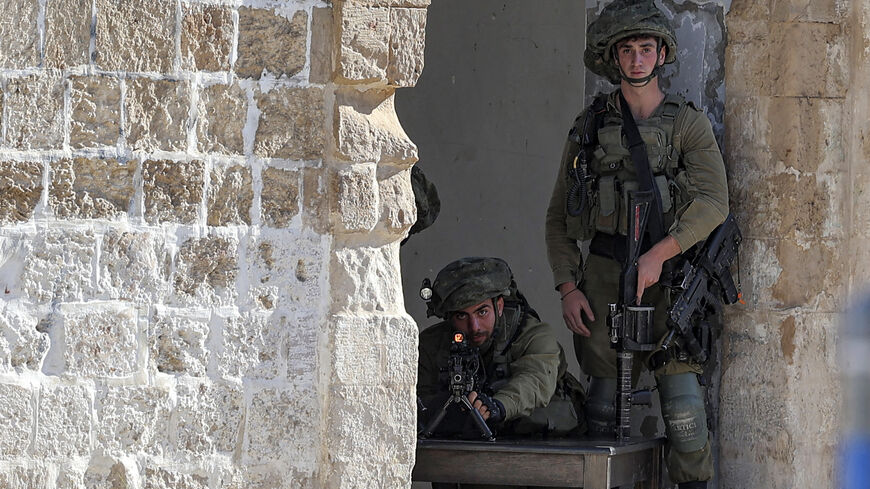 An Israeli soldier takes aim during a raid in the town of Rummanah, near the flashpoint town of Jenin in the occupied West Bank on May 8, 2022, reportedly the home of Palestinian Subhi Imad Abu Shukair, suspected of carrying out a fatal ax attack in the central city of Elad two days earlier. - JAAFAR ASHTIYEH/AFP via Getty Images

On May 5, which marks Israeli Independence Day, two Palestinians killed three Israelis and wounded several others using an ax in an attack inside a park in the town of Elad east of Tel Aviv

The attack came after Hamas leader Yahya Sinwar called in a speech before Palestinian dignitaries and elites on April 30 in Gaza for Palestinians to carry out operations inside Israel, whether with guns or white weapons such as knives or axes.

Sinwar also urged the Arab community in Israel to take part in operations inside Israel and expand their scope to include all Israeli cities. He added that Palestinians in the 1948 territory (Arabs of Israel) carry much more weight than Gaza’s military capabilities in the conflict equation.

The attack in Elad is the sixth of its kind inside Israel since mid-March, bringing the total number of Israelis killed since then to 17. Palestinian factions consider these operations to be a response to Israel’s “crimes and terrorism” against the Palestinian people and Al-Aqsa Mosque in Jerusalem.

The Arabs of Israel played a major role in carrying out these six operations, as three of the perpetrators were residents of Arab towns and cities inside Israel — two from Umm al-Fahm (in the north), and a third from the town of Hura in the Negev (in the south).

On March 12, Hamas formed the so-called National Authority for the Support of the Internal Palestinians (Arabs of Israel), which includes representatives of several factions, civil and community institutions, and legal and religious figures in southern Israel. This authority aims to support the struggle of Israeli Arabs against the Israeli authorities’ actions amid their continuous attempts to displace the Arabs from their villages, especially in the Negev in southern Israel, according to Hamas.

In this context, Hamas leader Yahya Moussa told Al-Monitor, “Hamas considers the Palestinians inside Israel to be an authentic part of the Palestinian people who refused to emigrate from their towns and villages in 1948, and is keen to strengthen their connection with the Palestinian cause.”

“This is why Hamas is seeking to activate the Palestinians inside Israel and encourage them to carry out operations inside Israeli territories in order to increase pressure on the Israeli government and bring it down. This is also aimed at confusing the internal Israeli front all the while reducing the pressure of the Israeli army and security forces on other fronts of confrontation such as Jerusalem and the West Bank,” Moussa added.

He indicated that Hamas seeks to open a new and continuous confrontation with Israel inside its borders through Israeli Arabs. This would greatly benefit Hamas in the event of a new war in Gaza, as the Israeli army would need to confront Palestinian military action on several fronts — not only in Gaza but also inside Israel, he explained.

Ayman al-Rafati, a writer and political analyst specializing in Israeli affairs, told Al-Monitor, “Hamas was very impressed by the spontaneous role that the Palestinians inside Israel played during the last war between Gaza and Israel on May 10, 2021, as they launched popular protests interspersed with confrontations with the Israeli army and security forces, and this destabilized the Israeli street.”

Coinciding with the 11-day Israeli war on Gaza in May 2021, popular protests erupted among the Arabs of Israel in several Arab cities inside Israel in support of the Gaza Strip. Roads were blocked and shots were fired toward Jewish communities, which led to the killing of two Israelis and chaos among Arab communities, most notably in the city of Acre in northern Israel.

Rafati said that Hamas believes the Arabs of Israel can carry out operations inside Israel in a less complicated way than the Palestinians in the West Bank.

“When a Palestinian from the West Bank decides to carry out an operation inside Israel, the hardest part is how to reach Israeli cities and towns and how to smuggle the tools of action, be they automatic or white weapons, because of dozens of Israeli checkpoints spread in the cities of the West Bank. However, the Palestinians inside Israel do not have this problem, as they live in Arab cities inside Israel, while some of them live in mixed cities, and this facilitates the implementation of operations inside Israel,” he explained.

Talal Okal, a writer and political analyst for the local Al-Ayyam newspaper, told Al-Monitor, “I believe that Sinwar’s tackling of the importance of the Palestinians inside Israel and their consideration as a heavier weight in the conflict equation than the military capabilities of the factions in Gaza aims at motivating them to confront Israel and carry out guerrilla operations.”

He indicated that Hamas believes Arabs inside Israel have advantages that other Palestinians do not have. Chief among these is having an Israeli identity card, which allows them to move freely and enter any place without obstacles, he noted.

Okal added that the Israeli security system also faces difficulties when it comes to knowing the intentions of the Arabs inside Israel due to the absence of organizational frameworks they belong to, as opposed to Palestinians in the Gaza Strip and the West Bank. He said that there is no Hamas or Islamic Jihad organization inside Israel, so they can be relied upon to carry out operations easier than any other Palestinians given how difficult it is for the Israeli security to unveil their plans.

Wadih Abu Nassar, an expert on Israeli political affairs and director of the Haifa-based International Center for Consultations, told Al-Monitor that the Israeli government is aware of the danger the Arab community poses to its internal security.

He pointed out that Israeli authorities have made several decisions and taken steps aimed at preventing Arabs inside Israel from carrying out operations inside its borders.

Chief among these steps, according to Abu Nassar, is an Israeli decision on April 9 to prevent any Israeli Arab from entering the city of Jenin in the northern West Bank, which is one of the most important sources of arms for the Arab community inside Israel.

Abu Nassar pointed out that Israeli security forces launched a campaign dubbed Wave Breaker on March 31, with the aim of thwarting Palestinian operations inside Israel before they occur by collecting intelligence information from Arab societies.

However, Abu Nassar said that this campaign miserably failed given the occurrence of three Palestinian attacks inside Israel that killed six Israelis since the campaign's launch.