The especially gruesome terror attack on Independence Day in which assailants attacked passers-by with axes might force Prime Minister Naftali Bennett to end Israel’s restraint in the Gaza Strip. 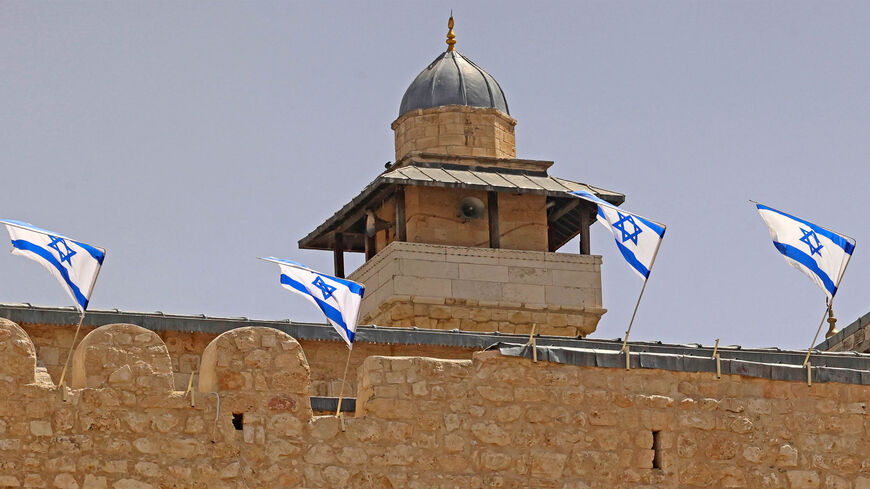 The Ibrahimi Mosque, also known as the Tomb of the Patriarchs, is decorated with Israeli national flags ahead of Israel's 74th Independence Day, Hebron, West Bank, May 3, 2022, - Hazem Bader/AFP via Getty Images

In the evening hours of May 5, two Palestinian terrorists shouting Allahu Akbar axed to death three Israeli men and wounded four others in the town of Elad. Police launched a massive manhunt to capture the attackers, whom it identified as As’ad Alrafa’ani, 19, and Sabhi abu Shakir, 20, both from the West Bank town of Jenin, a perennial hotbed of anti-Israel activity.

The horrifying killing spree could have strategic repercussions. Events of this kind have in the past marked watershed moments resulting in deep policy shifts. Such was the case when a suicide bomber entered the Park Hotel in the coastal town of Netanya in 2002 during a Passover celebration, blew himself up and killed 30 people. The attack and resulting shockwaves prompted then-Prime Minister Ariel Sharon to abandon a policy of relative restraint vis-a-vis Palestinian terrorism and order a massive military sweep of West Bank towns and refugee camps to rout out terrorist infrastructure. The operation, dubbed “Defensive Shield,” was considered to have effectively restored security to Israeli towns and villages.

Fast forward 20 years. The prime minister is Naftali Bennett, not Ariel Sharon, and the attack in the town of Elad east of Tel Aviv was far less lethal. In themselves, such numbers are hardly game changers. Israel has known far worse. But the Elad attack follows four other deadly terrorist attacks on Israeli urban centers and one deadly attack in the West Bank settlement of Ariel since late March, which claimed the lives of 15 people. The repercussions of these cumulative attacks are potentially wide-ranging, for three reasons.

First, the attack in the Elad town center occurred on Israel’s national holiday, Independence Day, amplifying its symbolic significance. Given the stringent security precautions on religious and national holidays, terrorism on Independence Day has not occurred in recent memory. The assailants took advantage of the celebrations that bring out hundreds of thousands of Israelis to city and national parks to mark the day with barbecues and parties. Elad lies just 3 kilometers (2 miles) from the West Bank, but the number of licensed gun holders who might have stopped the attackers is limited by the fact that many residents are ultra-Orthodox and do not serve in the military or security forces.

Second, the use of axes was particularly horrifying given the gruesome results, turning the stomachs of even the most terrorism-hardened Israelis who recall similar axe attacks during the second Palestinian uprising (intifada) from 2000 to 2005.

Third, the attack came just days after Gaza-based Hamas leader Yahya Sinwar, in a particularly graphic April 30 address, exhorted Palestinians to defend Jerusalem’s Al-Aqsa Mosque against what he described as Jewish desecration. “Whoever has a gun should prepare it, and whoever does not have a gun should prepare his cleaver, axe or knife,” he urged his listeners.

The fact that two of them appear to have followed his instructions will force Israel to shift its strategy on the Gaza Strip and possibly revoke the apparent immunity from Israeli retaliation that Sinwar has enjoyed thus far.

The implications of the mentioned factors are compounded by the political crisis following the April 18 decision by Ra'am, the Arab party representing the Islamic movement in Israel and ideologically affiliated with Egypt’s Muslim Brotherhood and Hamas, to suspend its membership in the ruling coalition. This, in conjunction with the recent loss of the coalition’s Knesset majority, could lead the battered government to throw caution to the winds, order a military operation against Gaza and renew its targeted assassinations of Hamas leaders, even of Sinwar himself.

Bennett’s relatively short political career has been marked by a measure of recklessness. As a member of previous governments, he urged aggressive and drastic retaliation for attacks from the Gaza Strip and elsewhere. During the summer 2014 war with Gaza, dubbed “Operation Protective Edge," he was the most outspoken member of former Prime Minister Benjamin Netanyahu’s Cabinet, Defense Minister Moshe Yaalon and military Chief Benny Gantz, in urging a tough crackdown on Hamas. He has previously urged “pounding” Gaza with prolonged aerial strikes to destroy the Hamas terrorist infrastructure. What will Bennett do now that he is at the helm?

Thus, Bennett faces a tough dilemma. He knows that any kind of military operation in Gaza would most likely force Ra’am to definitively quit the coalition. On the other hand, as mentioned, the fragility of the coalition might actually push Bennett to veer to the right in order to restore Israel’s deterrence against Hamas. He might opt for that option, in an effort to shore up his crumbling political base ahead of possible elections.

Would Bennett go as far as ordering Sinwar’s assassination? On the one hand, Israel has always declared Sinwar and his ilk fair game. His latest call to adherents to murder Jews was one of the boldest in recent memory. Former national security adviser Meir Ben-Shabbat, recounted in a recent interview with the Yedioth Ahronoth newspaper that Sinwar had written Netanyahu in his own hand, in Hebrew, during 2018 negotiations between the sides on a long-term truce, “take a calculated risk.”

An attack on Sinwar or other Hamas leaders would evidently sink Israel’s strategy of containment, which has resulted in prolonged calm on the Gaza border in recent months, put Bennett’s coalition out of its misery and douse hopes of Arab-Jewish cooperation prompted by the unprecedented partnership with Ra’am. The center-left flank of Bennett’s coalition, comprised of the Labor and Meretz parties, would certainly oppose such a declaration of war, which would also require a green light from Bennett’s centrist partners — Defense Minister Gantz and Alternate Prime Minister and Foreign Minister Yair Lapid. Bennett could probably count on the support of Finance Minister Avigdor Liberman and Justice Minister Gideon Saar, both of the coalition’s right wing. Israel’s security chiefs, which generally favor easing restrictions on Gaza’s civilian population, has not had its say, either.

Most of the potentially explosive dates on Israel’s spring calendar, including the convergent Ramadan, Passover and Easter observances have been crossed off. Still ahead later this month are Nakba Day on which Palestinians mark the “catastrophe” that befell them with Israel’s 1948 independence, and Jerusalem Day on which Jewish Israelis mark the 1967 reunification of East and West Jerusalem. Hopes of making it peacefully through these two events appear to have been dashed.

Following the Elad attack, the prime minister held consultations with his security chiefs. The outcome is unlikely to bode well for the Gaza Strip nor for Bennett’s political future.