The IDF, Shin Bet and Police manage to solve terror attacks and apprehend the perpetrators, but they are struggling with gathering information that should thwart attacks being planned. 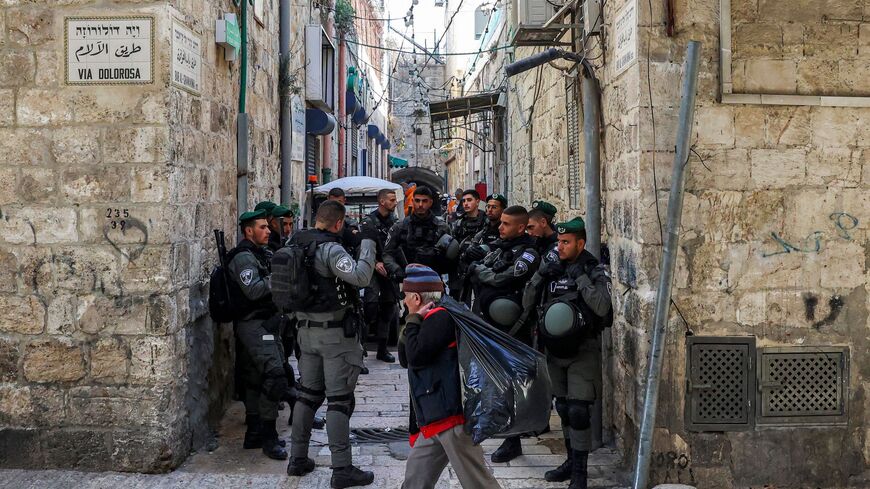 Israeli border police members gather by the Via Dolorosa in the old city of Jerusalem on March 28, 2022, as Israel raises its security measures. - HAZEM BADER/AFP via Getty Images

A series of terrorist attacks that have swept Israel since March 22 has claimed the lives of 19 people in the towns of Beersheba, Hadera, Tel Aviv, Bnei Brak, Ariel and Elad.

Security officials had hoped the attacks would peter out after the highly charged period of religious observances that converged in April, including the Muslim month of Ramadan, the Jewish Passover holiday and Easter. Their hopes were dashed in the evening hours of May 5 as Israelis were celebrating Independence Day when two Palestinians crossed from the West Bank into the ultra-Orthodox town of Elad, axing and knifing to death three Israeli men and seriously wounding two others.

The two terrorists from the village of Rumeineh near the West Bank Palestinian town of Jenin were captured after a massive 60-hour manhunt. The assessment of security forces that the two had not gone very far from the site of their killing spree was proven correct. They were found hiding within tangled foliage a few hundred meters away, exhausted, hungry and thirsty, having subsisted on avocados from a nearby plantation and a pigeon they caught.

The difficulty Israeli security forces face in this current terror wave is not necessarily solving the attacks or apprehending the perpetrators; rather, it is gathering intelligence on planned attacks before they are carried out. The difficulty lies with obtaining intelligence information about individuals unaffiliated with known terror organizations who are suddenly spurred by religious incitement, plan attacks and share their secret with no one or with only a handful of people.

Since the vicious ax attack in Elad, Israeli social media has been flooded with calls to assassinate the leader of Hamas in Gaza, Yahya Sinwar. The calls, echoed by senior pundits and columnists, were prompted by Sinwar’s April 30 exhortation to Muslim faithful to take up axes, knives and guns and murder Jews.

Reportedly, security officials were greatly displeased by this public discourse on social media and in all major television studios, pointing out that even if they had wanted to kill Sinwar, broadcasting their intention did not serve Israel’s interests. In fact, they argued, it only leads Hamas leaders to take precautions against exposure to Israeli assassination attempts.

In any case, Sinwar’s assassination does not appear to be on the current agenda of top security echelons given concern that killing him would turn him into a martyr who heroically incited anti-Israel violence in Gaza, Jerusalem’s holy Muslim sites, the West Bank and mixed Jewish-Arab cities in Israel. Security officials have said as much in briefings to reporters in recent days.

Those same unidentified officials even went as far as to say that Hamas, in general, and Sinwar, in particular, were riding on the wave of the terrorist attacks but were not instigating or leading it. They noted that the captured terrorists who carried out the Elad attack had told interrogators they were not members of Hamas and had not been guided by the organization. Intelligence information has not found any Hamas fingerprints on the latest attacks either, according to officials.

In light of these assessments, Israel’s only punitive measure against Hamas has been suspension of the work permits that allow some 12,000 Gaza residents to cross into Israel daily, cutting off badly needed remittances to prop up Gaza’s battered economy. Israeli sources cite intelligence information that points to heavy domestic pressure on Hamas following the permit suspension, but Israel does not believe local displeasure will force Hamas to abandon its wild anti-Israeli incitement.

Hamas, according to intelligence assessments, has a dual purpose in keeping up the incitement: embarrassing its bitter political rival, Palestinian President Mahmoud Abbas, and undermining his control of the West Bank; and preserving simmering anti-Israel sentiment and forging a strong and direct link between Gaza and the West Bank.

Israel’s troubles are not limited to Hamas and the Gaza Strip. Israeli officials are also unhappy with the Palestinian Authority’s (PA) response to the latest terrorist attacks. While the sides continue their close security coordination to confront shared threats by extremists, Israel views the PA’s official condemnation of the attacks as mere lip service countered by its ongoing support payments to the families of dead or jailed Palestinian terrorists.

The PA has so far rejected Israel’s suggestion of a joint inquiry to determine the circumstances of the May 11 shooting death of Al Jazeera journalist Shireen Abu Akleh during an Israeli raid on the town of Jenin. While the Palestinians say she was shot by Israeli troops, Israel has suggested she was killed inadvertently by Palestinians firing at the Israeli force.

In a parallel development, the Israeli military launched a monthlong drill this week simulating a war on multiple fronts. Just one year ago, the military was forced to abort the same drill due to violent clashes with Gaza prompted by the firing of Hamas rockets at Jerusalem. Given the complex events of these days, the drill may have to be scrapped once again.

by Murielle KASPRZAK and Joseph SCHMID | AFP | May 26, 2022
END_OF_DOCUMENT_TOKEN_TO_BE_REPLACED