Prime Minister Naftali Bennett decided to avoid collective punishment over the latest wave of terrorism, keeping Al-Aqsa Mosque open for Ramadan prayers and keeping the crossing points from Gaza and the West Bank operating as usual. 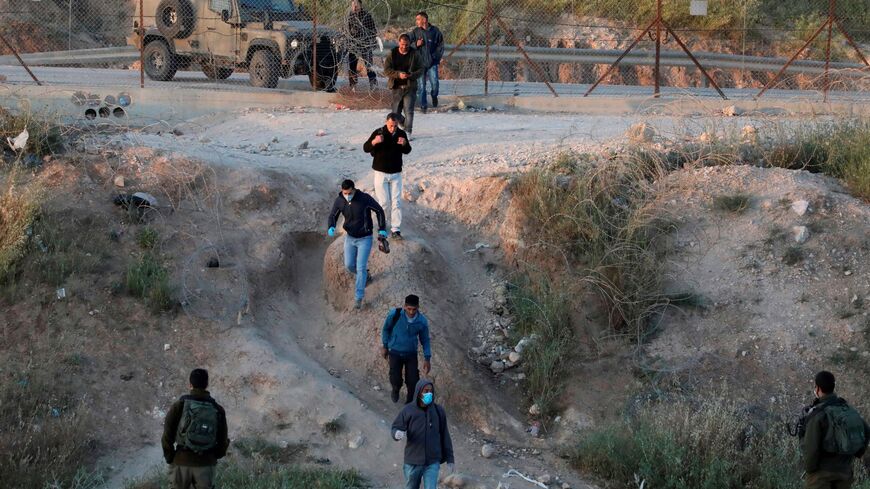 Israeli border police prevent Palestinian laborers from entering after illegally crossing Israel's barrier fence near the city of Hebron in the occupied West Bank, on May 3, 2020. - HAZEM BADER/AFP via Getty Images

The current wave of terrorism sweeping Israel could easily spur violence along several other fronts.

But for now, Israel is handling the latest spate of attacks (four significant attacks in three weeks) the way it did six years ago with a similar wave of attacks perpetrated by lone attackers unaffiliated with major organizations. The state is avoiding collective punishment, differentiating between the terrorists and the general Palestinian population, allowing Palestinian laborers with valid permits to cross into Israel for work and avoiding actions that might send others into the pool of potential terrorists.

The goal is to avoid escalation, to contain violence, to prevent unrest on other fronts and, most importantly, to keep Jerusalem’s holy sites from blowing up during the holy Muslim month of Ramadan and the upcoming Jewish Passover and Christian Easter celebrations.

Aside from ever-present threat of violence in east Jerusalem, and specifically the Temple Mount/Haram al-Sharif compound, the potential for conflagration is always high in the Gaza Strip. Tensions are simmering in the West Bank, particularly the Jenin region. Hezbollah in Lebanon remains a potential keg of dynamite, as do the mixed Jewish-Arab towns within Israel which were engulfed in violence last May.

Israel’s formal and less-formal allies in the Middle East have conveyed similar, clear messages in recent weeks — essentially that they accept Israel's right to self-defense against the Islamic State organization, and against terrorists from among Israel’s Arab population and Palestinian members of Hamas and Islamic Jihad.  However, the allies have urged Israel to maintain freedom of worship at the Al-Aqsa Mosque (on Temple Mount compound), Islam’s third holiest site, where any perception of Israeli aggression risks igniting the entire Muslim world.

The previous succession of terror attacks occurred in 2015-2016. Then-Prime Minister Benjamin Netanyahu's cabinet included two young politicians, Naftali Bennett and Ayelet Shaked. Both are now in the hot seat, Bennett as prime minister and Shaked as his loyal lieutenant and minister of interior. Netanyahu’s basic instinct was to use maximum force on all fronts, but he accepted the recommendations of security experts in favor of pinpointed, measured responses that did not affect most of the Palestinian population. Bennett and Shaked, ideologically to Netanyahu’s right, were unhappy at the time with his decision.

Six years on, the security recommendations remain the same, but Bennett is now at the helm and opposition leader Netanyahu is positioning himself as the hawk on Bennett’s right. Bennett’s initial instinct was to order an aggressive military operation similar to a massive raid 20 years ago on the Jenin refugee camp, a hotbed of anti-Israel activity. Then, just like Netanyahu, Bennett eventually accepted the experts’ opinion.

Troops and Shin Bet security agents have been operating recently in Jenin, from where the terrorists in two of the four recent attacks (in Tel Aviv and Bnei Brak) hailed. But unlike the broader 2002 operation, they are working methodically, carrying out detentions to glean intelligence, and foiling imminent terrorist attacks. For the first time in a long while, the military is no longer hesitant about entering the Jenin area, demonstrating its resolve by mounting raids in broad daylight and not just under cover of darkness.

Bennett's government is also allowing West Bank Palestinians to continue working in Israel, rather than sealing off the crossings in response to terrorism, as was often the case in the past. Tens of thousands of Palestinians with permits (and apparently an equal number of unlicensed ones) work daily in Israel and in the Jewish settlements in the West Bank, constituting one of the main pillars of the Palestinian economy. Israel has also restored work permits for Palestinians from Gaza, allowing some 15,000 to work in the communities surrounding the enclave. The pay difference is immense — NIS800 ($250) monthly, on average, for a Palestinian working in Gaza or the West Bank, compared with NIS8,000 ($2,500) in Israel.

Israeli security officials say remittances from workers in Israel provide a living for as many as 50% of the Palestinians. “The economy is one of the reasons for the relative calm in the past decade, despite occasional disruptions by terrorism,” a senior Israeli military official told Al-Monitor on condition of anonymity. “Our interest is for as many Palestinians as possible to work here.  Our interest lies in raising their standard of living, in having a water desalination plant in Gaza, in an expanding Palestinian middle class in the West Bank. It is almost more in our interest than in theirs.”

Under previous Shin Bet chief Nadav Argaman, the agency objected vehemently to allowing Gaza residents to work in Israel, arguing that some of them were being recruited by Hamas to convey messages and instructions to terrorists in the West Bank, and some were vulnerable to blackmail by Hamas.

But Argaman’s successor, Ronen Bar, is leading a different approach, and Israel has significantly increased the number of work permits for Gazans. “This is a policy of calculated risks,” a senior Israeli security source told Al-Monitor on condition of anonymity. “The Gazans’ work in Israel undoubtedly has a restraining effect on the Strip. We should strive to increase the numbers, while taking appropriate security precautions.”

The latest terror wave shows signs of abating. In the night hours of April 11, a Palestinian man was shot and killed after he tried to stab an Israeli policeman in the southern town of Ashkelon. The army operations continue in Jenin, thwarting anti-Israel attacks. All eyes are now on Al-Aqsa, which has been relatively calm since the start of Ramadan on April 2. This could obviously change at any moment.

“Every day that goes by without a terror attack is a dramatic day,” a senior police officer told Al-Monitor on condition of anonymity. “The copycat and inspirational elements of attacks have the most impact on events of this kind. The longer the calm lasts, the greater the prospects of the current wave petering out.” Once Ramadan ends on May 1, we will know whether this assessment was correct.