Following the three terror attacks at the end of March, Jerusalem is reaching out to Amman, Cairo, Abu Dhabi, Ankara, Washington and other capitals to prevent further violence. 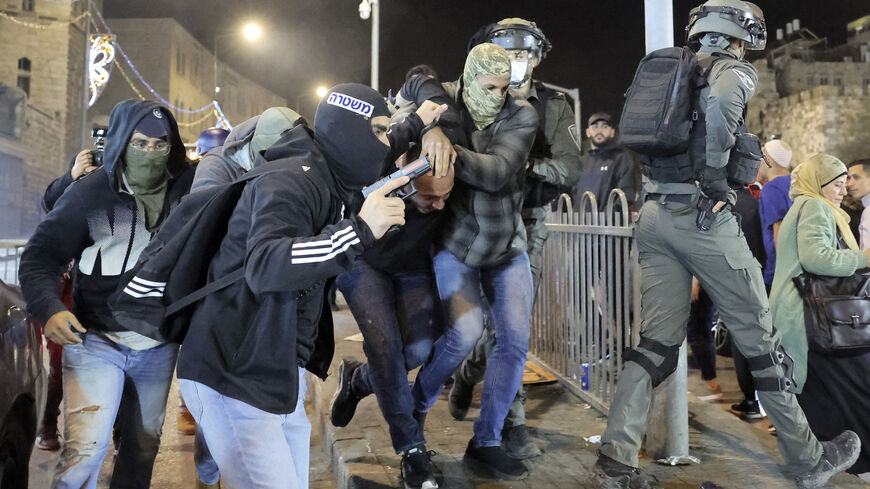 Israeli security forces detain a Palestinian man outside the Damascus Gate of the old city of Jerusalem late on April 3, 2022. - HAZEM BADER/AFP via Getty Images

Following the three terror attacks on March 22, March 27 and March 29, Foreign Minister Yair Lapid visited yesterday flashpoint Damascus Gate at the entrance to Jerusalem’s Old City. Accompanied by Police Commissioner Kobi Shabtai, Lapid expressed his support of Israel’s law enforcement agencies, tweeting, “I participated today at a situation-assessment meeting at the Jerusalem Police headquarters, together with Commissioner Shabtai, and then toured the Damascus Gate area. This is a difficult, tense period, but we have a police force that can be relied on to get us through this complex period. We give you full backing.”

The Palestinian Foreign Ministry issued a statement saying it "condemns in the strongest terms the provocative incursion by Israeli Foreign Minister Yair Lapid in the Bab al-Amud (Damascus Gate) area in occupied Jerusalem," adding it "strongly condemns the promises he (Lapid) made to Jewish extremists to deploy more occupation forces and police in Jerusalem under the pretext of providing protection for them during the Jewish holidays."

Still, in parallel to this visit, and in parallel to the Israel Defense Forces' preparation for possible escalation of violence, Israeli leadership has been engaged in recent days in diplomatic efforts to calm tensions. Israel currently tries pressuring the Palestinian Authority, Hamas and the Islamic Jihad in Gaza not to escalate tensions.

Reportedly, Prime Minister Naftali Bennett, Foreign Minister Lapid, Defense Minister Benny Gantz and senior officials in their respective offices have been working vis-a-vis Amman, Cairo, Abu Dhabi, Ankara, Washington and other capitals in order to prevent any further breakout of violence. Like Jordan, Turkey and Morocco have championed over the years the Palestinian cause, and especially in relation to east Jerusalem and the Muslim holy sites. Israel also believes Turkey has special relations with Hamas, hosting an office of the organization in Istanbul. Israel also makes a point of involving its close ally the Emirates in all regional efforts.

Yesterday, Bennett spoke on the phone with Jordanian King Abdullah II. Reportedly, the two leaders discussed the importance of lowering tensions between Israelis and Palestinians during the holy month of Ramadan. A statement issued by Bennett’s office said the Israeli premier “thanked the King of Jordan for his firm statement against the terrorist attacks that have taken place in Israel in recent days.” It also noted that the two leaders discussed “the importance of cooperation between the countries and the continuation of the ongoing relationship and dialogue.”

Bennett himself tweeted after the conversation: “I congratulated him (the king) and his people on the occasion of the month of Ramadan, and thanked him for his clear and important statement against the terrorist attacks. We will continue to strengthen the alliance and maintain contact with our neighbors.”

A statement by the Palace in Amman said the king emphasized “the importance of achieving calm in order to avoid any escalation in the Palestinian territories.” Reports said that the king asked Bennett not to limit in any way the entry of Muslim worshipers to the Al-Aqsa Mosque (at the Temple Mount compound), a request Jerusalem has yet to consider, contingent on developments on the ground.

Today, Bennett spoke on the phone with his counterpart from India, Narendra Modi, after postponing his planned trip to India this weekend because he contracted the coronavirus. A statement issued by Bennett’s office said the Israeli premier thanked Modi for condemning the recent terror attacks.

On March 31, far-right Knesset member Itamar Ben Gvir visited the Temple Mount compound. The sensitive arrival of Ben Gvir was approved by police. After the visit, the Egyptian Foreign Ministry issued a statement condemning “the Israeli escalation in the Palestinian territories in recent days,” especially recent visits by Jews to the Temple Mount in Jerusalem’s Old City, and denouncing the “continued incursions by Israeli settlers into the Al-Aqsa Mosque area under the protection of the Israeli police. Escalation must be avoided — especially during the holy month of Ramadan and Christian and Jewish holidays — so as to not slip into cycles of violence.”

As a reminder, while attending the March 29 Negev Summit in the south of Israel, the foreign ministers of Egypt, Morocco, the Emirates, Bahrain and the United States all condemned the terror attacks in Israel.  Morocco’s Foreign Minister Nasser Bourita said, “I would like to start by reiterating Morocco’s condemnation of the terrorist attack in Hadera. [Morocco’s] sincere condolences to the victims and our wish of [a speedy] recovery to the injured.”

Following the visit of Israel’s President Isaac Herzog in Ankara last week, Turkish President Recep Tayyip Erdogan condemned April 1 the recent attacks. According to a statement by his office, Erdogan spoke on the phone with Herzog, denouncing the “heinous terror attacks that recently took place in different cities in Israel. President Erdogan conveyed his condolences for those who lost their lives and wished a speedy recovery to the injured.”