With Ramadan, Passover and Easter converging, Israeli security agencies are on edge, especially in Jerusalem’s Old City and the Temple Mount compound. 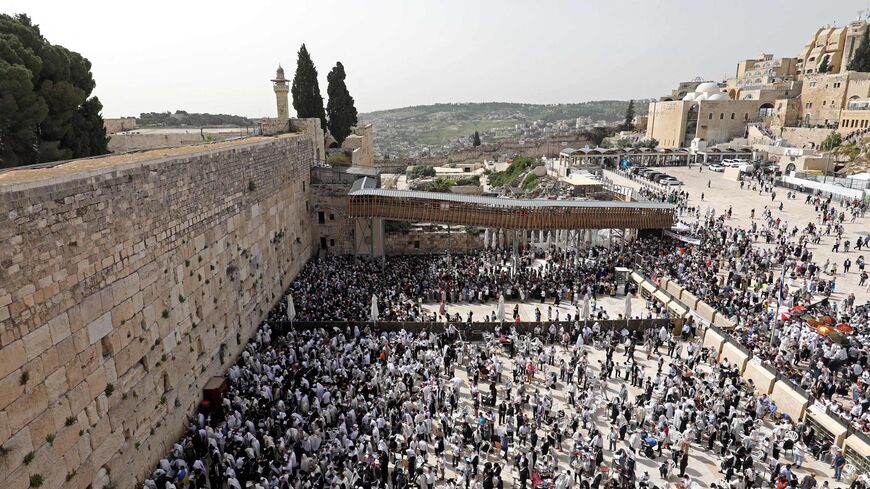 Jewish worshippers take part in a prayer during the Passover holiday at the Western Wall in Jerusalem's Old City on April 18, 2022. - GIL COHEN-MAGEN/AFP via Getty Images

The police force beefed up its presence in Jerusalem’s Old City this morning ahead of the traditional Passover prayer ceremony at the Western Wall Plaza. Around 2,500 police officers are securing the area. Tensions have been high in Jerusalem over the past few days, especially last Friday, on the Temple Mount Compound and Al-Aqsa Mosque. Israel's police force is staying vigilant today for possible clashes with Palestinians and overcrowding at the Western Wall Plaza. So far, no major incidents have been reported.

The Passover prayer, known as "the blessing of the priests," usually draws 15,000 Jewish worshipers to the site. Following the deadly stampede at the Galilee's Mount Meron last year, when 45 people were killed during a religious festival, authorities decided to split this year's Jerusalem Passover blessing into two sessions, one today and one on Wednesday. So far today, only a few thousand Jewish worshipers have arrived to the site for the prayer.

Israeli security forces have been on high alert across the country since the end of March, when a spate of terror attacks hit the country. Palestinians and Arab-Israelis assaulted and killed 14 Israelis in four attacks on March 22, 27 and 29 and April 6. The four attacks all took place in large cities: Beersheba, Hadera, Bnei Bark and Tel Aviv.

With Ramadan, Passover and Easter all celebrated so closely this year, Israel fears the violence will escalate. Still, despite the terror wave, Israeli authorities decided last week to keep the Temple Mount compound open for Ramadan prayers. The government also decided not to close crossing points from the West Bank and Gaza except for Saturday, the first day of Passover.

The tension is also palpable in the West Bank, where Israeli forces have been focusing on Jenin and its environs. This morning the IDF raided the West Bank village of Yamun, near Jenin, in search of terror suspects, wounding at least two people in exchanges of fire.

Several clashes have broken out on the Temple Mount between Muslim worshipers and Israeli police as tens of thousands gather for Ramadan prayers at the mosque. Early Friday morning, hundreds of Palestinians rioted and clashed with the police at the site, firing fireworks and throwing stones down onto the Western Wall plaza. Several Palestinians barricaded themselves in buildings on the compound. The riots ended with hundreds of Palestinians detained by police. Later on, police reopened the site for thousands of Muslim worshipers to attend Ramadan prayers.

On Sunday, Israeli police entered the Temple Mount compound again to stop young Palestinians from stockpiling stones and other objects that they planned to use against Jewish pilgrims, reportedly in reaction to rumors that Jewish activists were planning to perform a ritual Passover sacrifice on the compound. Jews can only visit the Temple Mount during certain hours and are banned from praying there.

Four Jews wearing prayer shawls were attacked yesterday in Jerusalem’s Old City on their way to the Western Wall. Two Palestinian teenagers attacked the worshipers, hitting them and kicking them. Both youths were apprehended later by police. Palestinians also threw stones at three buses arriving to the Western Wall area.

Addressing the security cabinet yesterday morning after hearing assessments from security agencies, Prime Minister Naftali Bennett said Israeli forces have “free rein” to maintain security and restore calm. Bennett said that effort should be made to allow all religions to celebrate their holidays peacefully in Jerusalem while “continuing to deal with rioters who violate public order.” He said, “Security forces are prepared for any scenario.”

Jordan’s king slammed Israel yesterday for allowing Jewish pilgrims to enter the site, calling upon it to respect “the historical and legal status quo” there. A statement from palace in Amman read, “His Majesty King Abdullah II directs the government to continue regional and international efforts to stop Israeli escalation and lobby for an international position that exerts pressure on Israel.” Jordanian Foreign Minister Ayman Safadi summoned today Israel's Charge d'Affairs in Amman- Sami Abu Janeb, to the ministry, to discuss "Israel's recent steps in the Temple Mount." Foreign Minister Yair Lapid convened today a meeting in the ministry, to discuss Temple Mount tensions with Amman.

The Muslim cleric of the Islamist Ra'am party, Sheikh Mohammad Salameh Hassan, called yesterday for the party to quit the coalition. "This coalition attacks our holiest of holly sites in Palestine. God does not answer to a government that attacks children, women, old and young people, journalists and others, using its police force. If we don't speak out, we have no good in us, and if you refuse to hear us, you have no good in you," he said.

After Hassan's call, Ra’am leader Mansour Abbas suspended the party’s membership in the coalition. The suspension will reportedly last just two weeks and have no practical consequences, as the Knesset is now on recess. Still, the move greatly destabilizes Bennett’s government, which already lost it majority two weeks ago. Coalition whip Idit Silman, a member of Bennett’s Yamina party, quit the coalition April 6 and joined the opposition, robbing Bennett of his majority. Abbas' decision to temporarily freeze his party’s membership in the coalition was reportedly coordinated with Bennett and Foreign Minister Yair Lapid as a way to prevent the government from breaking up entirely.