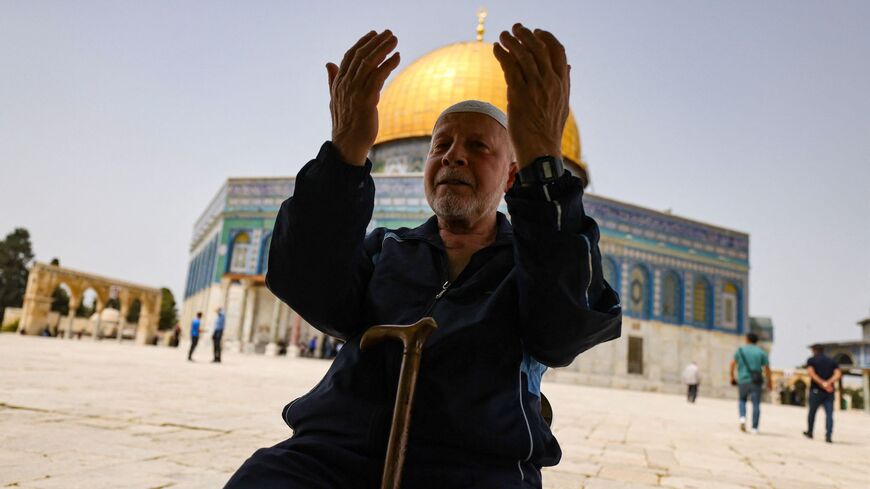 A Palestinian man prays in front of the Dome of Rock mosque at the Al-Aqsa mosque compound in Jerusalem's Old City on April 17, 2022. - AHMAD GHARABLI/AFP via Getty Images

Jerusalem reacted angrily April 19, after Jordanian Prime Minister Bisher al-Khasawneh hailed Palestinian rioters in the Temple Mount compound. The riots broke out early Friday morning, with Palestinians hurling stones at the Western Wall Plaza below and barricading themselves in a building on the site. Police detained several hundred people, and at least 152 Palestinians were injured in clashes with the police.

Later in the day, Israel reopened the site, and the Friday Ramadan service was conducted peacefully.

Addressing a session of the Jordanian parliament, Khasawneh  said “I salute every Palestinian, and all the employees of the Jordanian Islamic Waqf, who proudly stand like minarets, hurling their stones in a volley of clay at the Zionist sympathizers defiling the Al-Aqsa Mosque under the protection of the Israeli occupation government.” Also addressing the parliament, Jordanian Foreign Minister Ayman Safadi said yesterday that Amman’s position regarding the Al-Aqsa Mosque and its protection remained the same.

The Jordanian Foreign Ministry summoned Israel’s ambassador for a reprimand yesterday over Israeli actions on the Temple Mount. Since Ambassador Eitan Surkis was out of the country, his deputy Sami Abu Janeb went to the meeting.

Already on Sunday, Jordanian King Abdullah II urged Israel to "cease illegal provocative measures" on the Temple Mount. A statement issued by the palace in Amman said, "His Majesty King Abdullah II stresses the need for Israel to respect the historical and legal status quo" at the Al-Aqsa Mosque compound. The king "directs the government to continue regional and international efforts to stop Israeli escalation and lobby for an international position that exerts pressure on Israel."

Prime Minister Naftali Bennett said he viewed Khasawneh's comment “with utmost severity,” and expressed his dismay over “backing those who … resort to violence.” Without naming Jordan or Khasawneh explicitly, Bennett criticized “the remarks accusing Israel of the violence directed against us,” lashing out at “those who are encouraging rock-throwing and the use of violence against the citizens of the State of Israel.”

Justice Minister Gideon Saar tweeted yesterday, “Statements made by senior officials in the Kingdom of Jordan are grave and unacceptable. The sovereignty of Israel in Jerusalem as its capital is the guarantee of freedom of worship for members of all religions in the city. The attempts of extremist and terrorist elements, such as Hamas, to ignite the territory through a false anti-Israel campaign are transparent and should be condemned.”

Foreign Minister Yair Lapid tweeted today that he has issued instructions "to continue with dialogue at all diplomatic levels to de-escalate the tensions and emphasize Israel’s efforts to allow freedom of worship for all religions.” Lapid also announced he was cutting short his vacation in Madrid because of the diplomatic and security crisis.

Bilateral relations between Israel and Jordan have improved significantly under the Bennett-Lapid government. Israeli leaders, including Bennett, Defense Minister Benny Gantz and President Isaac Herzog, had all traveled to Amman and met with the king in recent weeks, mending the ties broken under the Netanyahu government.

Other regional diplomatic efforts are also ongoing. On Sunday, Turkish President Recep Tayyip Erdogan spoke with Palestinian President Mahmoud Abbas and condemned Israel’s “intervention against worshipers at Al-Aqsa Mosque” and its “provocations.” Today, the Turkish leader spoke on the phone with his Israeli counterpart Isaac Herzog. According to a statement issued by the office of Israel’s president, Herzog told Erdogan about Israel’s efforts to protect freedom of worship for all religions, including Muslims. “President Herzog added that we must not listen to the voices of incitement and mendacious propaganda, and that the public is looking up to the region’s leaders and expects us all to act responsibly and work for calm in these holy days for all religions in the region,” read the statement.

Secretary of State Antony Blinken spoke this afternoon on the phone with Lapid and with Abbas. In their conversation, Lapid reportedly told Blinken that Israel will not accept support for Palestinian violence on Temple Mount. He also called for the international community to support Israeli attempts to restore peace on the site.