Blaming Israeli radicals and security forces for the attacks against the Palestinians, Erdogan expressed concern over the spreading of unrest to Gaza. 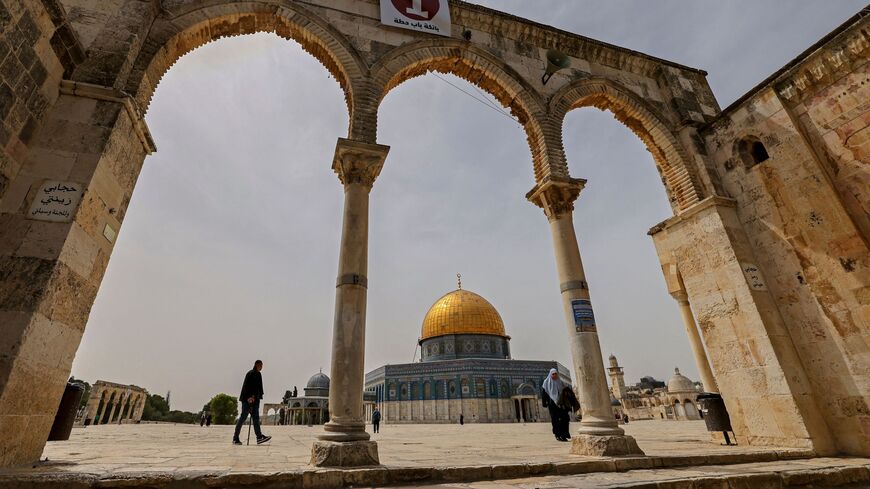 The two leaders discussed regional issues and bilateral relations, “particularly the events caused by some Israeli radical groups and security forces in recent days,” Erdogan said in a series of tweets.

Erdogan reportedly told Herzog that since the beginning of Ramadan, more than 400 Palestinians have been injured and 18 people, including children, lost their lives in the events that took place in the West Bank and at Al-Aqsa Mosque. Erdogan added that he was concerned that the events will spread to the Gaza Strip.

Blaming “radicals” for the attacks, the Turkish president said that measures must be taken to protect the sanctity and security of the mosque. “The violent events that happen every year cause rightful reactions in the Islamic world,” he added.

Herzog was quoted as telling Erdogan that Israel is protecting freedom of worship and the efforts by Israel's security forces are ensuring that freedom. Herzog told Erdogan that incitement and propaganda should be ignored, while violence — especially toward Jews walking to prayer — should be condemned.

Israel carried out its first airstrike on the Gaza Strip in months early Tuesday in response to a rocket fired from the Palestinian enclave after a weekend of violence around a Jerusalem holy site. On Friday, at least 152 Palestinians were wounded in clashes with Israeli riot police inside the Al-Aqsa Mosque compound, the latest outbreak in an upsurge of violence that has raised fears of a slide into wider conflict.

The phone call took place amid an air of rapprochement between Tel Aviv and Ankara. Foreign Minister Mevlut Cavusoglu said that he would visit Israel and Palestine one after the other — a traditional practice in Turkish diplomacy —  in the third week of May.

In a live interview with NTV April 14, Cavusoglu refuted earlier claims that he would visit Israel with Defense Minister Hulusi Akar. “The president, while receiving  Herzog, said that we would go to Israel with Energy Minister Fatih Donmez. So I do not see why there is further speculation,” he said.

Possible clashes in Haram al-Sharif, the third holiest site in Islam, came up during Herzog’s visit to Ankara last month. Erdogan had also told his Israeli counterpart that Ankara expects Israeli authorities to be sensitive during the Muslim holy month of Ramadan and stressed the importance of allowing Palestinians to enter Israel. April marks the three significant festivals Abrahamic faiths observe: Jewish Passover, Christian Easter and the Muslim fasting month of Ramadan. “Good as it sounds, this always spells trouble,” said one Turkish diplomat, explaining that how Ankara and particularly Erdogan react could become a litmus test in the budding Turkish-Israeli relations.

Erdogan’s initial remarks on the clashes were more moderate than those in previous years. On Sunday, Erdogan called his Palestinian counterpart Mahmoud Abbas to tell him that he strongly condemned Israeli "intervention on worshippers.”

His use of the word “intervention” marked a sharp contrast to the Turkish president’s earlier strong condemnation of  Israel's “heinous attacks” in English, Arabic, Turkish and Hebrew.

Erdogan said that he thanked Abbas for his “restraint and prudent leadership” and assured him that Turkey was always on the side of Palestine. “The events remind us of the necessity for all Palestinian groups to work toward unity and reconciliation,” Erdogan tweeted.

The Turkish president’s telephone diplomacy continued Monday with Jordan’s King Abdullah II. Erdogan expressed concern about the incidents unfolding in Palestine over Israel's “interventions and provocations” and urged close cooperation between Turkey and Jordan on steps for regional peace.

The Hashemite monarchy has held the custodianship of Al-Aqsa and the Dome of the Rock in Jerusalem for nearly a century. In 1924, the Supreme Muslim Council recognized Hussein bin Ali Al-Hashimi, great-great-grandfather of Abdullah II, as custodian of Jerusalem’s Christian and Moslem holy sites.

As the deal predates Israel and the Palestinian Authority, both signed agreements in the last quarter-century recognizing Jordan’s custody. The Hashemite dynasty also pays for the upkeep of the sites. In 2016, Abdullah partly funded the renovation of Christ's tomb in the Church of the Holy Sepulchre. In 2017, he donated $1.4 million to the Jerusalem Islamic Waqf, the Jordanian authority responsible for administering Al-Aqsa.

Both Abdullah and Erdogan spoke to UN Secretary-General Antonio Guterres on Al-Aqsa.

Erdogan reportedly told Gutteres that Turkey condemned Israel's actions, while Abdullah accused Israel of provocative acts in the mosque compound that violated "the legal and historic status quo" of the Muslim holy shrines. The UN head reportedly "reaffirmed his position that the status quo at the holy sites in Jerusalem must be upheld and respected" and "any provocation" "must be avoided at all costs." The UN Security Council has convened an emergency session today to discuss the latest outbreak of violence.

Erdogan also tied the unfolding of events in Jerusalem to various attacks against Muslim places of worship in Europe. “Anti-Muslim and xenophobic groups should not be allowed to use their freedom of expression and assembly to insult and attack Muslims' beliefs, sanctities and places of worship,” he said.

Erdogan’s words come after three days of clashes in Sweden over a far-right and anti-Muslim politician urging his supporters to burn a copy of the Quran. Many countries in the Middle East condemned his plans. Iraq summoned the top Swedish diplomat in Baghdad to protest the issue and the governments of Jordan and Qatar denounced the plans.

The Turkish Foreign Ministry also joined in. "We condemn, in the strongest way possible, attacks and provocations against Muslims, Islam, the Quran and places of worship in different parts of the world during the holy month of Ramadan," read its statement.

Cavusoglu said the Al-Aqsa outburst and the Quran burning in Sweden were two faces of anti-Muslim attacks as part of a series of events that target Muslims in the holy month of Ramadan. Speaking alongside his Hungarian counterpart Peter Szijjarto on April 19,  Cavusoglu claimed that sacred Muslim places or beliefs had been attacked almost every day since Ramadan began.

“A Neo-Nazi politician burned the Quran while being protected by the Swedish police last week. This is unacceptable but hardly unique. On April 15,  a Turkish citizen in New York was the target of an anti-Muslim attack,” he said. “On April 16, in the German city of Dortmund, threatening letters, accompanied by the photo of a pig, were sent to a Turkish mosque. The next day, in Canada, shots were fired at a Muslim group leaving a mosque. In Virginia, US, anti-Turkish slogans were scribbled on the wall of a mosque … and you all know what happened in Al-Aqsa Mosque,” he said. “I do not think that the escalation of events in Ramadan is a coincidence. This is the work of the ultra-right Nazi groups who are losing at the ballot box. We stand against both anti-Muslim and anti-Semitic attacks, as we consider them both crimes against humanity.”