A far-right politician had planned to burn a copy of the Quran but called it off as Muslim citizens rioted. 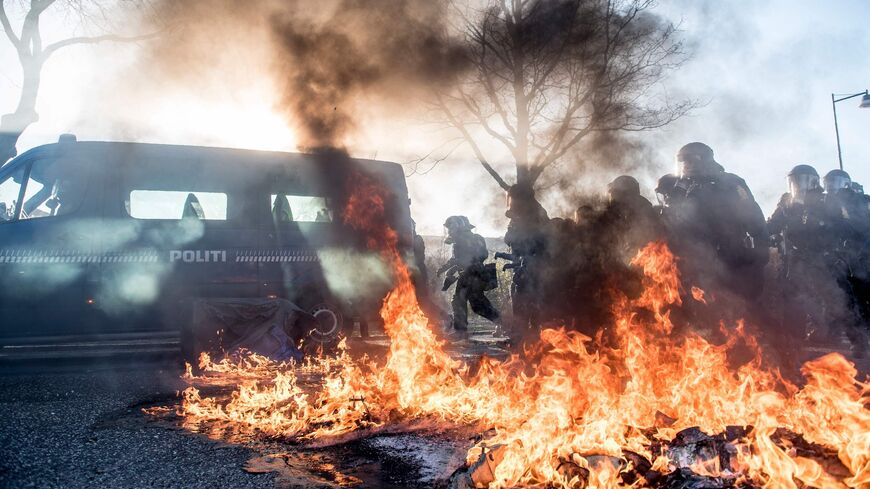 Riot Police pass a fire burning at the side of the road after stopping a demonstration in the Albertslund area planned by Rasmus Paludan, leader of the far-right Stram Kurs (Hard Line) party on April 15, 2019. - MADS CLAUS RASMUSSEN/AFP via Getty Images

Several Middle Eastern governments and politicians have spoken out against plans by a far-right politician in Sweden to burn a copy of the Quran.

The controversy began with plans by the Swedish-Danish politician Rasmus Paludan to hold a rally yesterday in the Swedish city Norrkoping. Paludan, who leads the far-right and anti-Muslim immigration party Hard Line, reportedly planned to burn a copy of the Quran at the event. Paludan has burned the Islamic holy book in the past.

Violent riots broke out in several areas of Sweden over the plan. Rioters clashed with police leading to dozens of arrests. Paludan ended up canceling the rally, saying police could not protect him.

Sweden has a large Muslim community that makes up around 8% of the population. Many came from Iraq, Syria and Afghanistan in 2016 at the height of the refugee crisis. The growth of Sweden’s Muslim community has fueled populist right-wing political parties in the Scandinavian country.

Many Middle Eastern governments denounced Paludan's plans to burn the Quran. The Saudi Foreign Ministry condemned the “deliberate abuse of the Holy Quran” in a statement today.

Yesterday, Iraq summoned the top Swedish diplomat in Baghdad to protest the issue, following calls a day earlier by prominent Iraqi Shiite cleric Muqtada al-Sadr to do so. Iran also summoned Sweden’s charge d’affaires in Tehran yesterday, and the governments of Jordan and Qatar denounced the plans the same day.

The Turkish Foreign Ministry also condemned the burning in a statement Monday. "We condemn, in the strongest way possible, attacks and provocations against the Muslims, to Islam, to the Quran and to places of worship in different parts of the world during the holy month of Ramadan," the statement said.

"The recent attacks against the holy book of Islam in Sweden show that no lessons have been taken from the past," the statement added, accusing European countries of failing to take adequate measures against "provocations toward Muslims" and of turning a blind eye toward hate speech under the guise of freedom of expression.

The Swedish government has not apologized for Paludan’s activities.

“In Sweden people are allowed to express their opinions, whether in good or bad taste; it's part of our democracy. No matter what you think, you should never resort to violence. We don't and will never accept it,” Prime Minister Magdalena Andersson told reporters April 16.

This is not the first time European and Middle Eastern politicians have been caught up in issues pertaining to Islam and freedom of expression. In 2020, Turkish President Recep Tayyip Erdogan and French President Emmanuel Macron had a public spat over a French teacher who was beheaded after showing an image of the Prophet Muhammad in class. Images of the prophet are considered offensive by many Muslims.