With all the efforts invested by the Bennett government to rehabilitate ties with Jordan, Jerusalem was surprised over the tone deployed by Amman over the Temple Mount clashes. 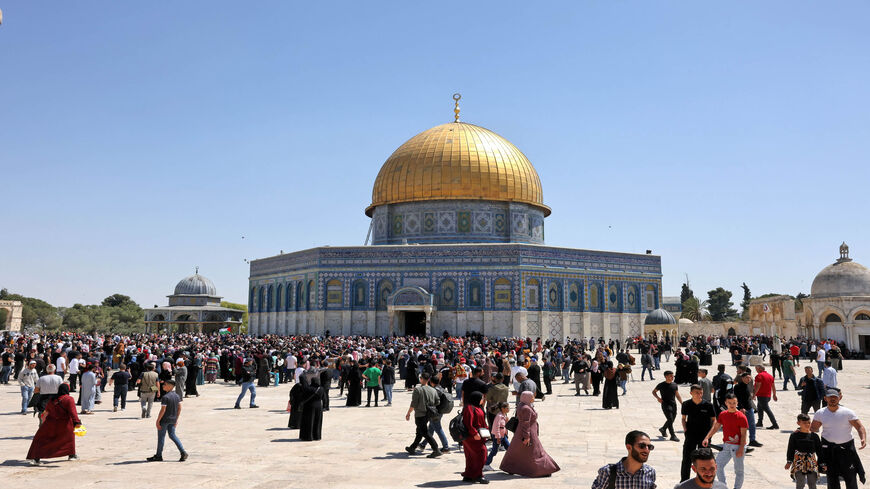 After several frustrating days on the diplomatic front, Prime Minister Naftali Bennett turned to social media to post a clip from an interview he gave to CNN's chief international correspondent Christiane Amanpour. “The interviewer from CNN asked me why we sent troops to use violence against Muslim worshippers on the Temple Mount. Watch my answer. I will continue to fight against the lies about Israel,” Bennett tweeted.

In the video clip attached to the tweet, Bennett sounded particularly antagonistic. In a tense exchange, he chastised Amanpour, saying, “There you go again, starting the story in the middle, but the actual fact is that last Friday, at about 5 a.m. in the morning, roughly 300 Palestinian rioters entered the Temple Mount mosque with explosives, with stones. They began desecrating their own mosque, burning, throwing stones and preventing about 80,000 decent Muslims from going to pray. My responsibility as prime minister of Israel is to provide freedom of prayer to everyone in Jerusalem, including Muslims, which is why I had to send in policemen to remove the rioters. And it worked. Indeed, 80,000 Muslims went on later to pray peacefully. So, you know, when faced with violence, you have to act tough.”

This interview was apparently intended for an Israeli audience, not just international consumption. Its purpose was to prove to Israelis that they have a prime minister from a right-wing party who does not show weakness when faced with clashes on the Temple Mount and Palestinian aggression.

Over the last few days, Israel’s government has come under harsh diplomatic fire, including from its friends. The sharpest criticism came from Jordan.

Jerusalem was shocked by the remarks of Jordanian Prime Minister Bisher al-Khasawneh, while addressing parliament April 18. Referencing the violence surrounding Al-Aqsa Mosque, he said, “I salute every Palestinian and all the employees of the Jordanian Islamic Waqf, who proudly stand like minarets, hurling their stones in a volley of clay at the Zionist sympathizers defiling Al-Aqsa Mosque under the protection of the Israeli occupation government.” He then went on to accuse the Israeli government of attempting to partition the mosque, based on criteria of time and place. Jordan prevented this, he said, arguing this was a violation of international law.

The palace was singing a similar song. It released a statement on Twitter that King Abdullah II had a conversation with Egyptian President Abdel Fattah al-Sisi, in which he urged Israel to "cease illegal provocative measures" on the Temple Mount. Israel’s Deputy Ambassador to Jordan Sami Abu Janeb was then summoned to the Jordanian Foreign Ministry for a reprimand.

The United Arab Emirates (UAE) had a similar response. Israeli Ambassador Amir Hayek was summoned for a clarification of the incident and for the UAE authorities to condemn the events on the Temple Mount to him. UAE Minister of State for International Cooperation Reem Al Hashimy told Hayek that the escalation of violence must be stopped immediately. Muslim worshippers must be given full protection, she said, and Israel must desist from any actions that would desecrate the sanctity of Al-Aqsa Mosque. The UAE also joined other nations in an initiative to hold a closed-door meeting about the Temple Mount in the United Nations Security Council, without Israeli or Palestinian representatives.

Abu Dhabi’s Wizz Air also gave Israel the cold shoulder by canceling its participation in a flyby to mark Israel’s Independence Day. The announcement was made at the same time that the Israeli ambassador to Abu Dhabi was summoned to the nation’s Foreign Ministry for a reprimand.

All of this is happening after several months in which the Israeli prime minister has been reveling in how he relations with Abdullah have improved considerably, while relations with the UAE have grown warmer.

The Israeli right was quick to attack. They called the recent developments the direct result of a policy of weakness and obsequiousness. They brought up past meetings between Bennett, Foreign Minister Yair Lapid and Defense Minister Benny Gantz with the king in his palace. At these meetings, the Israeli leaders praised the monarch for his warm relationship with Israel, and made a series of diplomatic gestures, including an increase in Israel’s water quotas to Jordan.

These all came under attack from the right, as did efforts to coordinate with Jordan over policies to achieve calm during the holy month of Ramadan. They also condemned a visit to Jordan by Minister of Internal Security Omer Bar Lev for a meeting with Jordanian Foreign Minister Ayman al-Safadi to coordinate measures on the Temple Mount to maintain calm during Ramadan.

The fact that Jordan and the UAE unilaterally adopted the Palestinian narrative advanced by Hamas seems to be a diplomatic and public relations failure for Israel. Furthermore, Israel took a number of measures to avoid an escalation, including a decision not to impose a closure of the West Bank during the Passover holiday, despite alerts about potential terrorist attacks.

Just on the evening of April 20, Bennett made the extraordinary move of banning Knesset member Itamar Ben Gvir, head of the far-right Otzma Yehudit (Jewish Power) faction, from participating in a march to the Jerusalem flashpoint Damascus Gate. This decision was based on briefings from the security forces, which said that his participation could result in a widespread outbreak of violence and drag Hamas into the campaign.

Despite the banning, a rocket from the Gaza Strip was fired at the southern Israeli town of Sderot last night. Israel's air force responded with an attack on military targets in Gaza.

This morning, head of the Hamas political bureau Ismail Haniyeh responded by challenging Israel’s leadership. If you think that the violence at Al-Aqsa will change the Muslim character of the mosque, you are living in a dream world, he said.

It now looks as if Bennett and Lapid have spent the last two days trying to reduce the damage from this diplomatic failure. Lapid spoke with his Emirati counterpart, Foreign Minister Sheikh Abdullah bin Zayed Al Nahyan, and tweeted about it this morning. He wrote that his colleague expressed his appreciation “for the steps Israel has taken to calm the situation and his understanding of the complexities and difficulties Israel faces.”

This afternoon, Lapid met with a senior US delegation, which included senior State Department official Yael Lempert. Lapid tweeted after the meeting, "We discussed Israel’s efforts in this very challenging period to preserve the status quo on the Temple Mount, and I expressed my appreciation to the United States for its efforts to calm tensions in the region."

These are the first steps by the Israeli government to manage the tense situation at this time. The question is whether it is too late. Video clips have been making the rounds on social media over the last few days, along with false claims that Israel is seizing control of Al-Aqsa Mosque. Yet Israel has failed to defend its own position on the matter or highlight Palestinian provocations, including attacks on Jewish worshippers in Jerusalem.