Israeli coalition on verge of collapse as Jerusalem roils

The tensions at Jerusalem’s holy sites is tearing apart what little is left of the Israeli coalition government. 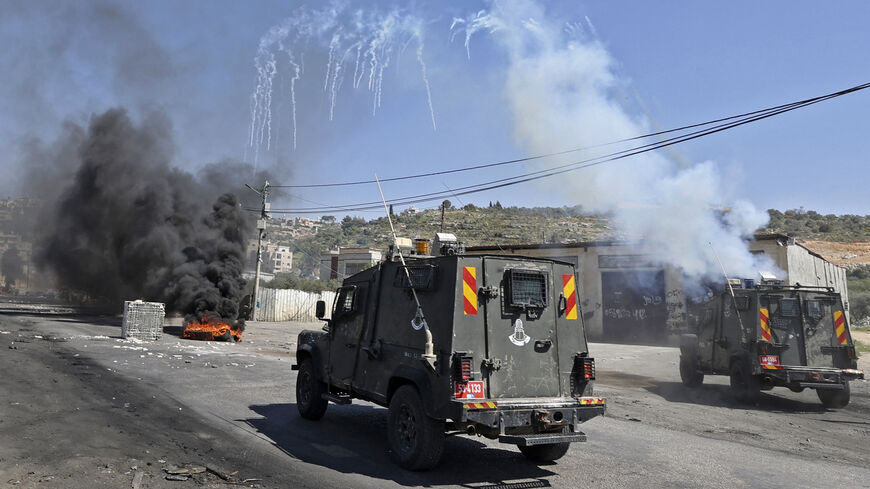 Israeli security members fire tear gas from vehicles amid clashes with Palestinian protesters during a demonstration against Jewish settlements and in support of Jerusalem's Al-Aqsa Mosque in the village of Beita in the occupied West Bank, on April 15, 2022. - JAAFAR ASHTIYEH/AFP via Getty Images

The compound that Jews call the Temple Mount and Muslims call Haram al-Sharif, holy to both religions, is a perennial flashpoint, a powder keg that can always be counted on.

In recent weeks, Israel’s allies in the region have repeatedly urged Israel to ensure calm at the site ahead of the converging Muslim, Jewish and Christian religious observances of Ramadan, Passover and Easter. Any suggestion of real or perceived Israeli aggression toward Muslim worshipers, they warned, would be dangerous.

But even as authorities were making efforts to ease the tensions, radicals on both sides fanned the flames. The clashes that erupted last week at Al-Aqsa Mosque between Israeli police and Muslim worshipers have sparked widespread criticism of Israel in the Arab world.

The violence is also tearing apart what little is left of the Israeli coalition government. Ra’am, which represents the Islamic movement in Israel and is the only Arab party ever to join a ruling coalition, announced on April 18 that it was suspending its parliamentary activity and its four lawmakers would not participate in Knesset debates and votes. Two of the four have declared their intention to withdraw from the coalition, an act that would result in the government’s collapse.

The government of Prime Minister Naftali Bennett and Foreign Minister Yair Lapid, never robust to begin with, has been on a downward slide since the April 6 walkout of the coalition whip, Knesset member Idit Silman, who left it with 60 seats in the 120-member legislature. A Ra’am walkout would end its prospects for survival.

Despite last week’s clash, this year’s Ramadan observances in Jerusalem have been calmer compared to last year, when Gaza radicals fired rockets at Jerusalem for the first time ever and set off fighting between Israel and Hamas and Islamic Jihad that engulfed mixed Arab-Jewish towns within Israel. Nevertheless, the current heightened tensions are prompting frenzied activity on all sides. In Jordan, the custodian of Jerusalem’s Muslim holy sites, Prime Minister Bisher al-Khasawnehal took to the podium in parliament, praising the Palestinians “who proudly stand like minarets, hurling their stones in a volley of clay at the Zionist sympathizers defiling Al-Aqsa Mosque under the protection of the Israeli occupation government.”

There has been significant improvement in ties between the Bennett-Lapid government and the Hashemite Kingdom reflected in the recent visits of President Isaac Herzog and Defense Minister Benny Gantz to the palace in Amman. Israeli officials understand that the anti-Israel invective is designed to appease the public and express the anger of Palestinians who make up a majority of the Jordanian population.

The April 15 clash at the venerated compound began when a few hundred young Palestinians barricaded themselves in the mosque overnight prior to Friday prayers. They amassed piles of iron bars and stones to pelt Jewish worshipers at the Western Wall Plaza below the mosque compound.

While the entry of Israeli forces into the mosque is a known trigger for Muslims, exacerbated by rumors about Israel’s plans to take over the site, Israeli police did not appear to have much choice but to break in and detain the rioters. While the event has been contained, it has rocked the fragile government and may be the final blow that puts the coalition out of its misery.

The border with Gaza had been calm for over four months until the evening hours of April 18, when a single rocket fired from the enclave at Israel was intercepted by the Iron Dome air defense system, prompting a retaliatory strike by Israel on Gaza targets. The IDF said April 19, “Fighter planes attacked a number of targets and destroyed a Hamas weapons production facility. Israel regards Hamas as responsible for all events in and from the Strip.”

Israeli officials say Hamas, incentivized by the Israeli and Egyptian relaxation of restrictions on Gaza, has not only held itself back but prevented the smaller Islamic Jihad and other organizations from resuming attacks on Israel. “This is not a convenient time for Hamas to set fire to the Temple Mount or Judea and Samaria and spark a rebellion among Israeli Arabs,” a senior Israeli military source told Al-Monitor on condition of anonymity. “They are getting many economic benefits. The economic situation in Gaza is improving; residents are being allowed to work in Israel, keeping much of the population with its head above water. They do not want to lose all of this.”

Nevertheless, once violence erupts in this region, everyone tends to join in. Few can afford to remain on the sidelines, even within the Israeli political arena. A Twitter battle eruped between Bennett and opposition head Benjamin Netanyahu this morning.

An Israeli crackdown on suspected radicals appears to have stemmed the tide of the Muslim terrorist attacks that rattled the country for three weeks starting March 22 and had kept the Gaza front relatively calm until the Temple Mount clash. The coming days will be a test for all sides.

If calm is restored, Ra’am may be sufficiently pacified to remain in the coalition. But the Israeli calendar offers other opportunities for violence in the coming weeks, with Israel’s Independence Day (May 4-5). There is also the annual Dance of the Flags march by Jewish nationalists celebrating the reunification of Jerusalem (May 29), which triggered the war with Gaza last year. Then the Muslim Eid al-Adha (Feast of the Sacrifice) comes in early July. Good luck to us all.