Israel lifts restrictions on Gazans ahead of Ramadan

Israel fears an escalation in the West Bank and Jerusalem during Ramadan that will extend to the Gaza Strip. 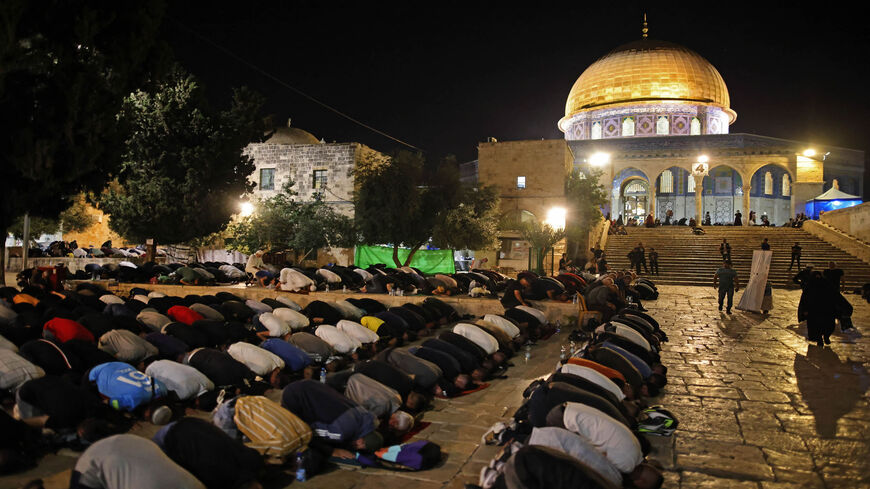 Palestinian devotees pray on Laylat al-Qadr outside the Dome of the Rock at Al-Aqsa Mosque compound during the Muslim holy month of Ramadan, East Jerusalem, May 8, 2021. - Ahmad Gharabli/AFP via Getty Images

Israel is seeking to prevent a recurrence of the war with Hamas and the Palestinian resistance factions in the Gaza Strip that broke out in May 2021, mainly due to the tensions that prevailed in Jerusalem during Ramadan last year. As part of these efforts, Israel announced that it will lift some restrictions imposed on the residents of Gaza to prevent any escalation during the Muslim holy month of Ramadan which starts at the beginning of April.

On March 27, the Israeli Coordinator of Government Activities in the Territories (COGAT), Maj. Gen. Rassan Alian, announced on his official Facebook page that the Israeli government had taken a decision ahead of Ramadan, for the first time since 2005, to approve the employment of up to 20,000 Gazans in the construction and agriculture fields inside Israel.

“The workers will receive fair wages as well as social rights that will guarantee their future. The decision was taken in light of the prevailing calm, so the people of Gaza better maintain calm,” he continued.

On the same day, the International Committee of the Red Cross in Israel and the occupied territories announced that it has been notified that Israel has allowed the resumption of the family visits program for the families of Gaza prisoners in Israeli prisons, as of March 29. These visits had been suspended in March 2020 due to the coronavirus pandemic.

On March 10, COGAT announced raising the number of permits for Gazan traders to 12,000, as well as approving a mechanism for bringing fishing equipment into the Gaza Strip, and for the first time in 10 years allowing car batteries from Gaza to be recycled in Israel, as well as expanding the export of metal scraps from Gaza and the introduction of X-ray machines and their spare parts.

On March 24, the head of Qatar's National Committee for the Reconstruction of Gaza, Mohammed al-Emadi, told the Palestinian Sawa news agency that the Qatari grant to Gaza had been renewed in the amount of $360 million. He noted that an agreement had been reached with the Israeli government six months ago to grant 30,000 permits for Gazans to work inside Israel and that the number of permits would gradually increase.

Yet despite these seemingly goodwill measures toward the Gaza Strip, the Israeli police and the National Security Council announced March 26 that no restrictions would be imposed on Israeli settlers entering the Al-Aqsa Mosque compound during the current period, claiming that tensions in Jerusalem are currently much lower than last year.

On the same day, Al-Aqsa Mosque preacher Sheikh Ekrima Sabri warned in press statements that Israel would be to blame for any security tension in light of its decision to allow settlers to enter Al-Aqsa Mosque during Ramadan.

Meanwhile, the Israeli government of Naftali Bennett is trying to calm the situation in Jerusalem ahead of Ramadan. On March 1, the Israeli Supreme Court approved a decision to cancel the eviction of four Palestinian families in the Sheikh Jarrah neighborhood of East Jerusalem. And on Feb. 20, Bennett’s government announced that it would not set up checkpoints in the Bab al-Amud area (Damascus Gate) during Ramadan.

But despite all this, the biggest and most important dilemma in this equation remains Al-Aqsa Mosque.

Yahya Moussa, Hamas representative at the Palestinian Legislative Council, told Al-Monitor that Israel "is trying to buy security and calm with Gaza in exchange for these simple concessions for Gazans because Israel knows that increasing economic pressure on the enclave’s residents will lead to an escalation.”

He said, “Hamas and the resistance factions do not initiate an escalation toward Israel, even though the Palestinians have the right to resist the Israeli occupation by all means according to international law. So the battle is open with Israel until the territories occupied in 1948 are free from the occupation.”

Islamic Jihad leader Ahmed al-Mudallal told Al-Monitor, “Israel has not lifted the siege it has been imposing on Gaza since Hamas took control of the enclave in June 2007. The restrictions Israel claims to lift fall within the framework of the so-called economic peace. But the resistance will not be silenced and will respond if the holy sites in Jerusalem are violated, especially if the settlers storm Al-Aqsa during Ramadan.”

He said, “The ‘Sword of Jerusalem’ battle in May 2021 between the resistance factions and Israel is just a round of conflict with the Israeli occupation. The war is ongoing and will keep going as long as Israel is still occupying the Palestinian territories.”

Meanwhile, Wissam Afifi, a political writer close to Hamas, told Al-Monitor that Hamas believes these Israeli measures "will not lead to a fundamental change in the Gazans’ living conditions." He added, "Such concessions aim to manage the humanitarian and economic crisis in Gaza, as the unemployment rate reached 48% in 2021. These are not solutions to the humanitarian and economic crises. They only seek to prevent any possible escalation during Ramadan, because the situation could implode since the Jewish Passover holiday is also coinciding with the third week of Ramadan.”

Hassan Abdo, writer and political analyst close to Islamic Jihad, told Al-Monitor, “Israel fears instability in the West Bank and occupied Jerusalem, due to Passover coinciding with Ramadan, which prompted the Israeli government to act.”

He added, “It lifted some restrictions to prevent any escalation during Ramadan, as well as it resorted to certain Arab countries such as Egypt to pressure Hamas into maintaining calm. The COGAT visited Cairo March 27 and met with security officials for this purpose.”

Abdo expects violent confrontations between Palestinians and settlers should Israeli extremist religious groups storm Al-Aqsa Mosque and carry out their threats to perform rituals and prayers inside the mosque compound on Passover.

Talal Okal, a political analyst and writer for the Palestinian Al-Ayyam newspaper, told Al-Monitor, “Israel has expressed concerns about major escalation during Ramadan. Amid these internationally shifting circumstances in light of Russia's war on Ukraine, Israel does not want such an escalation. The concessions it had made for Gaza fall within the framework of economic peace, and Israel insists that economic peace be an alternative to the peace process with the Palestinians.”

He noted that Hamas has no intention of launching an attack from Gaza since the Palestinian resistance movements are also active in the West Bank. “Hamas and Islamic Jihad can respond and confront the Israeli threats in Jerusalem through their members there, and not necessarily with missiles from Gaza. The cost of carrying out an escalation from Gaza is extremely high in light of the faltering reconstruction process due to the lack of serious international action to rebuild Gaza.”