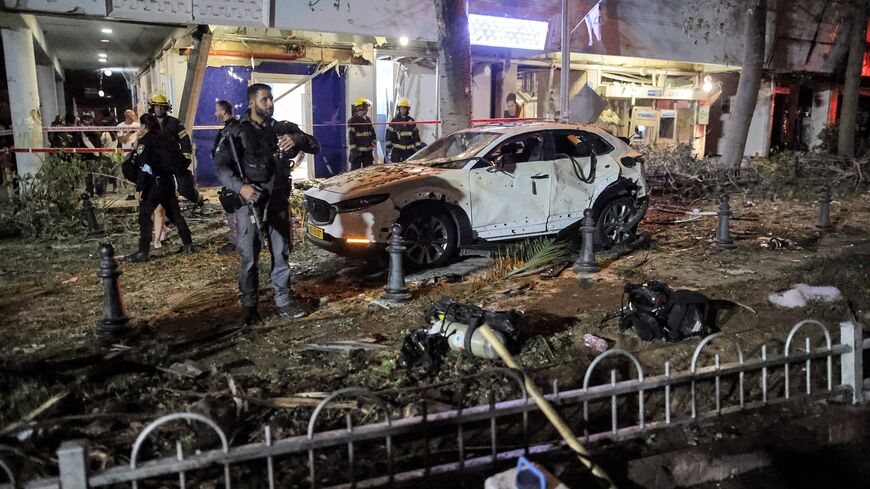 Israeli security and civil defense forces stand by a damaged vehicle in Holon south of Tel Aviv on May 11, 2021, after rockets were launched into Israel from the Gaza Strip. - AHMAD GHARABLI/AFP via Getty Images

GAZA CITY, Gaza Strip — Hamas and other "resistance" factions in the Gaza Strip began firing rockets from Gaza toward Israeli communities and the city of Jerusalem on May 10.

Brigades spokesman Abu Obeida tweeted, “The Joint Chamber of Palestinian Resistance Factions in the Gaza Strip gave Israel until 6 p.m. on May 10 to withdraw its soldiers from Al-Aqsa Mosque and the Sheikh Jarrah neighborhood in Jerusalem, and release individuals detained in the recent events in Jerusalem.”

In response to the rocket attack, Israel threatened to launch an expanded response that could last for days. This follows nearly two years in which the situation between Gaza and Israel has been relatively calm in light of UN and Arab mediation efforts and  the coronavirus pandemic.

Daoud Shihab, a spokesman for the Islamic Jihad movement, told Al-Monitor, “The resistance factions will keep acting until all Israeli decisions related to the eviction of the homes [in Sheikh Jarrah neighborhood] are no longer implemented, all forms of attacks on Jerusalemites come to a halt and Israeli settlers’ incursions into Al-Aqsa Mosque come to an end.”

“The current round of escalation started when Israel began to oppress and prevent the Jerusalemites from praying at Al-Aqsa Mosque amid wide disregard for the Arab and Islamic stance,” he added.

He further said, “The resistance’s response came from Gaza after repeated warnings that fell on deaf ears. Therefore, in response to the appeals launched by the Jerusalemites and to which the international community paid no heed, the resistance factions had to respond and intervene to stop the attacks in Jerusalem and protect the Jerusalemites.”

A press release from Hamas spokesman Fawzi Barhoum reads, “What is happening in Jerusalem is crossing all red lines, and we will not hesitate for a moment to protect it and defend it no matter the price.”

The Palestinian factions are all taking part in the military response that began May 10. The first to escalate was the military wing of the Islamic Jihad movement, Al-Quds Brigades. It issued a statement claiming responsibility for targeting an Israeli military vehicle with an anti-tank missile (Kornet) on the border between the Gaza Strip and Israel and posted a video of the attack a few hours later.

The Al-Quds Brigades’ statement was followed by a series of rockets launched from Gaza on May 10 and 11; the Israeli Iron Dome system tried to intercept them. The Israeli authorities deployed the system at the borders in anticipation of the current escalation.

Since the beginning of the Muslim holy month of Ramadan on April 13, the city of Jerusalem has been witnessing clashes between Israeli police and settlers on the one hand and Palestinians on the other in the Bab al-Amud area, the Sheikh Jarrah neighborhood and the vicinity of Al-Aqsa Mosque. Hundreds of Palestinians have been injured in the clashes.

The rockets fired from Gaza led to the evacuation of the Israeli Knesset (parliament) and a decision to reroute a parade that is part of Israel's May 9-10 celebration of Jerusalem Day (marking Israel's takeover of the city of Jerusalem in 1967), amid sirens blaring and people fleeing to shelters in Israeli cities surrounding the Gaza Strip.

The Israeli army responded by bombing the Gaza Strip, which resulted in the killing of more than 20 people, including children, according to the Health Ministry in Gaza.

The Israeli army said 15 "Hamas and Islamic Jihad operatives" were killed in the Israeli air raids in Gaza.

The Palestinian factions started issuing threats about two weeks ago that they would respond to the developments in Jerusalem.

The escalation was also preceded by a May 8 announcement by the Higher National Commission for the Great March of Return and Breaking the Siege to reactivate night marches on the Gaza border and launch incendiary balloons toward Israeli communities. The marches had been suspended since December 2019.

The Joint Chamber of the Sons of Al-Zawari, a group created during the Gaza return March responsible for launching burning balloons from Gaza, named after the Tunisian engineer who contributed to designing Gaza drones, said in successive statements that it is carrying out operations in support of the people of Jerusalem and Al-Aqsa.

On May 9, Israel closed the crossing with the Gaza Strip until further notice, as per a statement by the Coordinator of Israeli Government Activities in the Territories, Ghassan Alian.

On the same day, Israeli authorities suspended a decision to allow the entry of businesspeople carrying BMC cards (trading permits) through the Beit Hanoun-Erez crossing toward Israel, the West Bank and Jerusalem until further notice. Just days earlier, Israel had decided to allow the passage of merchants from Gaza to Israel for the first time since the coronavirus outbreak in March 2020.

Talal Okal, a political analyst and writer at the Palestinian Al-Ayyam newspaper, said he does not expect the current round of escalation between Gaza and Israel to last longer than several days.

“[Israeli Prime Minister Benjamin] Netanyahu is facing a political crisis, and he is not expected to fight a war he expects to lose in Gaza,” Okal told Al-Monitor.

“The current round of escalation has brought the Gaza Strip back to the origin of the conflict with Israel, which has always tried to separate Gaza from the rest of the Palestinian territories and make it a separate entity at all levels,” Okal added.

He said, “The current round needs to be supported by other elements in order to mobilize Arab support that would prevent political leaders from normalization with Israel, as the current conflict is a struggle over Jerusalem, and it is a national, Arab and Islamic issue.”

On May 8, the Ministry of Endowments and Religious Affairs in Gaza called on Arab countries to sever their relations with Israel and halt the normalization process in response to what it described as Israel's attack on the occupied city of Jerusalem and its residents.