The Palestinian resistance factions in the Gaza Strip followed up on their pledge to attack Israel should it continue its violations against Palestinians in Jerusalem. 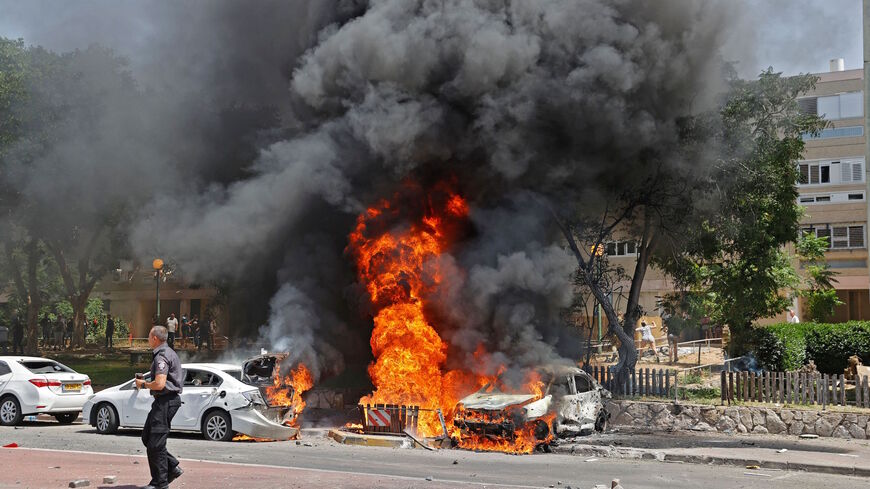 Vehicles burn after a rocket launched from the Gaza Strip, controlled by the Palestinian Hamas movement, landed in the southern Israeli city of Ashkelon on May 11, 2021. - JACK GUEZ/AFP via Getty Images

GAZA CITY, Gaza Strip — The Gaza Strip is witnessing the worst escalation of violence since the 2014 war as Israeli warplanes continue to conduct airstrikes across the enclave. The escalation came after Izz ad-Din al-Qassam Brigades, Hamas’ military wing, launched at exactly 6 p.m. May 10 a rocket attack toward Jerusalem. In a brief statement distributed to the press May 10, brigades' spokesman Abu Obeida said the rocket attack came in response to the “Israeli army’s crimes and aggression on the holy city and its violations against Sheikh Jarrah and Al-Aqsa Mosque.”

In an earlier statement the same day, the brigades had warned Israel against escalation, saying it had until 6 p.m. to withdraw its forces from Al-Aqsa Mosque and the Sheikh Jarrah neighborhood in Jerusalem, as well as releasing all prisoners.

Also May 10, the military wing of the Islamic Jihad movement, Al-Quds Brigades, fired an anti-tank missile (Kornet) at an Israeli military vehicle at the Gaza border.

As Palestinian resistance factions seemed to have kept their promises to respond to the Israeli actions in Jerusalem, the Israeli army responded with the biggest escalation round the Gaza Strip has witnessed in years. On May 11, the chief of staff of the Israel Defense Forces, Lt. Gen. Aviv Kochavi, said the military targeted more than 500 sites in the Gaza Strip, including weapons production sites.

It was the first time the brigades were reported to have launched locally made rockets toward Israeli cities.

Cross-border attacks were continuing May 12 as Arab and UN mediation failed to instill calm.

The Health Ministry in Gaza said at least 53 people, including 14 children and at least three women, were killed in the Israeli airstrikes in Gaza, while more than 296 others were injured.

On May 11, Ziad al-Nakhalah, the secretary-general of the Islamic Jihad movement, said in a brief statement that the movement is carrying on with the battle and will not back down.

On May 8, Nakhalah had said in a brief statement that it was impossible to stand idly by toward what is happening in Jerusalem, and threatened Israel with retaliation at any moment. On May 5, the Qassam Brigades issued a warning to Israel should it continue its violations in Sheikh Jarrah and Jerusalem.

Tensions have been high around the Al-Aqsa Mosque and also in the Sheikh Jarrah neighborhood in Jerusalem in recent days after Israeli forces threatened to forcibly remove Jerusalemite families from their homes built on lands claimed by Israeli settlers.

The official said the Islamic Jihad believes the Oslo Accords must be abolished because they only resulted in the Palestinian people making more concessions on their rights and losing land in the West Bank and Jerusalem. He said Palestinian internal affairs need to be reviewed as part of a strategy based on countering Israel and its crimes.

The official further said the Islamic Jihad’s threats to Israel affirm that the movement will not allow any attack in Jerusalem no matter the cost, adding that the group's leadership holds ongoing consultations to assess the situation in the city. He stressed that Nakhalah’s recent statement is an explicit indication that the Islamic Jihad has already opted for confrontation.

The source said the Islamic Jihad will use all available resources to support the Jerusalemites and the people of Sheikh Jarrah, although Israel continues to pursue the movement’s leaders and members and to forcibly drive them from Jerusalem. “The situation in Jerusalem is under our watch constantly, and we will not allow our people there to be singled out. We have a strong resistance capable of sanctioning Israel for its crimes,” he said.

Hamas spokesman Hazem Qassem told Al-Monitor that Hamas does not intend to engage in a war in the Gaza Strip. Yet such a blatant attack on a sacred Palestinian symbol that is Jerusalem cannot be disregarded, he added.

“Hamas took action at the popular, diplomatic and political levels. Hamas will not stand idly by toward the attacks that prevented Christian and Muslim Jerusalemites from performing their religious rites, which is a right guaranteed under all international norms and laws,” he warned.

Qassem pointed out that Hamas does not seek war, but is seeking to preserve its right to respond to the Israeli provocations against Palestinians. He stressed that the escalation will only stop once Israel ends its actions in Jerusalem, withdraws from Al-Aqsa and cancels its eviction plans in Sheikh Jarrah.

“Hamas does not intend to enter a long military confrontation. But if the Israeli violations continue, al-Qassam Brigades will certainly not stop responding and avenging the blood of martyrs and the violations of the sanctity of Al-Aqsa Mosque,” he added.

He said that after Israel ignored the warnings the resistance issued, the only option was to respond by launching missiles that can reach deep into Israeli. He warned that the resistance has many capabilities that it has yet to use.

“The resistance did not want to move the battle to Gaza in order to keep the focus on the Jerusalem events. But as Israel ignored the resistance’s threats, it had to respond,” he said.

Ibrahim Habib, a professor of political science at Ribat University College in Gaza, told Al-Monitor that the events in Jerusalem are an existential threat to the Palestinians and necessitate Palestinian unity on the ground. He said retaliation by the resistance in Gaza should be expected as it cannot remain silent toward Israel’s continued attacks in Jerusalem.

He said it is a rare occurrence for Israel to sidestep the US administration's push to calm the situation in the region. He saw a connection to the drawn-out negotiations to form an Israeli government following the March 23 elections; he said he thought the Israeli right is seeking to drag the region into a cycle of violence in order to force the rest of the parties to consent to a government of national unity.

Habib said he does not expect the military escalation in Gaza to last long, although he does not believe the resistance will abandon its demands to provide protection and security for the people in Jerusalem and Al-Aqsa Mosque. He stressed that the  confrontation broke out in support of Jerusalem and will not end until the goals are achieved.

Habib ruled out the possibility that the Palestinian Authority would respond to Nakhalah’s call for a united Palestinian position, especially in light of security coordination with Israel and the ongoing division within the Fatah movement. He said the decision to reform the PLO is not an independent Palestinian decision, but is rather based on regional, Arab and international considerations.