The planned eviction of Palestinian families from their lands in Jerusalem’s Sheikh Jarrah neighborhood, claimed by Israeli settlers, has shed light on the neighborhood and its history. 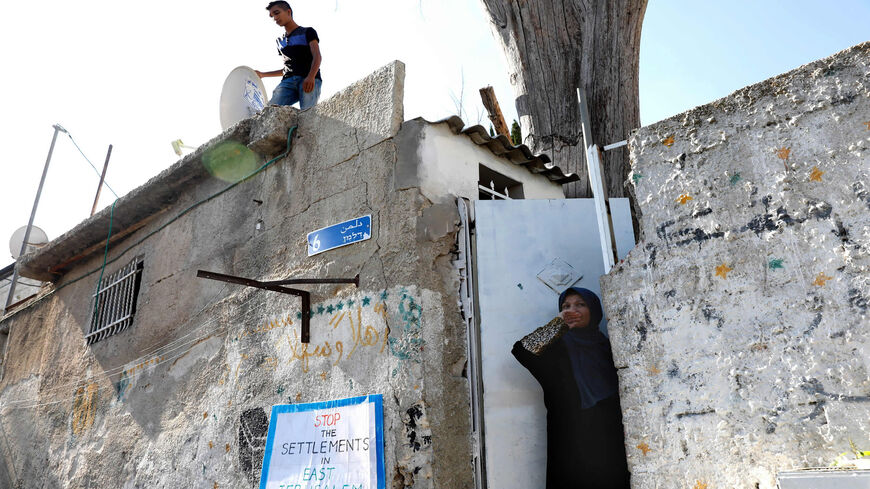 RAMALLAH, West Bank — Planned evictions in the Sheikh Jarrah neighborhood in East Jerusalem, as well as the Israeli attacks on Al-Aqsa Mosque compound and Muslim worshippers during the holy month of Ramadan, have been a detonator that triggered a confrontation in the Palestinian territories in the past weeks. The confrontation was quickly transported inside the Green Line (to cities within Israel), and escalated into a war on the Gaza Strip.

Sheikh Jarrah has now become a key to reaching a truce. The Palestinian armed factions have set as a condition that any cease-fire negotiations between them and Israel includes the Sheikh Jarrah neighborhood and Al-Aqsa Mosque dossiers.

On May 10, the conflict broke out in Gaza after Izz ad-Din al-Qassam Brigades, Hamas’ military wing, launched a rocket attack against the city of Jerusalem. The attack came in response to the repeated attacks by the Israeli Police against Jerusalemites at Al-Aqsa Mosque compound and in Sheikh Jarrah, which wounded hundreds of Palestinians.

A Hamas source who declined to be named told Al-Monitor that since the early hours of the battle, Hamas received calls from Arab, international and United Nations parties to push for a cease-fire in Gaza, and that it continues to receive such calls. He said that Hamas refused any cease-fire deal in exchange for a cessation of the Israeli aggression, and requires that Al-Aqsa and Sheikh Jarrah be included in any negotiations.

The source noted, “This confrontation erupted for the sake of Jerusalem, Al-Aqsa and Sheikh Jarrah, and the resistance retaliated to the Israeli aggression and attacks on Jerusalem. Thus, the confrontation cannot end without [ensuring an end of Israeli attacks against] Jerusalem."

Hamas is conditioning any cease-fire with Israel on the Jerusalem dossier, unlike in previous confrontation rounds, during which Hamas sought to break the siege on the Gaza Strip or responded to an Israeli aggression against it.

Head of Hamas’ political bureau Ismail Haniyeh said in a televised speech May 11, “A new balance of power started from the squares of Jerusalem and Al-Aqsa. Correlating Gaza with Jerusalem means that the resistance is correlated with the [Palestinian] identity.”

He noted, “It is no longer acceptable for us — as a people and a resistance — that the occupation singles out Al-Aqsa and Jerusalem, or abuses and violates them.”

Haniyeh continued, “What Gaza has done is a duty, and it does not sit right that Jerusalem be subjected to everything that we have seen without retaliation from our end.”

Hamas' focus on Jerusalem and Sheikh Jarrah comes at a time of declining popularity for Palestinian President Mahmoud Abbas, who recently postponed elections scheduled for May 22. While Abbas' declared reason for delaying the poll was a dispute over voting in East Jerusalem, many Palestinian observers saw it as a tactic meant to avoid expected gains by Hamas.

The Sheikh Jarrah neighborhood is located on the eastern side of the Old City of Jerusalem. The neighborhood was named after Hussam al-Din al-Jarrahi, an emir and personal physician of Saladdin. Jarrahi lived in Jerusalem and was buried there. A Sufi school was built above his tomb, and then a mosque in 1895, known as the Sheikh Jarrah Mosque. 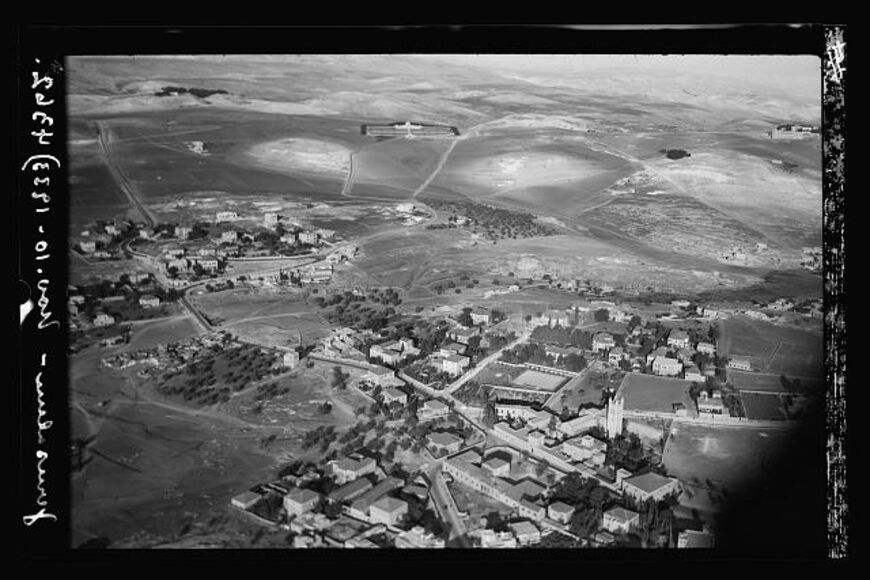 An aerial view of Jerusalem from 1931 shows the Sheikh Jarrah Quarter, close to the northern city limits. (Library of Congress)

In the mid-19th century, wealthy Palestinian families began to build residential neighborhoods outside the walls of the Old City of Jerusalem, including in Sheikh Jarrah, which soon turned into a neighborhood of residence for some Jerusalemite bourgeoisie. Many prominent wealthy Palestinian families such as Nashashibi, Husseini, Jarallah and Nusseibeh have houses there, Khalil Tafakji, director of the Mapping and Geographic Information Systems Department of the Arab Studies Society, told Al-Monitor.

The neighborhood is divided into two parts. There is the upper part that is one of the most vital areas in Jerusalem as it accommodates hotels, restaurants, and Arab, European and international consulates and institutions, in addition to palaces and old houses such as that of the Nashashibi family, and the headquarters of Dar al-Tifel al-Arabi Organization, which is a cultural landmark of Jerusalem.

Tafakji said that since its inception, the neighborhood has stood out for its architecture and its luxurious buildings that have drawn Arab and European consulates even before the 1967 war and the occupation of both Jerusalem and the West Bank. The neighborhood is home to the Lebanese, Saudi, Iraqi, Egyptian, Turkish, Spanish and Belgian consulates, in addition to the PLO headquarters, and some top restaurants, hotels and hospitals.

As for the lower part of the neighborhood, it has housed Palestinian refugees since the 1950s and lacks infrastructure. Its residents are in an open confrontation with the Israeli settlers and authorities. Currently, 28 families are faced with the risk of being displaced and evicted from their homes by the Israeli authorities to the advantage of the Nahalat Shimon settler organization, which seeks to set up a neighborhood for settlers under the pretext of having ownership of the land. 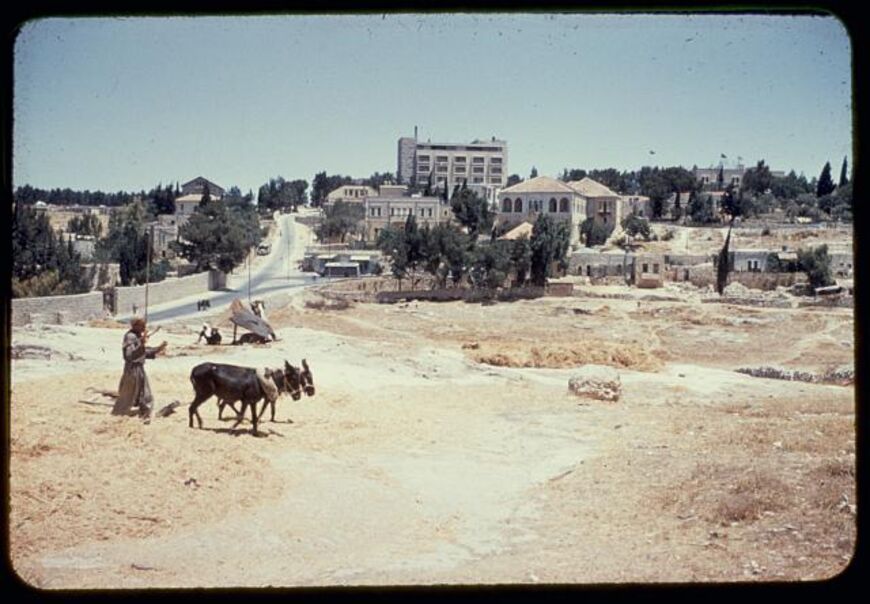 The families live in housing units built in the Karm al-Jaouni area of the neighborhood, as per an agreement between the Jordanian government and the UN Relief and Works Agency (UNRWA) in 1954, and another agreement in 1956. Under the agreements, the UNRWA finances the construction of housing units for these families, in exchange for relinquishing their rights as refugees, including the right to education, health care and other UNRWA services.

Although the war on the Gaza Strip continues, the focus continues to be made on Sheikh Jarrah where daily confrontations are taking place between the youths and Israeli Police, which are fully encircling the neighborhood. Tension is more likely to increase in the coming days, especially after a Palestinian youth rammed his car into an Israeli Police roadblock in the neighborhood on May 16, injuring seven policemen before he was shot dead.