With concrete barriers and checkpoints, Israeli forces have closed off the Sheikh Jarrah neighborhood in Jerusalem. 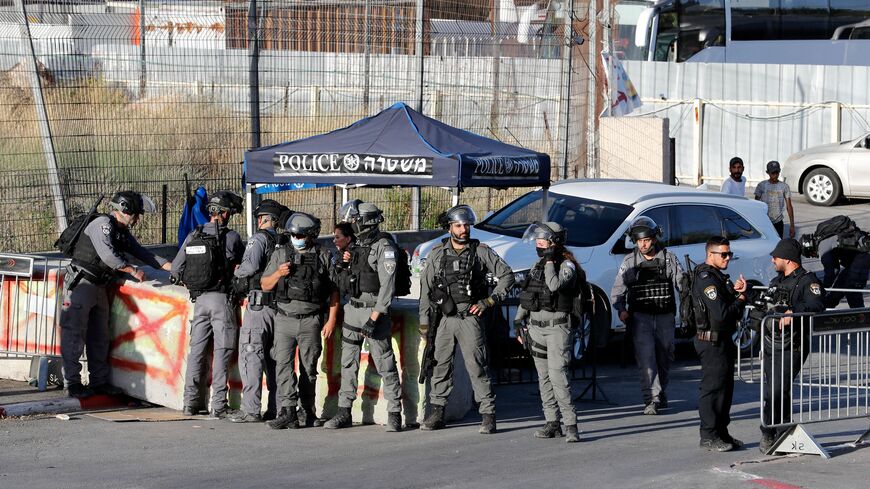 Israeli security forces stand guard to prevent Palestinians from passing through an Israeli police checkpoint at the entrance of the Sheikh Jarrah neighborhood, during a protest by demonstrators demanding the reopening of the roadblock, East Jerusalem, May 29, 2021. - Ahmad Gharabli/AFP via Getty Images

Ever since a Palestinian driver crashed his car May 16 into a police roadblock and injured a number of Israeli policemen, the Israeli forces have locked down the Sheikh Jarrah neighborhood, where 28 families face the risk of eviction and forced displacement, by erecting concrete barriers on all sides of the neighborhood. They have been preventing foreign and Palestinian activists showing solidarity with residents from entering the neighborhood, allowing only the residents to enter and exit the neighborhood based on their identity cards.

The neighborhood of Sheikh Jarrah is located on the eastern side of Jerusalem’s Old City and was built outside the walls of the city. In 1956, 28 Palestinian refugee families who were displaced in 1948 were accommodated in the neighborhood under an agreement signed between the United Nations Relief and Works Agency for Palestine Refugees in the Near East (UNRWA) and the Jordanian government.

The neighborhood is estimated to stretch over 808 dunams (20 acres), its population is estimated at approximately 2,800, and it is run by the Israeli municipality in Jerusalem.

Sheikh Jarrah has always been a recurrent flashpoint in the Palestinian-Israeli conflict. Several Palestinian families were expelled from that neighborhood in 1948. In 1972, Jewish associations claimed that they possessed documents of ownership of the lands on which the neighborhood houses were built. According to the Ashkenazi and Sephardic Jewish committees, these documents date back to the late 19th century.

The case has recently returned to the headlines following the Jerusalem District Court May 2 ruling that gave a number of Palestinian families until August to vacate their homes.

Ziyad al-Hammouri, director of the Jerusalem Center for Social and Economic Rights, told Al-Monitor, “The Israeli occupation forces’ besieging of Sheikh Jarrah neighborhood — which has become an icon of Jerusalem — is a serious step that looks very similar to what happened in al-Shuhada Street in Hebron. In 1994, the occupation had prohibited Palestinians from accessing Hebron in the wake of the Ibrahimi Mosque massacre. Residents of the [Sheikh Jarrah] neighborhood are being inspected, their identities scrutinized, while journalists are being attacked for covering the developments on the ground and exposing Israeli practices to the world.”

He said, “Jerusalem before the month of Ramadan was not a top priority for the world. The occupation had settled the neighborhood’s status [by seeking to expel Palestinians from it] after former US President Donald Trump recognized Jerusalem in 2017 as Israel’s capital. But the popular uprising in Sheikh Jarrah and Bab al-Amud [Damascus Gate] has restored interest in the issue of Jerusalem, while the consequent Israeli war on the Gaza Strip brought back the Palestinian cause to the international headlines.”

Hammouri noted, “Israel controls East Jerusalem. The [Israeli] municipality in Jerusalem keeps preventing Palestinians from building new homes, by imposing exorbitant sums that Jerusalemites cannot afford in exchange for building permits. Such [restrictions] aim at giving the holy city a Jewish character, reducing the Palestinian presence and trying to displace Jerusalemites and replace them with settlers."

He added, “The Israeli courts have approved [in the past years] the demolition of 22,000 buildings in the city of Jerusalem, and these decisions are expected to be implemented at any time. The coming period requires that UNRWA exerts more pressure on the Israeli occupation to protect the Sheikh Jarrah refugee families threatened with expulsion, and prevent the occupation forces from proceeding with its efforts to Judaize the neighborhood and displace its indigenous inhabitants.”

According to a survey conducted by the United Nations Office for the Coordination of Humanitarian Affairs in 2020, eviction lawsuits were filed against at least 218 Palestinian families in East Jerusalem, including families in Sheikh Jarrah. Most of the lawsuits were initiated by settler associations. These lawsuits expose 970 people, including 424 children, to the risk of displacement.

Fakhri Abu Diab, a Jerusalemite member of the Committee for the Defense of Silwan, told Al-Monitor, “Israel wants to turn the Sheikh Jarrah neighborhood into a closed military site, and it has closed the entrances to the neighborhood with cement blocks and iron barriers to tighten the noose around the residents and eventually force them to leave their homes.”

He noted, “The Israeli measures also come to prevent the residents of the neighborhood from communicating with other areas in East Jerusalem, to avoid the union of its people in the face of Zionist plans, as happened in the uprising of Bab al-Asbat [in 2017], Bab al-Rahma [in 2019] and Bab al-Amud [in April of this year], to push the residents to surrender and accept Israeli dictates that aim to break the steadfastness of the Jerusalemites.”

Abu Diab added, "The occupation is continuously seeking to Judaize the Sheikh Jarrah neighborhood because the latter serves as a protective shield of Al-Aqsa Mosque, and it connects the Jerusalem neighborhoods in the north of Jerusalem to the occupied West Bank. Sheikh Jarrah is also adjacent to the territories occupied in 1948. What’s more, Israel is exploiting Sheikh Jarrah to pursue its Judaizing settlement project called 'The Holy Basin,' which extends from Sheikh Jarrah to the town of Silwan.”

He pointed out that “the neighborhood makes it easier for settlers to communicate with the western part of Jerusalem in the area of ​​the Mount of Olives and the Hebrew University. Also, the neighborhood is home to many Zionist institutions, such as the Ministry of Interior and the Border Guard Command, and to the 'Mufti Palace,' which was controlled by settlement associations with the aim of Judaizing the Palestinian identity and memory.”

Abu Diab concluded, “Zionist courts are part of the Israeli system that is marred by counterfeiting and forgery, and for decades they have been issuing many unfair and unjust rulings against the Palestinians in Jerusalem, who possess documents proving their ownership to their property and homes. These courts want their rulings to be in line with the interests of the settlers, as they seek to Judaize the holy city, its neighborhoods and Islamic and historical landmarks.”