Israel's Supreme Court gave four families facing eviction in the Sheikh Jarrah neighborhood in Jerusalem until Nov. 2 to respond to a settlement agreement. 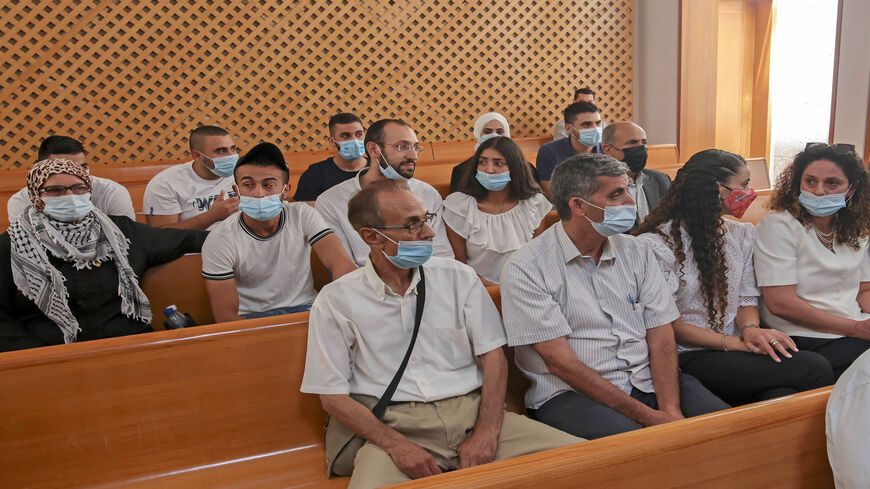 In what Palestinians are calling a dangerous Israeli precedent, the Israeli Supreme Court gave four families facing eviction in the Sheikh Jarrah neighborhood in Jerusalem until Nov. 2 to respond to a settlement agreement with the settlement association on the ownership of the land where their houses are built.

The court’s offer, which it said is non-binding, came before deciding on the case regarding the eviction of Palestinian families in the Sheikh Jarrah neighborhood. Under the proposed compromise, the Palestinian families in the neighborhood shall be protected tenants, not the owners of the land, which recognizes the ownership of the settlement association Nahalat Shimon to the land, without prejudice to the families' demands for ownership of the land in the future final settlement.

In its deliberations Aug. 2, the Supreme Court had ended the decision to displace families from the Sheikh Jarrah neighborhood in Jerusalem, without issuing a final decision on the case.

Nabil al-Kurd, 77, a landowner facing eviction in the Sheikh Jarrah neighborhood, told Al-Monitor, “The decision of the Zionist court is totally and completely rejected, and we do not count on the decisions of the Israeli courts, which are based on forgery and circumventing the law, considering that they are political courts siding with the occupation and its settlers only.”

In May, the video showing Mona al-Kurd, the Palestinian young woman who lives in one of the houses faced with eviction in the Sheikh Jarrah neighborhood, speaking to a settler sharing her family’s house, went viral. The settler, Yacoub, who took over half of the family’s house of Hajj Nabil al-Kurd, appeared with the Israeli court’s decision.

The settler, provoking Mona, said, “Even if I were to leave, you will not return to [the house] and if I don't steal it, someone else will steal it.”

Fakhri Abu Diab, an activist and researcher on Jerusalem affairs, told Al-Monitor, “The Israeli courts are part of the political system and the settlers, and they are working to give their decisions a legal cover in an attempt to overcome the steadfastness of the Sheikh Jarrah neighborhood’s residents and to facilitate the settlers’ seizure of the residents’ homes in the neighborhood. This proves that these courts are unfair, and aim to serve the settlers at the expense of the Palestinians.”

He said, “The four families facing displacement from the neighborhood categorically reject the court's decision to consider them protected tenants for 15 years, because that decision implies their recognition of the settlers’ ownership of their homes and land. The Israeli judiciary is intimidating these families, by threatening them to take measures to expel them from their homes in November, in case no agreement was reached with Nahalat Shimon that claims ownership of the land.”

Abu Diab stressed that the Israeli court, in a dangerous precedent, strengthened the position of the settlement association to legally seize the homes of the neighborhood, without relying on evidence and data provided by the residents of the Sheikh Jarrah neighborhood. He explained that the international position supports the rights of families facing displacement, and that is why the courts were involved in this case to remove this pressure and embarrassment, get the Palestinian recognition of the settlers’ ownership and show that the dispute over the neighborhood is a dispute over property and not a political one.

The Jerusalemite activist added, “The Israeli courts may delay the decision to evacuate the families of the Sheikh Jarrah neighborhood, as happened in many cases related to the Jerusalem neighborhoods of al-Bustan, Batn al-Hawa and al-Khan al-Ahmar, out of fear of a Palestinian and popular movement opposing these decisions and which would escalate the situation in Jerusalem again.”

Ziad al-Hammouri, director of the Jerusalem Center for Social and Economic Rights, told Al-Monitor, “The Israeli court’s decision is not final, after giving the Sheikh Jarrah neighborhood’s families facing eviction until November to settle their situation with Nahalat Shimon in a way that gives the settlers the right to control their lands and homes. The four families reject any settlement with this association because they are the true owners of the land.”

He noted, “Israel does not want the situation to escalate in the neighborhood, to avoid any clashes or popular movements against the occupation, or their spread in the Palestinian territories, especially in light of the Palestinian resistance’s remarks that Jerusalem and the Sheikh Jarrah neighborhood causes are a priority. This would prompt the Israeli court to postpone the case again, as happened over the past months.”

He said that the apparent objective of Israel's policies are "to change the city’s demography to the advantage of the settlers and reduce the Arab presence. This is added to the geographical importance of the neighborhood, which is close to the western part of the city of Jerusalem.”