Eleven families are about to be thrown out of their home in Jerusalem’s Sheikh Jarrah neighborhood to make room for settlers. 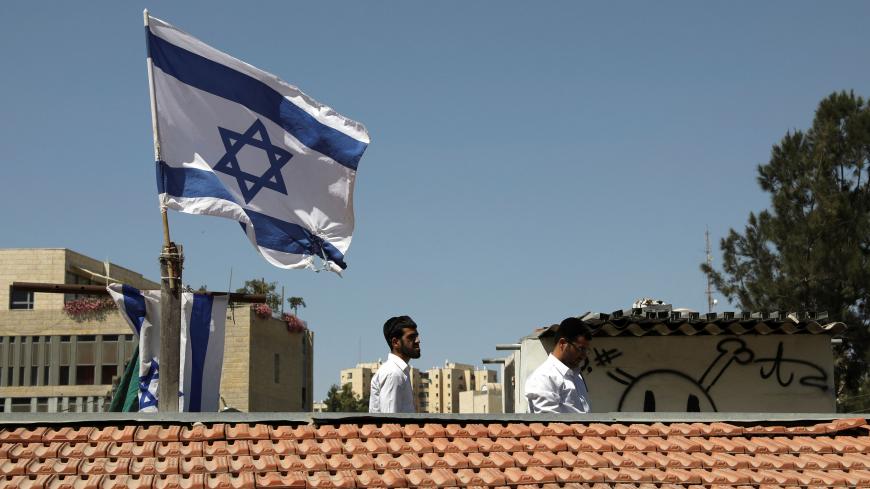 Jewish settlers stand on a rooftop of a house taken over by Jewish settlers in the Sheikh Jarrah neighborhood in East Jerusalem, Sept. 8, 2017. - REUTERS/Ammar Awad

RAMALLAH, West Bank — About 36 Palestinians, including six children from the Sabbagh family in the East Jerusalem neighborhood of Sheikh Jarrah, live in constant fear of the Israeli Execution Office’s decision regarding their eviction in favor of Israeli settlers.

The Execution Office, which is the competent authority to implement court decisions, notified Jan. 3 five families of the Sabbagh family that they had until Jan. 23 to vacate their homes.

The family’s lawyer, Husni Abu Hussein, however, managed Jan. 14 to obtain a freeze order until Feb. 16, since the Central Court and Supreme Court have yet to rule on the land ownership in the neighborhood.

The case goes back to 2012 when the family’s lawyers resorted to the Israeli Central Court to file a lawsuit against Nahalat Shimon, an organization that represents settlers, claiming that the neighborhood’s lands, including the houses of the Sabbagh families, belong to settlers.

The court rejected to start a lawsuit on the land ownership, which prompted lawyers to appeal before the Israeli Supreme Court, according to Abu Hussein. He told Al-Monitor, “The Supreme Court rejected the appeal against the Central Court’s decision on Nov. 15, 2018, which allowed the Execution Office to issue the eviction order, since the Supreme Court is the highest judicial court in Israel."

He added that more than six families in the Sheikh Jarrah neighborhood are facing eviction, along with the Sabbagh family.

Mohammed Sabbagh, 70, has been living with his family in a 60-square-meter (646-square-feet) apartment in the neighborhood since 1962.

The eviction of the Sabbagh families has attracted European attention as European Union heads of missions in Jerusalem and Ramallah visited the Sabbagh family on Jan. 21, who said in a press statement, “Further settlement plans including evictions are being moved forward in Sheikh Jarrah.”

It continued, “The policy of settlement construction and expansion, including in East Jerusalem, is illegal under international law, and its continuation undermines the viability of the two-state solution and the prospect for a lasting peace."

The Sheikh Jarrah neighborhood has been witnessing an uptick in the attacks by settler organizations, which prompted its residents to organize a demonstration on Jan. 18, in which dozens of Jerusalemites and Israeli left-wing activists participated, to protest against the decision to evacuate the Sabbagh family and against the expansion of settlements in the neighborhood.

Besides the Sabbagh family, more than six other Palestinian families from Sheikh Jarrah face the threat of eviction from their home, including al-Kurd, al-Qassem, al-Dajani and al-Daoudi families. All of them are waiting for the court’s decision in the case.

Saleh Abu Diab, a member of the Sheikh Jarrah neighborhood committee, told Al-Monitor, “The Supreme Court of Israel convened on Jan. 30 and considered the appeal against the decision of the Magistrate's Court on four of the Palestinian families. The Supreme Court requests Israeli settlers to submit all documents they have proving their ownership of the land where the houses are built to the next session slated for March.”

Abu Diab is one of the organizers of the weekly demonstration in the neighborhood against the settlement activities, working with peace activists from around the world and diplomatic missions. The last protest was held on Feb. 1, when he was arrested for a few hours before he was released on bail of 5,000 Israeli shekels ($1,373) and a restraining order, prohibiting him from entering the court for 15 days, from the day of arrest.

“We decided to expand our weekly protests in the neighborhood against the sweeping settlements. We also decided to work with peace activists around the world and diplomatic missions. Jerusalemites are facing a systematic expulsion from their homes and neighborhoods, which only grew worse after US President Donald Trump recognized Jerusalem as the capital of Israel,” he told Al-Monitor.

Abu Diab noted, “Eleven families have been notified of eviction and that's only paving the way for the expulsion of the entire population of the neighborhood, amounting to 1,200 residents, since all of them have the same conditions as those notified.”

Jerusalem’s Sheikh Jarrah neighborhood was established in 1956 as per an agreement signed by United Nations Relief and Works Agency for Palestine Refugees in the Near East (UNRWA) and the Jordanian government, which governed the West Bank prior to its occupation in 1967. Homes were built to accommodate 28 families that were forcibly expelled from their lands during 1948.

Over the years, the number of families increased, but in 1972, Nahalat Shimon declared that settlers owned the land, where Palestinian homes were built.

“The eviction of Sheikh Jarrah — should it happen — would be another nakba [catastrophe]. We are making every effort to prevent this forcible expulsion by communicating with European diplomatic missions. We sent an urgent appeal to King Abdullah II of Jordan to intervene because those houses were built under an agreement between the Jordanian government and UNRWA,” Abu Diab said.

Abu Hussein noted, “The Israeli authorities have intensified its measures and plans to take over more Palestinian lands in East Jerusalem. The most recent of which was the government’s approval in May 2018 of a plan to register and redemarcate lands in East Jerusalem, which is slated to be implemented by the land registration department at the Israeli Ministry of Justice.”

The first phase of this project is scheduled to be implemented by 2021, and the second phase by 2025.

Khalil Tufakji, director of the Maps and Survey Department at Jerusalem’s Orient House, told Al-Monitor that the neighborhood faces a major settlement project, whereby it would be completely destroyed to make room for 200 settler housing units. He noted that the land settlement project in East Jerusalem aims to register the city’s lands in the name of Jewish settlers, namely the lands that are not owned by anyone with proof that they belong to the state.

Palestinians feel that Israel wants to benefit from the current political conditions, especially in light of the unmatched US support, and from the stalemate in the peace process in order to systematically implement the settlement projects in Jerusalem, with the aim of further weakening the Palestinian presence. What is happening in Sheikh Jarrah now could be seen as a prelude to complete demolition and replacement with a settlement neighborhood.