Several Palestinian families in the East Jerusalem neighborhood of Sheikh Jarrah are forced to share their homes with Israeli settlers. 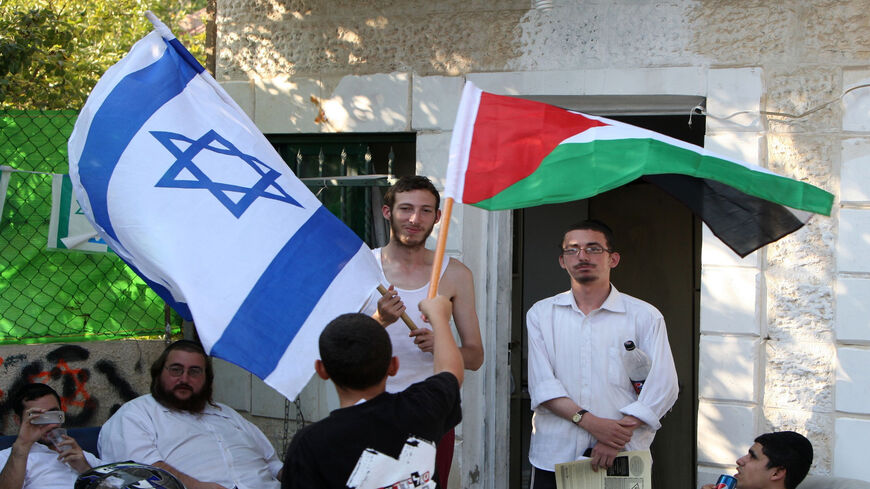 House No. 13 of the Palestinian Al-Kurd family is located in Karm al-Jaouni in the East Jerusalem neighborhood of Sheikh Jarrah. At the entrance, a large banner reads, “We will not leave.” A group of Israeli settlers share part of the family’s house. The family has become a symbol of resistance against Israeli decisions that aim to evict Palestinians from the neighborhood.

In 1956, the Sheikh Jarrah neighborhood welcomed 28 Palestinian families that were displaced from the 1948 occupied territories as per an agreement between the United Nations Relief and Works Agency for Palestine Refugees in the Near East (UNRWA) and the Jordanian government. The surface area of the neighborhood is estimated at 808 dunams (200 acres), and it is home today to around 2,800 people. The Israeli municipality in Jerusalem manages it.

In May, a video of a conversation between Muna al-Kurd, a Palestinian woman who lives in one of the houses threatened with eviction, and a settler who occupies half of her house, went viral. In the video, Yaacoub, the settler who took over half of Nabil al-Kurd’s family house per a decision from an Israeli court, says to Muna, “If I go, you don’t go back [to the house]. … If I don’t steal it [the house], someone else will steal it.”

Nabil, 77, said that the Israeli authorities want to expel him and his family from his home by force of arms. They are forging documents and passing laws that suit their interests and those of the settlers, he said, noting that he and his family were displaced from their house in Jaffa during the Palestinian Nakba in 1948. He was only four at the time, and now he is facing eviction and expulsion from his house in Sheikh Jarrah under the pretext that the land it was built on is owned by Jews.

Nabil told Al-Monitor, “I submitted a request to the Israeli municipality in Jerusalem in 1999 to expand my house of 50 square meters [538 square feet] and two rooms, where eight people live. [We wanted] to build an additional room in the backyard, but the municipality refused to take the request or grant us a building permit.”

He said, “One of my children decided to build an additional room in the backyard in 2009. It was almost complete when the Israeli municipality handed me a violation ticket, and my family and I were banned from entering the room after its keys were confiscated and a fine of $92,000 was imposed, to be settled over nine years. When the municipality ordered us to destroy it, our request [to keep the room] was refused under the pretext that we have absolutely no right to do anything with the room.”

Nabil added, “In that same year, we were surprised that the Israeli municipality granted 15 young settlers the right to live in the room and share the house with us. Israel was testing our resilience and clamping down on us to push us to leave and forcibly displace us. But I still insist that expulsion and forced displacement are worse than death, and I will not leave. The settlers bother us all the time by throwing stones and litter when we enter and exit the house and insulting my family.”

The Jordanian Ministry of Housing and Construction signed an agreement with UNRWA in 1956 to settle 28 refugee families in Jerusalem, provided that these families relinquish their right to UNRWA’s food aid, while keeping its health and education services.

Muna, 23, who has a degree in media from Birzeit University, told Al-Monitor, “My family has been suffering since a group of settlers took over the house, and due to the ongoing restrictions from the Israeli police that wants to forcibly expel us from our home. Israel’s Supreme Court is trying to force the families threatened with eviction, including mine, to recognize that the land where we live is owned by settlers and that we are protected tenants. But we all refuse this.”

She said, “I tried to reflect every moment of suffering of the neighborhood’s citizens through my Instagram account to show the world the savageness of the occupation with the citizens who are facing the risk of eviction from their houses.”

Muna added, “My brother, Mohammed, and I were both arrested on June 6, after the Israeli police raided our house. During the questioning, I was threatened and my defense attorney was forbidden from being present. The Israeli authorities released my brother and I a few hours after the arrest.”

On Aug. 2, the Israeli Supreme Court delayed a decision in the case of the Sheikh Jarrah families.

Fakhri Abu Diab, a Jerusalemite member of the Committee for the Defense of Silwan, told Al-Monitor, “What is happening in the Sheikh Jarrah neighborhood against a number of families is a new Palestinian catastrophe, which aims to tighten the noose around the residents of the neighborhood adjacent to the territories that were occupied in 1948, as well as to advance [Israel’s] Judaization projects that are in full swing, including the so-called Holy Basin project, which extends from the Sheikh Jarrah neighborhood to the town of Silwan.”

He noted, “The Israeli municipality is seeking to establish more than 500 settlement units in Sheikh Jarrah, including a synagogue and a Torah garden, and link them with the western part of the city of Jerusalem, to bring about demographic change made up of settlers at the expense of the Palestinians. Israeli authorities have been recently punishing Jerusalemites by demolishing their homes, withdrawing their identities and banishing them from the city of Jerusalem.”

Diab concluded, “Forcibly expelling the families from their houses is a clear violation of international law.” He called on Jordan and the international community to pressure Israel to stop its Judaization plans against the citizens of Jerusalem.