The parents of Muna and Mohammed say the twins represent many other residents of Sheikh Jarrah who are fighting to defend their homes. 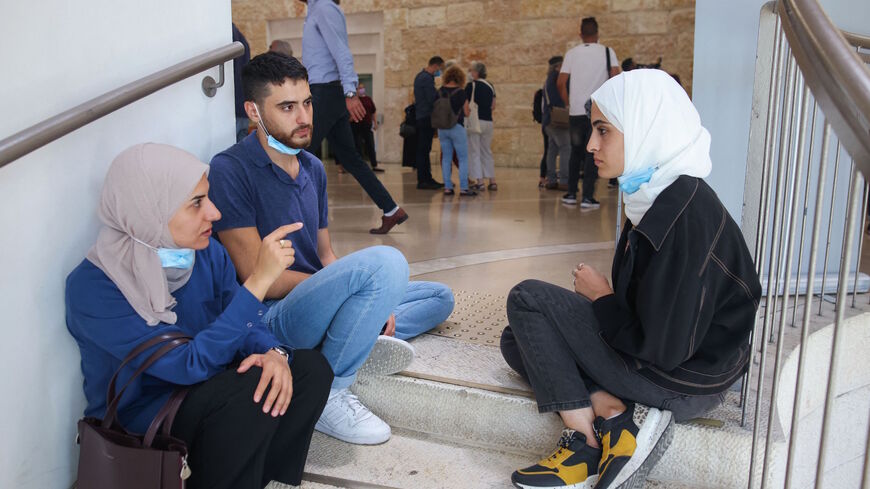 Palestinian sibling activists Mona (R) and Mohammed (C) Al-Kurd wait at the Israeli Supreme Court in Jerusalem as it convenes to rule on Palestinian evictions in east Jerusalem, on Aug. 2, 2021. - AHMAD GHARABLI/AFP via Getty Images

In the Sheikh Jarrah neighborhood of east Jerusalem, 23-year-old twins Muna and Mohammed Al-Kurd were threatened with eviction along with 500 Palestinians living in 28 homes.

Many credit the pair's use of social media on the Israeli Supreme Court to temporarily suspending the eviction of the Hamad, Dajani and Daoudi families Aug. 15 following pressure from the Palestinian and international public.

The suspension of demolitions in the Sheikh Jarrah neighborhood led to a relative calm in the neighborhood and on Sept. 15, Time Magazine included the siblings in its top hundred influential personalities for the year 2021.

The magazine reported, “Charismatic and bold, they became the most recognizable voices of those threatened with losing their homes in Sheikh Jarrah. Around the world, their grassroots organizing helped inspire the Palestinian diaspora to renew protests. And in the US, long Israel’s strongest ally, polls show growing support for Palestinians.”

Muna and Mohammed started documenting the settlers’ efforts to seize houses in Sheikh Jarrah at the age of 12, and by 23, they became global icons.

The world first met Muna Al-Kurd in a video of her engaging in a conversation with the settler Jacob Fauci, who was standing in the garden of her house.

“You are stealing my house,” she told him.

“If I don’t steal it, someone else will steal it,” Fauci replied.

“No one is allowed to steal it,” Muna retorted.

On March 15, Muna began using the hashtag #Save_ Sheikh_Jarrah, which went viral in millions of social media posts in May.

Muna was expelled from a Zoom session of the UN Human Rights Council over a message she wrote after the speech of an Israeli representative.

Muna added that a council official responded to her with a message saying that such comments are not acceptable in the session and that she must delete her message to remain in it.

Mohammed stepped into the international spotlight during an interview on CNN. When his interviewer used the term “evacuation” to describe the neighborhood residents' experience, Mohammed retorted that what is happening is ethnic displacement on the part of an illegal and occupying authority.

“The settlers did not build these houses, and they do not own these lands,” he said.

“The people who refuse to be peacefully displaced are beaten up by the occupation police and subjected to rubber bullets and tear gas,” he added. “We were displaced for the first time from Haifa in 1948, settlers [encroached upon] half of our house in 2009, and we are now threatened with a second displacement,” he continued.

The two siblings were arrested on June 6. Asked about the reason behind their arrest, lawyer Nasser Odeh said, “The Israeli police has recently gotten in the habit of accusing activists in Jerusalem of committing acts that may disturb public security and participating in riots based on nationalist motives.”

The twins were released hours later.

When Al-Monitor reached out to Muna for comment on her selection among Time’s top 100, she referred to the press release that her brother posted on Twitter. In it, Mohammed said their selection “may be a positive indication regarding the centrality of the Palestinian cause in the global public sphere.”

“However, making icons who boil down the struggle of an entire people to one face will not be enough to support the Palestinian people,” he added. “The new era that the Palestinians are witnessing is the product of the cumulative work and struggle of hundreds of thousands of Palestinians who struggled with the colonial system for seven decades without any international recognition or acknowledgment.”

Their mother told Al-Monitor, “I was not as happy about the magazine’s selection of Mohammed and Muna as much as I was about Mohammed’s response on Twitter.”

She said the magazine's recognition of the twins does not mean that they are the only ones suffering in Sheikh Jarrah. All the residents of Sheikh Jarrah are resisting the forced displacement and many others are supporting the neighborhood.

Nabil Al-Kurd, the twins’ father, told Al-Monitor, “Muna and Mohammed did not make this achievement on their own, as this is the result of the efforts of all the Palestinian youth in the city of Jerusalem.”

In response to a question about Israel leaving the residents of the neighborhood alone, Nabil said she hopes the international media attention will pressure Israel to stop the evictions.

Asked the source of the twins’ courage, Nabil said, “My wife, Umm Mohammed, has played a great role in influencing the personalities of Mohammed and Muna. She is a writer and poet.”

He said the twins are uniquie in that they were born and lived in a house with documented proof of ownership by the family.

“The Jordanian government built and handed over to me the main house I live in in 1956, and I build onto the house for my wife and for Mohammed and Muna. I completed the construction work in 2001, but the Israeli government took action based on a court order and sealed the house for nine years,” he said. “This is why when the twins were 12, they started documenting the attacks of the settlers on the house.”

Nabil stressed that he obtained his home legitimately and stressed, “To date, there is no document proving that Israel is more entitled to the neighborhood. But the attempts to forcibly displace Palestinians in Jerusalem came with the support of the administration of former President Donald Trump, so the Israeli government is trying to displace us as soon as possible.”

He concluded, “We call upon the media to keep covering what is happening in Jerusalem, not only to help the residents of Sheikh Jarrah, but also to help all the neighborhoods of Jerusalem that are vulnerable to Judaization, because the issue is purely political and Israeli law only serves the settlers.”

Jerusalem researcher Abeer Ziyad told Al-Monitor, “The two siblings have become a source of inspiration for Palestinian youth to convey their message to the world with tools as simple as a mobile phone to document what is happening inside the neighborhood to the world, as this has led to changing the world’s view of the Palestinians.”

“As Jerusalemites, we take pride in the selection of Muna and Mohammed among 100 influential figures around the world, as this shows that the youth in Jerusalem have the ability to change the world's opinion in favor of the Palestinians without anyone’s help and by solely relying on their will and national culture,” she added.