The Israeli Supreme Court has cancelled an eviction order, siding with the residents of the east Jerusalem neighborhood of Sheikh Jarrah. 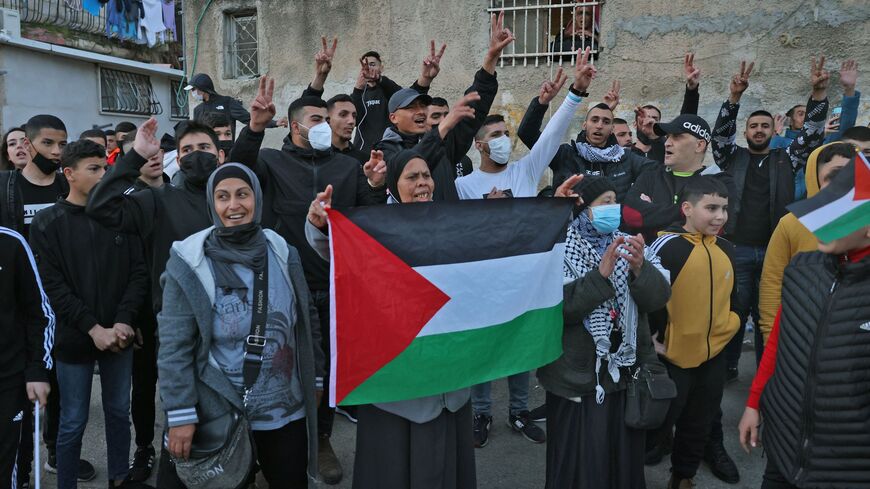 A woman waves a Palestinian flag during a protest in the flashpoint neighborhood of Sheikh Jarrah in Israeli-annexed east Jerusalem on Feb. 18, 2022. - AHMAD GHARABLI/AFP via Getty Images

On March 1, Israel’s Supreme Court halted the eviction of four Palestinian families in the Karam al-Jaouni area of the Sheikh Jarrah neighborhood in east Jerusalem.

According to the ruling, the al-Kurd, al-Jaouni, Skafi and Qassem families will remain in their homes as the Israeli Ministry of Justice examines the ownership documents submitted for the Sheikh Jarrah plots in question. According to Al Jazeera, this process could take years if it is ever finished.

Meanwhile, the four Palestinian families will deposit a symbolic amount of 2,400 shekels ($740) per year into a bank account. If the Justice Ministry rules against the four families, the money will be transferred to the Nahalat Shimon settlement community.

In 2021, the concerned Palestinian families of Sheikh Jarrah unanimously rejected a settlement proposal by the Supreme Court, according to which the neighborhood’s residents would be considered protected tenants of Nahalat Shimon and not official landowners. According to the proposal, Nahalat Shimon will refrain from eviction measures for 15 years after its signing or until ownership is determined.

Palestinian families have lived in the Sheikh Jarrah neighborhood since 1956 under an agreement between the Jordanian government and the United Nations Relief and Works Agency for Palestine Refugees.

However, following Israel's annexation of east Jerusalem after occupying it in 1967 — in an illegal move under international law — tens of thousands of Palestinian families in east Jerusalem were displaced and their homes threatened with demolition. Meanwhile, Israeli policies make it difficult for Palestinians to build new homes.

Speaking to Al-Monitor, Hosni Abu Hussein, a lawyer for Palestinian families in the Sheikh Jarrah neighborhood, said that the Supreme Court’s ruling did not just “freeze” the eviction of the four families, as the Hebrew-language press reported. “This 100-page ruling No. 2401/2021 stipulates that the eviction decision is permanently rescinded,” he explained.

Abu Hussein added, “This is the first time that the Supreme Court has considered a land ownership case after the Palestinian families submitted their ownership documents,” noting that for the first time ever, the court said the settlers' documents are questionable.

Abdel-Fattah Skafi lives in his home in Sheikh Jarrah with 17 other family members. They had obtained the house in 1956 from UNRWA, which provided houses to families that were displaced from West Jerusalem in 1948. “We got the ruling to rescind the eviction decision thanks to the steadfastness of the neighborhood’s residents since 1972, and the rejection of settlement agreements in exchange for leaving our homes,” Skafi told Al-Monitor.

Aref Hammad, head of the Sheikh Jarrah neighborhood housing committee, has lived in the neighborhood since 1956 in a home provided by UNRWA after his family emigrated from the city of Haifa after 1948. Today, 18 family members, including eight children, live in this home. “The court’s decision paves the way for the real battle to prove the true ownership of the Sheikh Jarrah lands,” he told Al-Monitor.

Hammad pointed out that the Israeli courts had ignored all the ownership proof provided by the Palestinian families, such as documents from the Ottoman archives and the Sharia Court in Jerusalem. “The courts viewed Palestinian families as tenants without rights.”

Ahmad Rwaidy, adviser to the Presidential Office for Jerusalem Affairs, told Al-Monitor, “According to international law, the Israeli judicial system does not have legal authority over Palestinian families in Sheikh Jarrah, who live under Israeli occupation, except to serve the interests of the Sheikh Jarrah residents, in virtue of the Fourth Geneva Convention of 1949 and the Hague Convention of 1907.”

He noted that the Supreme Court’s ruling revealed the lack of integrity of the Israeli courts.

“This is proof that the occupation has two judicial systems: a racist judicial system that provides cover to the Israeli government for the forced displacement of Palestinians in east Jerusalem, and another that deals fairly with the Israelis,” Rwaidy explained.

Jerusalem activist Mohammed Abu al-Hummus told Al-Monitor that the ruling “does not eliminate the danger threatening the residents of Sheikh Jarrah, as evidenced by the acts of Knesset member Itamar Ben Gvir, who remained in the neighborhood and has been rallying the hard-line settler community to protest the ruling. Ben Gvir attacked the Palestinian families in Sheikh Jarrah and accused the occupation police and judges of siding with the Palestinians, and thus the people of Sheikh Jarrah remain at risk.”

Jawad Siam, director of the Wadi Hilweh Information Center in Silwan, told Al-Monitor, “The political pressure exerted by the administration of US President Joe Biden and the European Union on Israel as well as by the international media have helped galvanize the international public against the evictions in Sheikh Jarrah because they violate international law, as Israel is an occupying power that does not have the power to issue eviction orders. This is what the Supreme Court based its ruling on, as well as the current government led by Naftali Bennett's desire to avoid a new conflict with the Palestinian resistance in Gaza, as happened in May 2021.”