A Palestinian family in Jerusalem’s Sheikh Jarrah neighborhood, which faces daily harassment and attacks by settlers, was offered $5 million to vacate their home, so that settlers can move in. 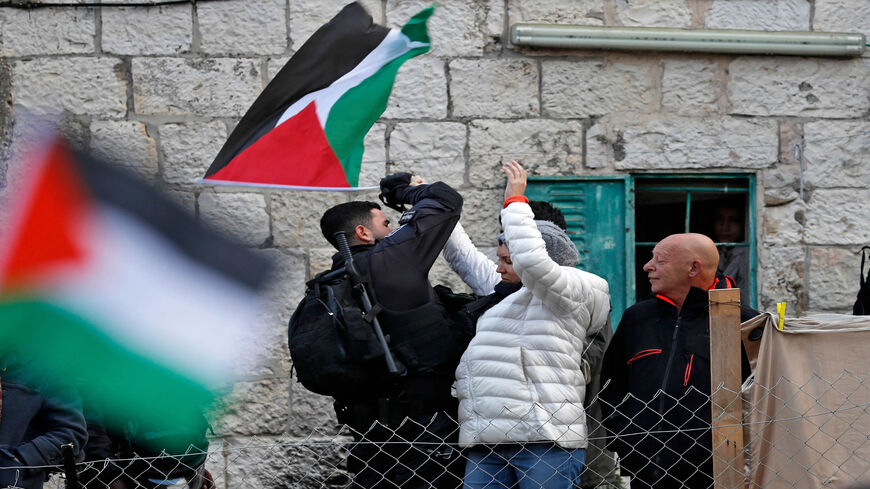 A Palestinian resident scuffles with a member of Israeli security forces during a demonstration in the East Jerusalem neighborhood of Sheikh Jarrah, Dec. 17, 2021. - Ahmad Gharabli/AFP via Getty Images

The Palestinians in the East Jerusalem neighborhood of Sheikh Jarrah are increasingly being harassed and attacked by settlers and the Israeli police, in an effort to push them to vacate their homes and hand them over to settlers.

Twenty-eight Palestinian families have resided in Sheikh Jarrah since 1956, following their displacement in the Palestinian Nakba in 1948. They were settled there in accordance with an agreement between the Jordan Ministry of Development and United Nations Relief and Works Agency for Palestinian Refugees that provided them with housing. Yet Israeli groups claim that the houses were built on land owned by Jews owned before 1948, which the Palestinians deny.

In 1972, Israeli associations forged ownership papers of land in Sheikh Jarrah, which the Palestinians own, and registered a number of land plots in the Israel Lands Administration. Yet the team of lawyers in charge of defending the Palestinians found Turkish papers denying Jewish ownership of this land. The Israeli courts, however, rejected the documents claiming Palestinian families’ ownership of the land and insist on the eviction decisions.

Due to the sharp differences between the settlers and the residents, after they refused to leave their homes, Israel’s highest court offered a middle-ground solution for the eviction of Arab families in the neighborhood. It consists of keeping Palestinian families in their homes in Sheikh Jarrah neighborhood as tenants for 15 years, during which they will pay rent to the Nahalat Shimon settler association. The latter claims ownership of the land on which the homes were built in the Sheikh Jarrah neighborhood.

Skafi’s 14 family members live in Sheikh Jarrah in a house with an area exceeding 100 square meters (1,076 square feet). The house has a garden with fruit trees in the back. But in order for him to reach the house, he needs to pass through a narrow alley next to houses seized by settlers in the past years. This means that he risks being attacked by settlers all the time.

Skafi told Al-Monitor that a group of settlers offered him $5 million to buy the house, but he turned down this offer, because his family, like the other families in the neighborhood, are fighting a battle of steadfastness and a challenge in the face of Israel's plans.

He noted that the settlers attack the family’s children and women daily, on the way out of the house and to school, by pepper-spraying them, verbally abusing them, throwing stones at the house and making annoying noises at night.

He explained that the Israelis' position on Sheikh Jarrah is weak, because the ownership papers in their possession are forged and that this is why they are making financial offers. He noted that because the Israeli judiciary is cooperating with the settlers, they carry on with their attacks to pressure the residents to leave.

Skafi said, “The Israeli Supreme Court's decision to keep Palestinians in their homes as tenants is evidence that the Israeli court does not have proof that the land is owned by the Jews. The court's decision was made based on the possibility that the Palestinians could accept the offer and pay the rent, which would mean a recognition of the Jews' ownership of the land.”

He added, “The family, similar to others in the neighborhood, will not accept any tempting offers by the Israeli authorities, whether financial or an offer to grant them another piece of land as an alternative. We inherited the house from our ancestors and we will pass it on to our children and grandchildren, no matter how long the conflict with the settlers.”

Jerusalemite activist Fakhri Abu Diab confirmed that the families in the Sheikh Jarrah neighborhood are facing a fierce attack by the settlers, similar to the Nakba, as the settlers continue daily to tighten the noose around the neighborhood's residents and move forward with the Judaization projects that are in line with the interests of Israel and its settlers.

Speaking to Al-Monitor, Abu Diab said, “The decline in Arab and international support for the Jerusalemites lately has allowed settlers and the Israeli army to escalate their provocations and racist attacks against the Palestinians in order to expel them from the Jerusalem neighborhoods.”

He noted that the families in Sheikh Jarrah are subjected to daily harassment, and temptations to be pushed out. The steadfastness of Sheikh Jarrah's families is rooted in their belief that the Palestinian cause is a just cause, he said.

Despite their steadfastness in the face of all attempts to displace them, the Israeli Knesset law, passed in 1970, enables the Jews to claim property they owned prior to the 1948 Nakba. Jewish groups claim that the land on which the houses are built in Sheikh Jarrah was owned by Jews before 1948. The law, however, forbids Palestinians from claiming property they owned prior to that year.