Tensions have escalated in the east Jerusalem neighborhood. 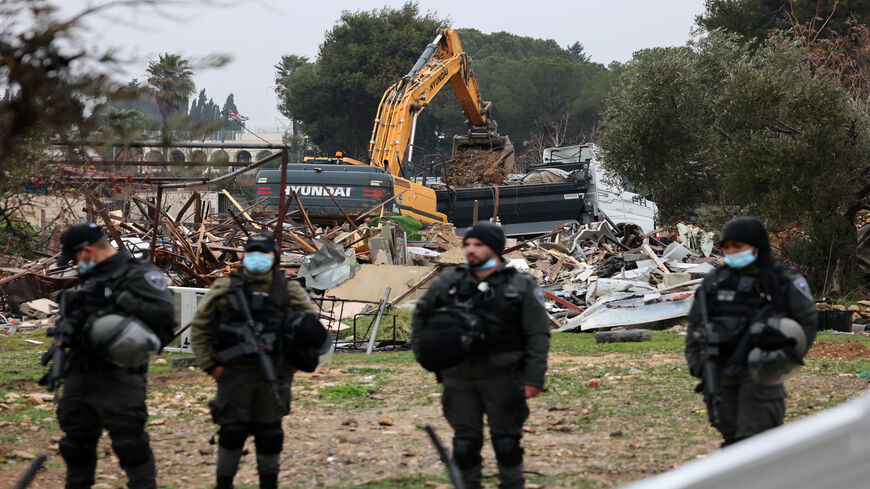 Amid the Israeli authorities’ repeated attempts to evict the residents of the Sheikh Jarrah neighborhood in East Jerusalem so they can demolish their homes and build settlement units, Jerusalemite families in the neighborhood have been taking turns guarding their homes around the clock, for fear of attacks by extremist settlers and the Israeli army.

But despite the locals’ efforts, Israeli police managed to evict Palestinian families from a disputed property in the neighborhood Jan. 19.

On Oct. 4, 2021, the Israeli Supreme Court offered families in the neighborhood a proposal to stay as tenants for 15 years, during which the Palestinian families who reside in their homes will pay the rent to the Nahalat Shimon association, which claims ownership of the land on which the neighborhood's houses are built.

In 1956, 28 Palestinian families who were displaced from their occupied lands in 1948 were relocated to the Sheikh Jarrah neighborhood, according to an agreement between the United Nations Relief and Works Agency for Palestine Refugees in the Near East (UNRWA) and the Jordanian government. The area of Sheikh Jarrah is estimated at 808 dunams (200 acres), and its population is estimated at approximately 2,800 people. Its management and responsibility rest with the Israeli municipality in Jerusalem.

Mahmoud Salhiya, a resident of the neighborhood whose house is threatened with confiscation, told Al-Monitor, “Since my family was expelled from the village of Ein Kerem in 1948, we have been living in fear in the Karam al-Mufti area of Sheikh Jarrah neighborhood due to Israeli threats and incursions. My sons and I take turns guarding our home, where 17 people live, for fear of an attack or a sudden incursion by the army or settlers.”

He said, “I make sure that my children do not leave the house after nightfall, and they are escorted to and from school since settlers could attack them at any moment; they often throw stones and shout curse words at us while walking in the streets.”

Salhiya noted, “Since our family and the other residents rejected the Israeli court’s decisions, large forces of the Israeli army stormed the house to evict us and demolish it, as well as to raze a commercial facility and a plot of land that I also own, under the pretext of building a Jewish school.”

He said that for 23 years, he has been waging a battle in the Israeli courts to prevent the Israeli municipality of Jerusalem from confiscating and demolishing his house, but to no avail.

He pointed out that he and his sons had to barricade themselves on the roof of his house to prevent the Israeli forces from evacuating it. He carried several metal cylinders filled with cooking gas and a gallon of gasoline, and threatened to burn himself and blow up the house if they expelled him and his family, shouting that they will only take the house “over his dead body.”

Salhiya added, “The Israeli forces tried to persuade us to get off the roof, but I refused until they left. The army bulldozers then razed the commercial facility and the plot of land, and gave us until Jan. 25 to vacate the house.”

A few hours after Salhiya spoke to Al-Monitor, large forces of the Israeli army stormed his house at dawn on Jan. 19, severely beating all those inside, completely demolishing it, leaving 13 family members outside under the rain and arresting six members of the family and several activists on the scene.

Salhiya’s house, land and commercial facility are located a few feet from the Shepherd Hotel, which was demolished by Israeli army bulldozers on Jan. 9, 2011, to establish 20 settlement units. The left-wing Israeli Peace Now movement revealed at the time that these works are part of a settlement plan that includes evacuating Palestinian families from the Sheikh Jarrah neighborhood and pushing for the establishment of a settlement on the ruins of Arab homes in the area. Peace Now pointed out that these plans would isolate the neighborhood by establishing a settlement cordon around it, and separating the Old City of Jerusalem from its surroundings.

For years, Fatima Salem, 70, has been guarding her house in the Sheikh Jarrah neighborhood, for fear of settlers’ attacks. She told Al-Monitor, “In December, a group of settlers laid barbed wire around my land, adjacent to my house, claiming that it belongs to them.”

She received a decision from the Israeli Supreme Court on Dec. 29 to vacate her 200-square-meter (2,153 square feet) house where 11 people live.

Salem insists on staying in her home and refuses to leave under any circumstances in light of the escalating attacks by the army and settlers, explaining that this will only increase her strength and steadfastness to face all these harassment and attacks.

Meanwhile, Nasser al-Hadmi, head of the Jerusalem Committee for Resisting Displacement, told Al-Monitor, “The Israeli army and the Jerusalem municipality [insisted] on demolishing the Salhiya family’s house, given its strategic geographic location a few meters from the [Jerusalem] mufti’s house, a large part of which was demolished to build a settlement neighborhood. The house is also located near the Karam al-Mufti area, which the municipality plans to turn into a public park to serve the settlement neighborhood, thus enabling settlers to move freely and easily within Sheikh Jarrah.”

He said, “The Israeli authorities claim that they will build a school on the ruins of the destroyed house, in addition to establishing a car park for settlers on the plot of land adjacent to the Salhiya family's home.”

Hadmi noted that the Israeli municipality of Jerusalem wants to exercise its authority in the area by seizing all Arab neighborhoods in the city, especially after the US recognition of Jerusalem as Israel’s capital. It also plans to change the city’s features and turn it into a Jewish city, although international law still considers the city to be occupied.

He added, “Israel wants geographical integration in the Sheikh Jarrah neighborhood, specifically from the Karam al-Mufti area to the settlement outpost in the neighborhood, so that this would be an entry point for the Israeli authorities to judaize the Wadi al-Joz neighborhood, which is the only industrial area in Jerusalem. Wadi al-Joz is currently witnessing a major campaign to control it and turn it into a hi-tech zone.”

Hadmi concluded, “The Israeli authorities are greatly interested in judaizing the Sheikh Jarrah neighborhood, which separates East and West Jerusalem, so it can be a geographical extension to enter the eastern part of the city and reach full control over it.”