Israel is preparing to begin work on a project known as "Silicon Wadi" in Jerusalem in what locals perceive as another move to alter the city’s demographic makeup and infrastructure. 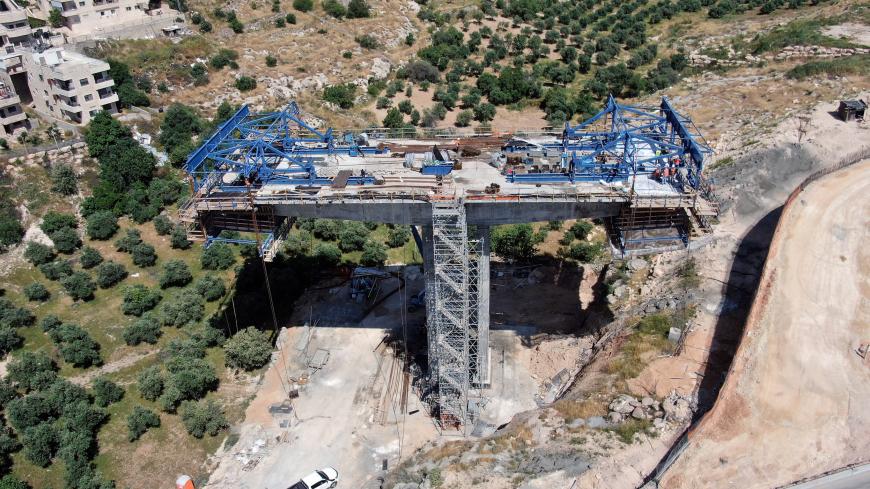 An aerial view shows a bridge under construction as part of the "American Road," an Israeli ring road that is being built through East Jerusalem, May 10, 2020. - REUTERS/Ilan Rosenberg

RAMALLAH, West Bank — The Israeli municipality in Jerusalem is embarking on a mega project it dubbed "Silicon Wadi" (Arabic for "Silicon Valley," a reference to the US region where thousands of tech giants are based) in the Wadi al-Joz neighborhood of East Jerusalem, according to the Israeli Public Broadcasting Corporation.

The project, announced June 3, is designed to create a technological, financial, business, commercial and hospitality hub. The plan allocates 250,000 square meters to high-tech industrial employment centers, 50,000 to shopping centers and another 50,000 to hotels. The construction, which will take until 2022, will cost an estimated 2.1 billion shekels ($600 million).

If completed, the project will destroy an existing industrial area in East Jerusalem, where dozens of shops, restaurants and facilities like vehicle repair shops and parts stores are located.

Since May 31, the Israeli municipality in Jerusalem has distributed eviction notices to 33 facilities and shops in the industrial area, according to which they have until Dec. 30 to leave before their shops are demolished, the chairman of the Chamber of Commerce and Industry, Kamal Obeidat, told Al-Monitor. Another 17 sites are expected to receive the same news.

Obeidat said Wadi al-Joz, only a few hundreds of meters away from Jerusalem’s Old City, is private Waqf-administered land, of which the al-Khatib family is the largest owner. He warned against some Palestinians consenting to the project, which targets the livelihoods of the Jerusalemites. If implemented, the project would alter the city’s landscape and erase the Arab and historic scenery of its souks, he added.

Rumors circulated among Palestinian Jerusalemites that the al-Khatib family consented to the project. The family denied the rumors in a June 4 statement, writing, “We did not and absolutely will not sign any partnership agreement with the Jerusalem municipality,” and “We have not and will not consent to or sign any eviction, demolition, removal or partnership in this regard.”

The announcement of the Silicon Wadi project came as the Israeli government prepares to annex parts of the West Bank in line with the US Mideast peace plan. The plan, which US President Donald Trump announced Jan. 28, treats Jerusalem as the unified capital of Israel. The project would alter the demographic balance of East Jerusalem, where more than 360,000 Palestinians live.

The Palestinian Authority’s appointed governor for Jerusalem, Adnan Ghaith, told Al-Monitor that the project in Wadi al-Joz is yet another settlement and Israelization project by Israel and its arm, the Jerusalem municipality. He added that such projects are based on the expropriation and demolition of the citizens’ properties, as 33 citizens received notices to evacuate their shops before the end of the year. He went on that armed with US protection, Israel is working to turn Jerusalem into a Jewish-majority city.

According to the eviction notice, of which Al-Monitor obtained a copy, the municipality’s planning and construction committee approved the plan Jan. 6. It claimed the project will create thousands of jobs for the residents of East Jerusalem and that the municipality will develop the city’s infrastructure, roads and public squares to the benefit of the people.

Speaking to Al-Monitor, Ziad al-Hammouri, director of the Jerusalem Center for Social and Economic Rights, warned against the risks of the project. He stated, “If implemented, the project will serve as a connection between the outposts in Sheikh Jarrah and Israeli centers in the city, which would give the area a Jewish character, especially with the construction of towers in Sheikh Jarrah, Musrara and Silwan. That would destroy the Arab identity of the city.”

Hammouri went on, “According to the available information, Israel will build two hotels, business parks and a high-tech educational facility as part of the project, using the false claim that it will serve the Jerusalemites and improve their conditions. Yet, in reality, the project is a continuation of the Judaization project around the Old City of Jerusalem and will pave the way for the infiltration of the settlers. This is particularly true since the investors in the project are Israelis.”

Hammouri pointed out that the towers and buildings are to be built along the main street of Wadi al-Joz, stretching to the Ras al-Amud neighborhood, linking the project to the settlements of Ma'ale HaZeitim and Ma'ale David as well as some Jewish graves, which will facilitate the settlers’ movement among the areas.

Hammouri indicated that the project will add a finishing touch to a series of settlement projects that encircle and stifle the Old City of Jerusalem.

Zakaria Odeh, coordinator of the Civic Coalition for Defending Palestinians' Rights in Jerusalem, told Al-Monitor that Wadi al-Joz project is a continuation of another the Israeli municipality has been working on for years to encircle the city center with settlement projects, furthering annexation and Judaization goals and expanding Israeli sovereignty over all of Jerusalem.

Odeh noted, “If implemented, the project would destroy the Palestinian economy there, since shops and facilities will be demolished in order for Israeli business centers to be set up. The Palestinians could have the simple labor, but the greater good will go to Israel.”

Since Jerusalem was occupied in 1967, Israel has neither stopped its Judaization projects nor its settlement activities, with the goal of bringing about a demographic change to the advantage of the settlers. It has been building settlements around and within the city, surrounding, isolating and preventing any geographical connection between the Palestinian neighborhoods. The Silicon Wadi project in Wadi al-Joz is another building block in the city's overall settlement project.