Jerusalemite families are facing the threat of eviction and demolition of their homes, as Israeli settlers claim they own the lands where they are dwelling. 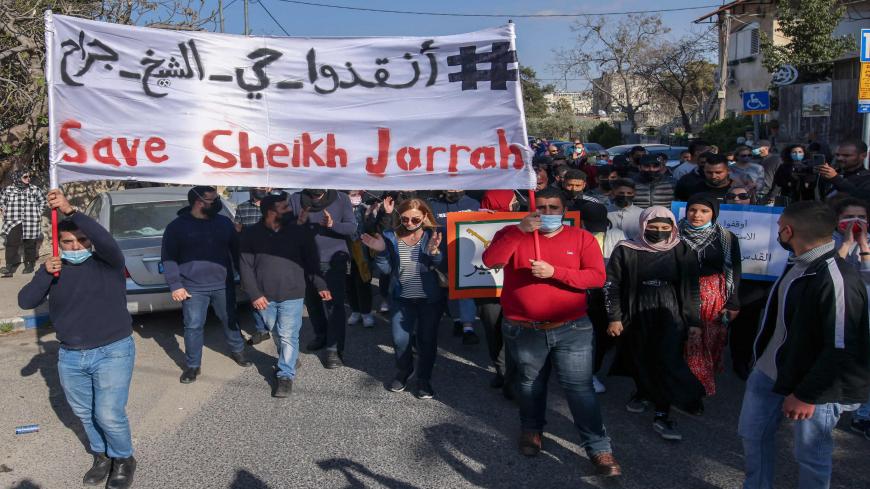 RAMALLAH, West Bank — Some 500 Jerusalemites living in 28 housing units in the Sheikh Jarrah neighborhood, in the north of Jerusalem’s Old City, face the risk of eviction at the hands of the Israeli authorities in favor of Jewish settler organizations, on the grounds that the latter own the land.

On March 19, the neighborhood’s residents began a protest against the eviction plan, with hundreds of Jerusalemites taking to the streets and participating in a march. Prior to that, an online campaign was launched March 15, dubbed “Save the Sheikh Jarrah Neighborhood.”

Yaqoub Abu Arafa, member of the Sheikh Jarrah neighborhood committee, told Al-Monitor, “Families are threatened with eviction. The families have been living in housing units that were established in 1954 by the UNRWA, as the first attempt to settle refugees.”

He said that the Jordanian government, which had jurisdiction over the West Bank at the time, cooperated with the United Nations Relief and Works Agency for Palestine Refugees in the Near East to build the project on an area of 16 dunams (4 acres). Abu Arafa explained that UNRWA financed the construction of the housing units and handed them over to the families in exchange for giving up their rights and status as refugees, including the right to education, care and all other services provided by the UN organization.

Abu Arafa noted that the Israeli courts issued several eviction decisions over the past years, the most recent of which was on March 2, ordering three families to vacate their homes, and before that on Feb. 6, ordering another four families to leave, with each household being fined 90,000 Israeli shekels ($27,350) in counsel and court fees. The concerned families will appeal the decisions before the Israeli Supreme Court, according to Abu Arafa.

“What is required today is urgent intervention by UNRWA and the Jordanian government in their capacity as the owners of the project, as well as on the part of the international community to pressure Israel,” Abu Arafa said. He added that the Palestinian Foreign Ministry has started communicating with its Jordanian counterpart to obtain ownership documents of the land where the units are established, and which the settlement organizations claim the ownership of.

Jordanian Foreign Affairs and Expatriates Ministry spokesman Daifallah al-Fayez told Al-Araby Al-Jadeed newspaper March 18, “All the documents that Jordan has have been handed over to the Palestinian Authority [PA] in cooperation with the Palestinian Embassy in Amman.”

Fayez said, “All documents requested and available were authenticated and handed over, even the agreement signed with UNRWA,” in reference to the agreement on building the housing units in the neighborhood.

He added that Jordan is closely following up on the Sheikh Jarrah neighborhood issue, and said there is ongoing cooperation and communication with the PA and the Palestinian Embassy in Amman.

Abu Arafa believes that what is happening in the Sheikh Jarrah neighborhood is a continuation of the Judaization projects targeting Jerusalem, the most prominent of which is the “Silicon Wadi” (Arabic for “Silicon Valley,” a reference to the US region where thousands of tech giants are based) in the Wadi al-Joz neighborhood of East Jerusalem. He stressed that Israel’s main goal is to control the area surrounding the Old City, which is known as the Holy Basin.

On March 18, Palestinian Prime Minister Mohammad Shtayyeh received a group of residents of the Sheikh Jarrah neighborhood and promised them to follow up on the issue in all international forums. “What Israel is doing is aimed at striking the Palestinian presence in all Palestinian lands, including Jerusalem,” he said.

More than 1,500 Jerusalemites in al-Bustan neighborhood in the town of Silwan, dwelling in 100 housing units, face a similar threat. Their homes are threatened with demolition at any moment by the Jerusalem municipality, after the engineering plans submitted by residents were turned down.

Fakhri Abu Dhiab, a member of the Defense Silwan Committee, told Al-Monitor, “The story of the neighborhood dates back to 2004, when the [Israeli] occupation municipality intended to demolish the district to establish a Jewish park. It began issuing demolition orders, but as a result of international pressure Israel did not carry out the demolition.”

Abu Dhiab explained that in 2011, an agreement was reached between the residents of al-Bustan neighborhood, through their lawyer and the Jerusalem municipality, whereby they had to provide engineering plans to obtain a license in accordance with the conditions set by the municipality, such as establishing parks and open spaces in the neighborhood.

“We have been handing these plans to the municipality since 2011, but it kept on turning them down for several reasons, until a semi-final agreement was reached in 2019. But the municipality recently backtracked on its decision and informed us of its intention to demolish the neighborhood, as a result of pressure by right-wing parties on the legal and engineering teams in the municipality,” Abu Dhiab said.

He noted that the municipality’s decision to turn down the plans and its intention to demolish the neighborhood was issued in February, adding, “We were informed of it on March 1.”

On March 19, Jerusalemites began a sit-in in a tent set up in al-Busran neighborhood, in protest of the municipality’s intention to demolish their homes. Hundreds of residents performed Friday prayers in the area and others are set to begin mobilizing at the local and international levels.

Abu Dhiab is a resident of the neighborhood and is also threatened with losing his home due to the Israeli plan to demolish the homes and establish the so-called Biblical national park. “The situation is extremely worrying, and people live in great fear in light of the settlement organizations' intention to control the neighborhood and its surrounding areas — 63% of the residents are children and women,” he said.

Israel has been accelerating the imposition of a de facto policy in Jerusalem, through its settlement plans based on the expulsion of the city’s residents, in order to alter the demography in favor of the settlers in the city.

On March 11, the Israeli authorities renewed its decision to ban the Palestinian governor of Jerusalem, Adnan Ghaith, from leaving his hometown of Silwan, whether for the West Bank or Jerusalem. Ghaith can move within Silwan only, and is forbidden to communicate with 51 Palestinian figures, including President Mahmoud Abbas and the prime minister.

The renewal of the decision aims to restrict Ghaith’s work in his capacity as the highest official in Jerusalem and as Abbas’ representative in the city.

Ghaith, who has been arrested over 18 times since he took office on Aug. 31, 2018, told Al-Monitor, “The [Israeli] occupation authorities are carrying on with their arbitrary policy in the city of Jerusalem by imposing a fait accompli to the extent that Palestinians have no longer any [weighty] presence in the city.”

This comes in tandem with a surge in settlement activities, harassments of Jerusalemites, and the prosecution of religious, political and national figures in Jerusalem, to prevent any Palestinian activity in the city.

Ghaith noted that the military decision that was renewed against him is a continuation of the series of decisions that have targeted him since he assumed his position as governor. The military decision is based on the British Defense (Emergency) Regulations of 1945, whereby he can be prevented from entering the West Bank or communicate with other Palestinian figures, and be banned from participating in any national or social events in Jerusalem or providing humanitarian aid on the ground, as he poses a threat to Israel’s security.