Israel has prioritized the evacuation and demolition of Palestinian homes in the town of Silwan in Jerusalem, in favor of settlement projects, but it measures the Palestinian and international reactions before moving forward with its plans, fearing a repetition of the Sheikh Jarrah neighborhood scenario. 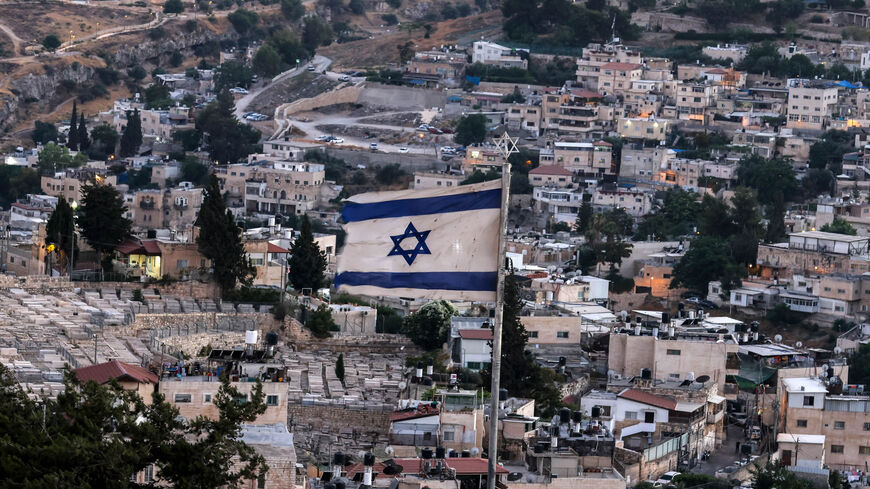 This picture taken from the Mount of the Olives shows an Israeli flag flying with the predominantly Arab neighborhood of Silwan in the background, Jerusalem, July 1, 2021. - Ahmad Gharabli/AFP via Getty Images

An Israeli military force consisting of 40 police vehicles reinforced with special units raided al-Bustan neighborhood in the town of Silwan, south of Al-Aqsa Mosque, early in the morning of June 29. An Israeli bulldozer flattened the butcher shop of Jerusalemite Nidal al-Rajabi.

Rajabi had refused an order to demolish his shop within 21 days on the grounds that it was allegedly built without a license.

Residents of al-Bustan neighborhood in Silwan are afraid more properties will be leveled by Israel. Eviction and demolition threaten 97 homes. According to Israeli plans, tourist parks, themed around biblical stories and figures are to be constructed over these properties.

Yet the recent demolition incident did not go unnoticed. Palestinian citizens confronted Israeli soldiers and threw stones at them, who in turn responded with batons, sound bombs and rubber bombs.

Silwan is located on a series of slopes separated by several valleys. It is deemed the nucleus on which the city of Jerusalem was built more than 5,000 years ago. It stretches over 5,640 dunams (roughly 1,400 acres), comprising 12 neighborhoods, and is inhabited by about 15,000 people. After the 1976 war, Israel confiscated 1,000 dunams (247 acres) of its lands and demolished homes and shops of a surface area of 2,742 dunams (677 acres).

Al-Bustan neighborhood in the town extends over an area of 70 dunams (17 acres). It is home to 1,550 Jerusalemites with over 109 houses. The majority of these Jerusalemites have been served with demolition orders since 2005. Around 97 homes in this neighborhood face imminent demolition under the pretext of being built without a license, 17 of them are subject to Israel’s Kaminitz Law that intensifies enforcement against an unauthorized building. The law, enacted by the extreme right-wing blocs in the Israeli Knesset, entered into force in October 2017.

Under this law, there is no legal course that can be taken to postpone or prevent the demolition of homes built from 2017 onward. This leaves the owners of the threatened homes in al-Bustan neighborhood of Silwan to a bleak fate. The evacuation deadline set for the owners expired June 27.

Murad Abu Shafaa, a member of the Silwan Lands and Real Estate Defense Committee in Jerusalem, told Al-Monitor, “Since 1990 until now, we have been suffering in the corridors of Israeli courts to prove our ownership of our lands in the Silwan neighborhood. But now we face the Kaminitz Law, which does not allow any Jerusalemite to appoint a lawyer to defend his home before the Israeli courts when the demolition decision is issued.”

He slammed the unjust law as tailored to expel Jerusalemites from their homes. “The law serves the settler-Zionist ideology based on displacing Palestinians from Jerusalem in favor of settlers,” he said. “The residents of al-Bustan neighborhood contracted with a Palestinian engineer named Youssef Jabarin, who worked for years to find alternative plans for Israel’s municipality plans in Jerusalem. Israel wants to forcibly displace the inhabitants of al-Bustan neighborhood to construct a biblical garden. But his plans were rejected by the Israeli municipality in Jerusalem and by the Israeli judiciary, with flimsy pretexts. We were told to go build our alternative plans in Europe and the Arab countries, not in East Jerusalem.”

Abu Shafaa stressed that he would not leave his home, threatened with demolition. Also, 10 other homes belonging to his family, cousins ​​and aunts face the same threat. “Even if they demolish our houses, we will remain steadfast and we will rebuild them again,” he added.

In an exceptional incident, settlers from the Elad Settlement Association seized a residential building in Wadi Hilweh neighborhood of Silwan, on July 1. Its owner, Walid Atout and his wife and children, escaped from their home in the building after leaking the video surveillance to the settlement association.

Nasser al-Hadmi, a member of the Jerusalem Committee against Judaization in Jerusalem, told Al-Monitor that Israel has a large number of targets in Silwan that it wants to evacuate and then demolish. He said, “Israel started by demolishing the butcher shop in al-Bustan neighborhood to affirm that it will not back down on its policy and yield to the Palestinian resistance.”

He said, “The prevailing state of relative calm is allowing Israel to implement its plan to evacuate and demolish the homes of the residents of al-Bustan neighborhood. The demolition plan is part of the project of Judaizing and displacing Jerusalemites to control them demographically.”

He added that Israel is prioritizing demolitions and focusing on Silwan to turn it into settlement outposts that serve its Judaization projects. “Israel, however, knows that there is unauthorized construction in other neighborhoods. These are not set as top priorities for now,” he said.

Stressing the strategic importance of the Silwan neighborhood, Hadmi indicated that it is the closest Jerusalem neighborhood from outside the wall of Al-Aqsa Mosque. “Israel has forged a historical narrative consistent with antiquities found in Silwan. It claims the City of David lies below Wadi Hilweh neighborhood. However, this narrative has been scientifically and historically refuted. Many archaeological excavations and tunnels have been dug in the Old City and part of it under Al-Aqsa Mosque toward Silwan. This is why Israel wants to control Silwan.”

He said, “Silwan has problems and weaknesses that Israel has managed to exploit. We have lands whose ownership we cannot prove. These lands are subject to the Israeli Absentee Property Law and then transferred to the settlement associations.”

Khalil al-Tafakji, head of the maps department at the Arab Studies Society in Jerusalem, told Al-Monitor, “The demolishing of a small facility in Silwan with the assistance of a large Israeli force was a trial balloon. Israel wants to explore the Palestinian or international reactions. The demolition in the Sheikh Jarrah neighborhood had turned into a public opinion case that led to US, European and popular pressures. The deportation decisions in that neighborhood were eventually frozen.”

He noted that the demolition process is part of an Israeli program set forth in 1973 based on an Arab minority and a Jewish majority. The demolition policy is part of the process of Palestinian deportation.