The houses of several Palestinian families in East Jerusalem are threatened with destruction or expropriation by a powerful Israeli organization working to expand the settlements. 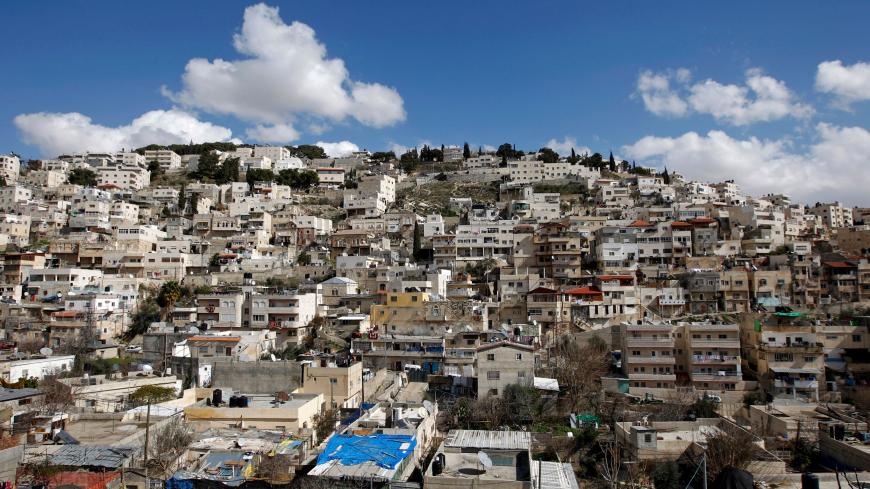 JERUSALEM — The family of Nohad Siam is making legal preparations for the upcoming trial in March 2019 in the case, the Jerusalemite and his brothers, filed to prove the ownership of their grandmother’s house for his mother Mariam Abu Zweir. The house is located in Wadi Helwe in the Silwan district south of the Old City of East Jerusalem.

Ownership of Siam's grandmother’s house is at risk of falling completely to settlers after the Israeli Magistrate Court in Jerusalem ruled Dec. 5 to evict its inhabitants in line with the Elad Settlement Association’s claim of owning the majority of shares in the house.

Elad Association is among the richest NGOs in Israel and operates in about about 70 settlement outposts in Silwan, most of which are located in Wadi Helwe, the neighborhood closest to Al-Aqsa. The association funds archeaological digs in the region and can afford high offers to buy out Palestinian properties.

According to Siam, the Magistrate Court’s decision gave the family until March to evacuate. Siam and his siblings appealed to the Supreme Court to prove their ownership of the land on which the house was built and which documentation shows was their father’s. As is the case of this, for land registered before 1948, Palestinians title deeds are from Ottoman records.

Siam told Al-Monitor that the dispute over the house's ownership dates back to 1990, when the grandmother died and a Palestinian broker forged the papers to transfer ownership of the house to three of her eight heirs. But over the years, the five others managed to expose the forgery and prove that the assignment of property had happened after the grandmother’s death rather than in her will. Ownership was subsequently granted to all eight relatives, six of whom are in Jerusalem and two in Jordan.

Years later, the Elad Association claimed that it had bought the shares of four heirs, offering money that is hard for many Palestinian shareholders to refuse. The association then took control of two additional shares belonging to two aunts living in Jordan based on the so-called absentee law. The dispute over the two remaining shares — those of Siam's mother and uncle living in Jerusalem — continued.

According to Israeli law, the Custodian of Absentee Property is the guardian of properties belonging to Palestinians who were forcibly or voluntarily displaced after Israel was established in 1948. The law considers all their property, including land, houses and bank accounts, "absentee property” and subject to the control of the Israeli state. The law is used by Israel to control the property of Palestinian refugees and Islamic endowments.

Siam noted that his grandmother owns the house, but the land on which it was built belongs to his father, and the court did not take this point into consideration when ruling in favor of Elad Association. He said, “The association is desperate to own the house in collusion with the Israeli authorities.”

The dispute is just one conflict in the daily struggle in Silwan, which contains Al-Aqsa Mosque and which Palestinians see as the center of Palestinian existence in Jerusalem.

In an unprecedented step in November, the Supreme Court upheld the eviction of 700 Palestinians from their houses in the Batn al-Hawa neighborhood, ruling that they were built on land owned by Jews before 1948.

In his book “Mu’jam Buldan Felestin” ("Lexicon of the Country of Palestine"), Palestinian historian Mohammed Shurrab writes that Silwan is the cornerstone of Jerusalem and contains hundreds of Islamic and Christian historical places. Its dozens of springs made it the most fertile agricultural land in Jerusalem. Shurrab wrote that monks lived in Silwan in the seventh century, but the new village built in the 16th century includes Umayyad palaces that are among the most famous Islamic landmarks in Jerusalem after Al-Aqsa Mosque.

After the Israeli occupation of the eastern side of Jerusalem in 1967, the district was divided into nine neighborhoods: Wadi Qudoum and Ras Amud, Ain Lawza, Harat al-Shiyah, Batn al-Hawa (the town center), Beer Ayoub, Harat al-Yaman, Al-Bustan, Wadi Helwe and Wadi Yasoul.

Silwan’s inhabitants quickly increased in the years after the 1967 war, when hundreds of refugees moved in. More than 56,000 Palestinians currently live there, according to Grassroots Jerusalem.

In the early 1990s, the Elad Association began to buy houses under the guardianship of the Custodian of Absentee Property. Houses were then expropriated and controlled under different pretexts, according to Defense Silwan Committee member Fakhri Abu Diab.

Abu Diab told Al-Monitor that there have been thousands of Israeli administrative and military rulings against the district's buildings, some of which were built in the Ottoman days. There are 26 tunnels under historical areas of the town, especially the Umayyad palaces area. Thousands of dunams were expropriated by Israel to build Talmud paths, Torah gardens, a light rail and 73 settlement outposts where 2,417 settlers live.

Abu Diab talked about Israel’s plan to curb the number of Palestinian citizens by reducing buildings and banning construction, especially in the areas adjacent to Al-Aqsa Mosque. He said the municipality has not granted Palestinians permits in the past two years but freely approved all the settlers’ construction applications.

The house of Abu Diab is among those threatened with demolition. The house was built in the 1950s and he and his eight siblings were born there. Since to 1991, the municipality has been seeking to destroy the house on the grounds that the family was doing illegal maintenance and construction work without permits. For almost 30 years now, Abu Diab and his family have been at war with the courts to block the decision to destroy the house.

Despite all these measures, Jerusalemites in Silwan are holding on to their houses and land, which are all they have, even in the face of temptation by well-funded settlement associations.