The Batn al-Hawa neighborhood in east Jerusalem faces a similar fate to the neighborhood of Sheikh Jarrah, where 86 Jerusalem families are threatened with eviction to make way for Israeli settlers. 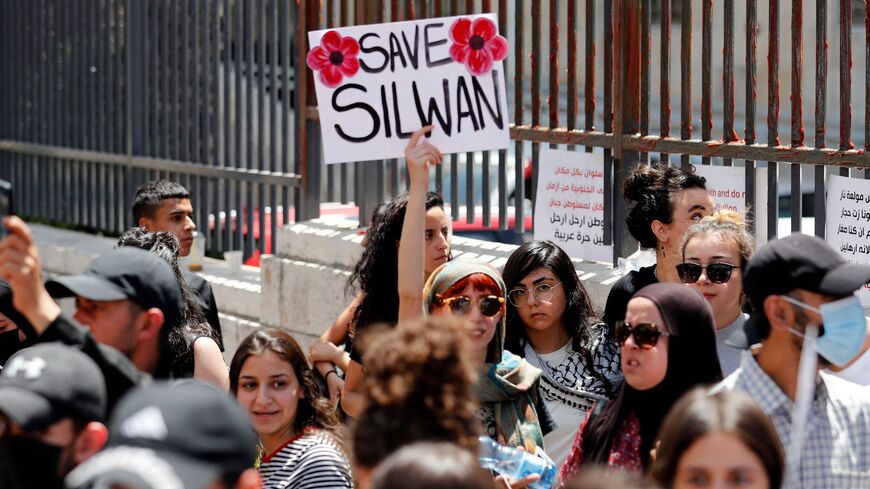 Palestinians shout slogans outside a court in Jerusalem on May 26, 2021, during a protest over Israel's planned eviction of Palestinian families from homes in the Silwan district. - AHMAD GHARABLI/AFP via Getty Images

RAMALLAH, West Bank — Displacement threatens 86 Jerusalemite families, some 750 to 800 people living in 15 buildings in the Batn al-Hawa neighborhood of the east Jerusalem area of Silwan. Their houses are claimed by the Ateret Cohanim settler organization.

The situation in Batn al-Hawa is reminiscent of the events in Sheikh Jarrah, which fanned the flames of the recent armed confrontation between the resistance factions in the Gaza Strip and Israel from May 10 to May 20.

Ateret Cohanim aspires to evict Batn al-Hawa's residents and make the neighborhood into a settlement linked to the outposts established in other Jerusalem neighborhoods.

Silwan, located south of the Mughrabi Gate of the Old City, has been the site of intense settlement activity that started with the establishment of two outposts in 2004. In 2014, Jewish settlers bought several properties in the neighborhoods of Wadi Hilweh and Baidoun quarters in Silwan, as well as land in Batn al-Hawa. On April 8, 2021, settlers took over two residential buildings in Batn al-Hawa and a number of Palestinian properties were acquired by the Ateret Cohanim settler organization.

Ateret Cohenim claims the houses built in Batn al-Hawa are constructed on land owned by Yemeni Jews who lived in the neighborhood before the establishment of the Israeli state in 1948.

In 2018, the organization opened the Jewish Yemeni Heritage Center in Batn al-Hawa. It claimed the property on which the center stands was used as a synagogue in the 19th century by Yemeni Jews.

Zuhair al-Rajabi, the head of the local council in Batn al-Hawa, told Al-Monitor that in 2015, Ateret Cohanim delivered eviction notices to the residents of the Batn al-Hawa neighborhood claiming ownership of the land. The residents sought legal redress, he added.

Israeli courts have repeatedly ruled in favor of Ateret Cohanim. Residents have lodged appeals before the District Court and the Supreme Court, and the cases are still under review.

The District Court has repeatedly postponed ruling on the appeals, asking Israeli Attorney-General Avichai Mandelblit to weigh in on the cases. The Supreme Court is currently reviewing the appeals submitted to it.

“We have deeds and we have been living in the neighborhood for more than 60 years,” Rajabi said, pointing out that the settlers’ association claims the land on which the houses are built belongs to Yemeni Jews who lived there in 1892.

The local and international uproar over the Sheikh Jarrah neighborhood gave Batn al-Hawa residents hope. Rajabi said, “What happened in the Sheikh Jarrah neighborhood generated solidarity and unity between the residents and the families of Jerusalem as a whole. We are trying to defend our homes by all possible means. This includes resorting to the Israeli judiciary, which we do not trust and which does not do us justice. But we have no other option." He said the residents are also considering taking their case to the International Criminal Court.

The recent fighting between the resistance factions and Israel in Gaza prompted international parties to pressure Israel to stop the forced displacement of families in Jerusalem, a practice they fear will undermine the cease-fire efforts. The displacement of Palestinian families also drew criticism from international human rights and legal institutions.

On  May 25 Amnesty International’s deputy director for the Middle East and North Africa, Saleh Higazi, described the forced eviction of families in the Batn al-Hawa area as “yet another illustration of Israel’s criminal policy of forced displacement of Palestinians in motion.”

He continued, “By continuing to pursue this court case — after the outcry over the planned forced evictions in Sheikh Jarrah in occupied East Jerusalem — Israel is fanning the flames of the latest upsurge in violence and perpetuating the same systematic human rights violations against Palestinians that are at the root of the latest violence.”

“For years Israel has sought to expand illegal settlements in the area of Silwan, forcibly displacing more than 200 Palestinians from their homes.” Higazi warned, adding, “Israel’s authorities must immediately halt plans for forced evictions in Batn al-Hawa in Silwan and any other areas of the occupied Palestinian territories.”

Amir Maragheh, a lawyer and activist in the neighborhood, told Al-Monitor, “The Batn al-Hawa case is a political issue and has no legal ground. The allegations by Ateret Cohanim are incorrect and based on forged documents.”

Maragheh said, “The pressure that emerged against the backdrop of the Sheikh Jarrah case created fear among judges, which is why they decided to postpone the examination of the appeals.”

He added that the neighborhood’s residents rejected financial offers from the settler organization. “They are holding on to their land and homes and refuse to leave. They set up a sit-in tent in the neighborhood to organize popular, social and artistic events to support their case,” he said.

Maragheh explained that the Batn al-Hawa file is now in the hands of the Supreme Court, Israel’s highest-ranking judicial body. Its ruling will apply to the other cases, no matter which court is currently handling them.

The residents of Batn al-Hawa fear the Israeli government is intentionally dragging these cases out in order to execute its displacement plan without provoking public outrage. The postponement threatens to weaken popular momentum and support for the neighborhood residents.