The Jerusalem court delayed ruling on whether two Palestinians families must vacate their homes in favor of Israeli settlers in the Silwan neighborhood. 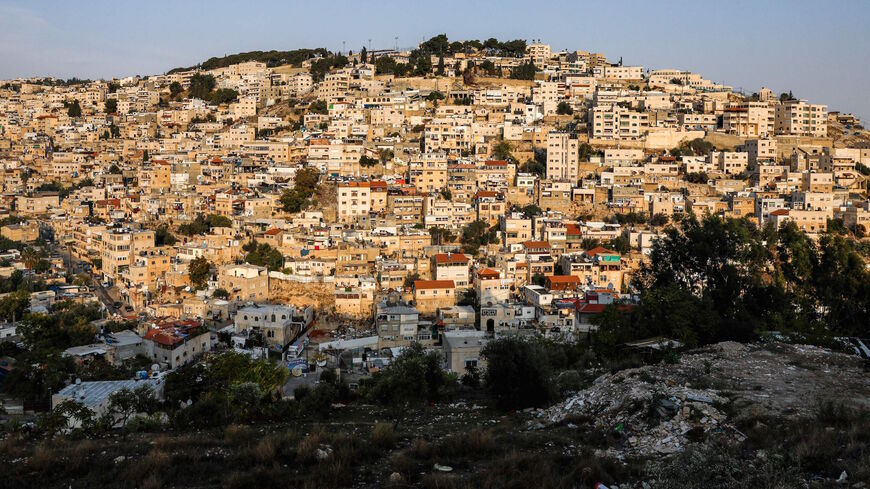 The predominantly Arab neighborhood of Silwan is seen Nov. 9, 2020. Silwan is just outside the Old City in Israeli-annexed east Jerusalem. - AHMAD GHARABLI/AFP via Getty Images

A court in Israel delayed a ruling on Palestinian families facing eviction from the East Jerusalem neighborhood of Silwan.

A similar eviction issue involving the Sheikh Jarrah neighborhood helped set off the most recent round of Israeli-Palestinian conflict.

Dozens protested outside the Jerusalem District Court on Wednesday morning, which was set to hear a petition filed over the planned displacement of two families from Silwan. The judges said they will rule only after the country's Supreme Court rules on similar appeals.

The two families whose cases were due to be heard Wednesday are among a group of seven Palestinian families from Silwan whose evictions a court approved in 2020.

Home to some 33,000 Palestinians, Silwan is located south of Jerusalem’s Old City. Israel captured Silwan, along with the rest of East Jerusalem, in 1967, and then annexed what is considered to be occupied territory by much of the international community.

A 1970 Israeli property law allows land to be reclaimed if Jewish ownership prior to Israel's founding in 1948 can be proven. Settler groups have used the law to launch a wave of lawsuits seeking to evict Palestinians from their homes and transfer their property to Jews.

The United Nations estimates roughly 1,000 Palestinians across East Jerusalem — nearly half of them children — are at risk of eviction. Earlier this month, the UN’s human rights office warned that the forcible transfer of Palestinians is “prohibited under international humanitarian law and may amount to a war crime.”

Ateret Cohanim, a settler organization with the backing of the Israeli government, has tried to evict some 100 families from the Batn al-Hawa area in Silwan, according to Amnesty International. The settler group says that more than a century ago the land belonged to a Jewish trust.

In a statement ahead of the court’s ruling Wednesday, Amnesty called on Israel’s authorities to immediately halt what the rights group denounced as land grabs.

“By continuing to pursue this court case — after the outcry over the planned forced evictions in Sheikh Jarrah in occupied East Jerusalem — Israel is fanning the flames of the latest upsurge in violence,” Amnesty's Deputy Director for the Middle East and North Africa, Saleh Higazi, said.

Like Silwan, a number of Palestinian families are at risk of eviction from East Jerusalem's Sheikh Jarrah neighborhood. Their potential displacement helped sparked the protests that touched off the latest round of fighting between Hamas and Israel.

An Egyptian-mediated cease-fire brought an end to the 11-day conflict last week. More than 250 people died in the Israeli airstrikes and Hamas rocket attacks, the vast majority of them Palestinians.