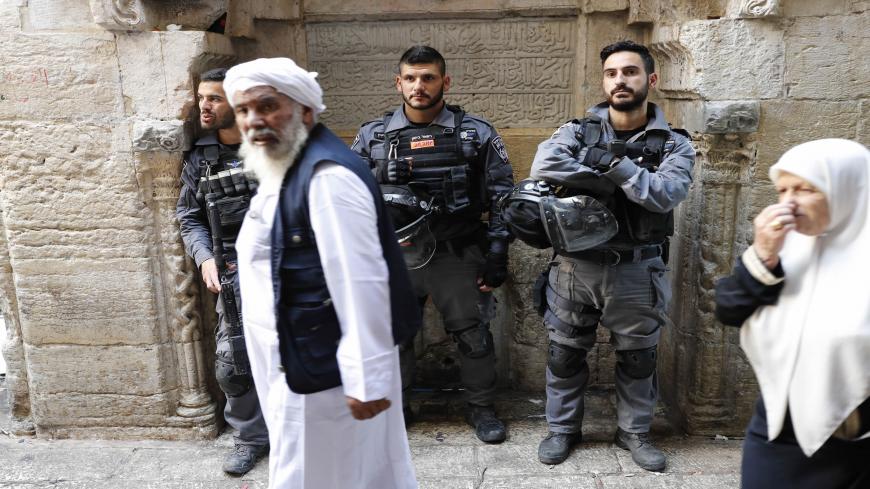 Israeli security forces stand guard in one of the alleys of Jerusalem's Old City following a knife attack early on May 31, 2019. - THOMAS COEX/AFP via Getty Images

Jerusalem, Israel’s capital and largest city, houses approximately 920,000 residents including 350,000 Arabs, who constitute 32% of the city’s population. The civil status of most of the Arabs are “residents,” due to the controversial status of East Jerusalem in the international sphere and the controversy with the Palestinian Authority (PA), which views Jerusalem as its capital — in a future peace agreement.

Jerusalem is viewed as a poor city in general, but the situation of the Arabs in Jerusalem is worse than that of Arabs in the rest of the country. The incidence of poverty of the East Jerusalem Arabs reaches 78%, versus 50% among Israeli Arabs in general, and 25% among Jerusalem’s Jewish population.

According to the Jerusalem Institute for Policy Research, the majority of the men and women in East Jerusalem's workforce earn minimum wage salaries. They are generally hired for nonprofessional work or for part-time work. The average salary of an Arab resident of East Jerusalem is almost 30% lower than the average wage in the Israeli economy.

Two programs recently promoted by Jerusalem Mayor Moshe Leon are designed to address exactly this phenomenon. The two programs are interconnected and include employment in the educational, commercial and industrial spheres.

Leon, who served in the past as head of the prime minister's office during Benjamin Netanyahu’s first term in office, is generally accepted by ultra-Orthodox populations as well as secular ones. Since he was elected in November 2018, he has been talking about the need to strengthen the Arab side of the city, mainly in regard to employment in the technological spheres. One example of this is his interview with the Calcalist newspaper in June 2019, in which Leon said, “For example, there are tens of thousands of youths in the Arab population who can join the high-tech world. We only need to create the appropriate training courses for them. Some of the companies in the city are even willing to create these courses themselves, for their own needs.”

The program that Leon promoted is called “Silicon Wadi” (Arabic for "Silicon Valley"); he announced the beginning of its implementation in mid-June.

According to the plan, in only a few years time, about 200,000 square meters (49 acres) will be developed for employment purposes with an emphasis on quality employment opportunities in the high-tech industry. An additional 50,000 square meters (12 acres) will be set aside for commerce, and another 50,000 square meters for the hotel/hospitality field. The entire project is part of a five-year government plan to develop East Jerusalem and narrow the social and economic gaps in the population. One of the main goals of the plan, which was accepted in 2018, is to narrow the gap between the employment rate of women in East Jerusalem (ages 25-64) to that of Arab women in the same age group in the rest of the country.

In other words, the goal is that by 2023, the employment rate of Arab women in East Jerusalem will reach at least 75% of that of all Arab women in the country. The emphasis on women is important, because the participation of Arab women in the workforce currently only reaches 27% — and that is one of the reasons for the problematic economic situation of most Arab families in which only the man works outside the home.

The Jerusalem municipality set the following goals for the project: creating about 10,000 quality jobs in the city’s eastern section; lowering the distrust between the population of East Jerusalem and the rest of the city, and the municipality and government; raising the employment rate of women in East Jerusalem; and strengthening the Israeli syllabi in East Jerusalem as the key to higher education and employment. The Jerusalem municipality informed Al-Monitor that they have also decided to found a college that will teach various high-tech subjects, in cooperation with high-tech companies in Israel, the PA and companies from the Arab world, mainly from the Persian Gulf states.

Today, the territory designated for the project is an area of small industry, garages and collections of old cars. The municipality created a second plan to compensate those who use the site today. At the end of last month, the Jerusalem Local Planning and Building Committee approved the establishment of a site and defined employment area in the Issawiya neighborhood, situated close to the Hebrew University’s Mount Scopus campus. As part of the program, about 90,000 square meters (22 acres) will be built for commerce, employment, light industry and handicrafts. A significant proportion of the area will be set aside for a Jerusalem industrial car repair center that will transfer from Wadi Joz to the Issawiya neighborhood. In addition to commercial areas, a pedestrian mall and promenade will be built to connect to the National Park on the Mount Scopus slope nearby.

Leon told Al-Monitor that the plans are precedent-setting in scope as well as in financial investment and will improve the economy in Jerusalem in general and the eastern part of the city in particular. He promised to involve the country’s leading companies in order to cause “a real revolution," and also create hope for the residents of the eastern parts of the city.

Beyond the promises, Leon is trying to carry out plans in cooperation with the eastern residents of the city, and acquire their trust despite the thorny political-diplomatic situation. Israel’s security forces view Issawiya as a problematic neighborhood. This past year — before the coronavirus pandemic — there were several conflicts between the police and the residents.

Leon has adopted several trust-building steps. For example, in February, he visited a hospitalized child who was inadvertently hit by a sponge grenade fired by the police. Malik Eissa lost his eye sight. But mainly, Leon passed legislation to freeze the demolition of houses that were built without permits, and advanced legislation for a master plan for neighborhoods that would include the necessary building permits that had gotten stuck in bureaucracy. In addition, Leon demands the Arab leaders to take action to stop the residents of East Jerusalem from hurling stones and firebombs at Israeli vehicles driving to the Ma'ale Adumin settlement.

Mohammed Abed, resident of Issawiya, told Al-Monitor that the plans look good and Leon’s positive approach is laudable, but until he sees real proof “on the ground,” the burden of proof rests on the city council. “We have received promises from 1967 until today — most of which were never carried out. And until this very day, we suffer under the security forces that move around here all the time. If the economy improves like the mayor promises, if they stop destroying our houses and if the police stop running around provoking us, maybe then we’ll start to believe.”

Leaders of the Arab neighborhoods in Jerusalem are in ongoing, direct contact with Leon. Meanwhile, the members of Leon’s own bureau admit that nothing will advance unless "we work together with them."