Egypt and Tanzania close ties are strengthened further by the inauguration of an Egyptian industrial city adjacent to the Tanzanian capital. 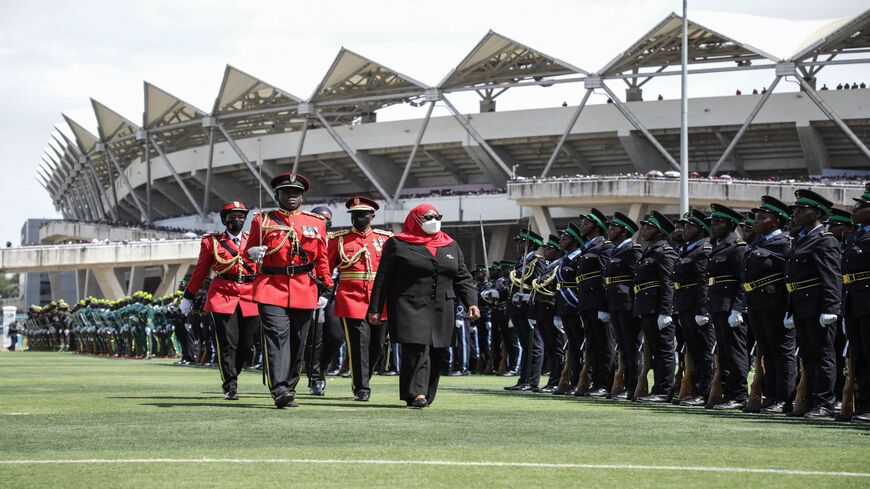 CAIRO — President of Tanzania Samia Suhulu Hassan has laid the foundation stone for the Egyptian Industrial City in the Kigamboni district on the border of the city of Dar es Salaam in Tanzania. The city, as per an Egyptian council of ministers’ official statement, stretches over 2.2 million square meters (544 acres) and is set to contain labor-intensive industries, such as the pharmaceutical, automobile, textile and agricultural industries.

Ahmed Elsewedy, president and CEO at Elsewedy Electric, an Egyptian company, said in statements during the opening of the Industrial Complex in Tanzania that the group is supervising the implementation of this city, the projects of the Elsewedy Industrial Complex and the Julius Nyerere hydropower station, which will be built on the Rufiji River in Tanzania at a cost of $2.9 billion in cooperation with the Egyptian Arab Contractors Company.

Elsewedy revealed the details of the Egyptian Industrial City and stressed that the city targets investments of up to $400 million. He noted that the city seeks to attract at least 100 investors from various countries in the region, and that more than 50,000 job opportunities will be created for young people.

The laying of the foundation stone came after Hassan inaugurated the first phase of the Elsewedy Industrial Complex, which is located on an area of ​​120,000 square meters (30 acres) and contains several factories for cables, wires, electricity meters and transformers.

Code meters are electricity meters that operate by a card system and are charged with a balance in order to restart the electricity.. This type of modern counter is an alternative to the bill counter system.

The complex is also home to a logistics center extending over an area of ​​4,800 square meters (1 acre), and is set to produce the necessary equipment for manufacturing and production in Tanzania. It will also provide more than 50,000 job opportunities for young people and will include a vocational training academy for Tanzanian workers to meet the international labor standards. It will also serve as a regional center for the export of wires, transformers, cables, electricity meters and electrical insulators.

The details of the complex were revealed by Elsewedy during the opening of the complex in the presence of the president of Tanzania and a group of officials from the two countries.

Rashad Abdo, an Egyptian economic expert and president of the Egyptian Forum for Political and Strategic Studies, told Al-Monitor that the laying of the foundation stone by Hassan for an Egyptian industrial city is a serious and important step as far as the economic relations between the two countries are concerned.

He noted that the city will serve as an important step in the field of investment for Egyptian and African businessmen in Tanzania and its neighboring countries.

During the opening activities of the complex, Hassan expressed her deep appreciation to Egyptian President Abdel Fattah al-Sisi and the Egyptian businessmen who attended the inauguration to inject investments into the Tanzanian economy.

“I have already met the attending Egyptian companies during my last visit to Egypt, and they have indeed delivered on their promise to me. I promise them all obstacles facing them will be overcome,” she said.

She also stressed that the opening of the first phase of the industrial complex, which coincides with the laying of the foundation stone for the Egyptian Industrial City, will pave the way for further cooperation and investment between the two sides.

Abdo said, “It is a matter of great economic feasibility for countries to engage in foreign investments. Every country in the world is seeking to increase their exports and investments — both internally and externally — and the inauguration of an Egyptian industrial city in Tanzania will contribute to raising the Egyptian state’s exports and increasing its investment opportunities abroad, which will be of great benefit to Egypt. This will help provide hard currency and will raise the cash reserve balance of the Central Bank of Egypt. This city will offer job opportunities for young people on both sides as well as investment opportunities for Egyptian businessmen.”

He added, “Foreign investments are not only economically feasible, as they also have good political and social dimensions and can enhance Egypt’s position across the African continent."

Yousry el-Sharqawy, president of the Egyptian-African Businessmen Association, told Al-Monitor, “There is no doubt that Egypt’s presence in Tanzania and the willingness of the Tanzanian government to overcome obstacles to the inauguration of an Egyptian industrial city on Tanzanian lands is an encouraging and practical step toward more investment opportunities and further joint cooperation between the two countries. This will benefit both parties.”

Asked about the demands of Egyptian and African businessmen to invest in Tanzania and the African continent in general, Sharqawy said, “We need more incentives in the sector of granting land for the establishment of industrial projects in Tanzania. The movement of money also needs to be facilitated, the Tanzanian customs system developed and facilitated. Tanzanian shipping and transport ports need to be developed and the mechanisms of the Tanzanian economy in general need to be modernized so as to keep pace with the digital transformation system that is now heading to the financial and business market and the global economy. Add to this the promotion of many encouraging investment opportunities, be it for the Egyptian or African investor in general.”

Asked about the details of the dam project, Egyptian Minister of Housing Assem el-Gazzar revealed during his visit to the dam site that Sisi attaches special importance to the Tanzanian dam project. He declared that the project aims to build a dam with a length of 1,025 meters (0.6 miles) at the summit and a height of 131 meters (430 feet) with seven water outlets. The dam’s lake has a storage capacity of 34 billion cubic meters, and it includes a hydroelectric power station with a capacity of 2,115 megawatt. The station is located in the Selous Game Reserve on the side of the Rufiji River in Morogoro region, southwest of Dar es Salaam.

Maj. Gen. Mahmoud Nassar, head of the Central Agency for Reconstruction and head of the Follow-up Committee for the project, revealed that the project employs about 9,000 workers — 8,000 local Tanzanian workers and 1,000 Egyptian and foreign workers — and uses more than 1,400 pieces of equipment.

He stressed that the implementation of the river diversion tunnel — 703 meters (0.4 miles) long, 12 meters (39 feet) wide and 17 meters (56 feet) high — was completed in November last year, and that the two sides held the Egyptian-Tanzania Business Forum in Tanzania to discuss investment opportunities and joint cooperation.