Hamas’ popularity has increased during the recent escalation of violence in Jerusalem, in addition to its role as a political player in the region. 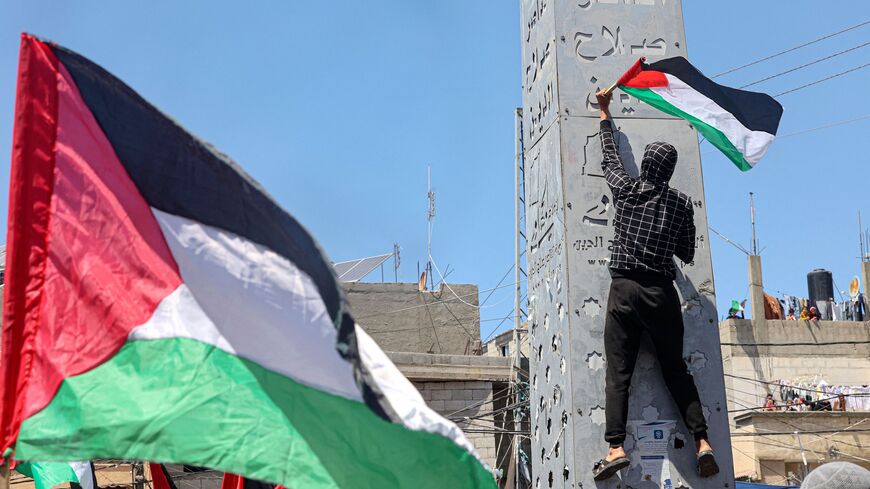 Supporters of the Palestinian Hamas and Islamic Jihad groups rally after Friday prayers in Khan Yunis in the Southern Gaza Strip to express support for the Al-Aqsa Mosque on April 15, 2022. More than 100 people were wounded in fresh violence, which came after three tense weeks of deadly violence in Israel and the occupied West Bank, and as the Jewish festival of Passover and Christian Easter overlap with the Muslim holy month of Ramadan. - SAID KHATIB/AFP via Getty Images

RAMALLAH, West Bank — As soon as Friday’s prayer at Al-Aqsa Mosque, where some 150,000 Palestinians took part, was over on April 22, the crowds marched in the courtyards of the mosque. Hamas’ flag was predominantly present, pointing to the movement’s wide popularity in Jerusalem.

The Palestinian protesters who took part in the mass rally near Al-Aqsa Mosque in Jerusalem chanted slogans in favor of the Palestinian armed factions and their leaders, namely Mohammed al-Deif, commander of Izz ad-Din al-Qassam Brigades, Hamas' military wing.

As tension has been building up during the Muslim holy month of Ramadan in Jerusalem, the popularity of Hamas and other armed factions, including the Islamic Jihad, seems to have increased in the city, amid their statements stressing that Al-Aqsa Mosque was a “red line” that Israel should not cross and their threats of a new military confrontation similar to that of May 2021 between Israel and Palestinian factions in the Gaza Strip.

Hamas seems to have succeeded in imposing a new equation in Jerusalem after acting on its threats of firing rockets from Gaza toward Israel in the event the so-called flag march that Israeli settlers held on April 20 was allowed to reach the Damascus Gate (Bab al-Amud area) in Jerusalem.

The Israeli police prevented the settlers from entering the Old City of Jerusalem through the Damascus Gate that leads to Al-Aqsa Mosque, known to Jews as the Temple Mount, leading to rare clashes between the two sides.

Israeli journalist Gal Berger tweeted, “A year after the Sword of Jerusalem Battle (in reference to the May 2021 conflict), Hamas will achieve a victory named the ‘flag march ban in Jerusalem.’”

Also on April 20, the Israeli political and security leaderships issued a decision to close the courtyards of Al-Aqsa Mosque to settlers from April 22 until the end of Ramadan (early May), following consultations between Prime Minister Naftali Bennett and officials to discuss the heightened tensions in Jerusalem.

In May 2021, Hamas launched a salvo of rockets toward Israel in response to the Israeli settlers' incursions at Al-Aqsa Mosque back then and the planned eviction of Palestinian families from the Sheikh Jarrah neighborhood of Jerusalem. The so-called Sword of Jerusalem battle was a turning point and showed that Al-Aqsa Mosque and Jerusalem have become a red line that must not be crossed.

Husam Badran, a member of Hamas' political bureau, told Al-Monitor, “The Sword of Jerusalem Battle was a crucial period in the Palestinian-Israeli conflict. Hamas and the resistance were able to turn Jerusalem into a real red line on the ground, not only in slogans. Therefore, the resistance is ready to pay all prices for the sake of Jerusalem.”

Badran added, “The message that the Sword of Jerusalem battle has instilled continues to be present among the decision-makers in Israel and among the Palestinian public. It is the message that the resistance is capable of confusing Israel at the security and political levels.”

He stressed that “Hamas’ popularity is gradually advancing, and there is a popular trust in the movement and its approach because it espouses the resistance as a project, a culture and an action on the ground, and because its capabilities have been proven effective in past confrontations.”

The recent escalation in the West Bank and Jerusalem and anticipation of a military confrontation with Israel, especially after rockets were fired from the Gaza Strip toward the settlements in the Gaza envelope in recent days, have pushed the international community to focus its attention on the Palestinian cause in an attempt to prevent a wider confrontation.

The Hamas and Islamic Jihad leaderships made and received dozens of calls from Arab, international and regional parties in the past days in a bid to de-escalate the situation, in tandem with the continuous mediation efforts of the Egyptian intelligence service and the United Nations.

In this context, Badran said, “Hamas, specifically its leader, held dozens of direct and indirect contacts and meetings with various parties in the past few days. Meanwhile, several parties sent indirect and direct messages [to Hamas] calling for the need to maintain calm and de-escalate the situation in the West Bank in order to avoid a new war with Israel.”

He continued, “The recent international attention stems from a desire to maintain calm and avoid the deterioration of the situation in Jerusalem and the West Bank that could lead to a wider conflict in the whole region.”

He noted that some of these contacts with Hamas were prompted by Israel, saying that the message behind them was that Israel does not intend to change the status quo in Al-Aqsa Mosque and in Jerusalem.

Badran said, “Generally, international parties do not take action unless they see that the occupation (Israel) is in crisis. And in this vein, these parties communicate with us indirectly. But this does not mean that there is no Arab and regional support for the rights of Palestinians.”

For its part, the Palestinian Authority (PA) reached out to international parties to pressure Israel, as it seeks to preserve its position on the political scene. On April 18, PA President Mahmoud Abbas spoke with Russian President Vladimir Putin and Jordanian King Abdullah II in separate phone calls, followed the next day by a similar phone call with US Secretary of State Antony Blinken to discuss the situation in Jerusalem.

Abbas also received a delegation from the US administration at the presidential headquarters in Ramallah on April 21. During the meeting, he called on the US officials to immediately intervene to end Israeli actions in all Palestinian territories, especially in Jerusalem, Al-Aqsa Mosque and the Church of the Holy Sepulcher.

The Palestinian leadership was scheduled to meet on the evening of April 17 to discuss the Israeli escalation in the West Bank and Jerusalem and make a decision in this regard. The meeting was canceled at the last minute without any declared reasons.

Commenting on the reason behind postponing the meeting, Al-Araby al-Jadeed website quoted unnamed Fatah sources as saying, “President Abbas expressed his dissatisfaction at the fact that Arab mediators were communicating directly with Hamas and the Islamic Jihad to calm the situation on the ground. [Abbas] believes that through these moves, [Arabs] no longer see him as the official side to whom they resort to discuss events in Al-Aqsa Mosque and in the West Bank.”