The Israeli air force bombed Gaza in response to rocket fire, the worst violence in a year, as confrontations continue in Jerusalem. 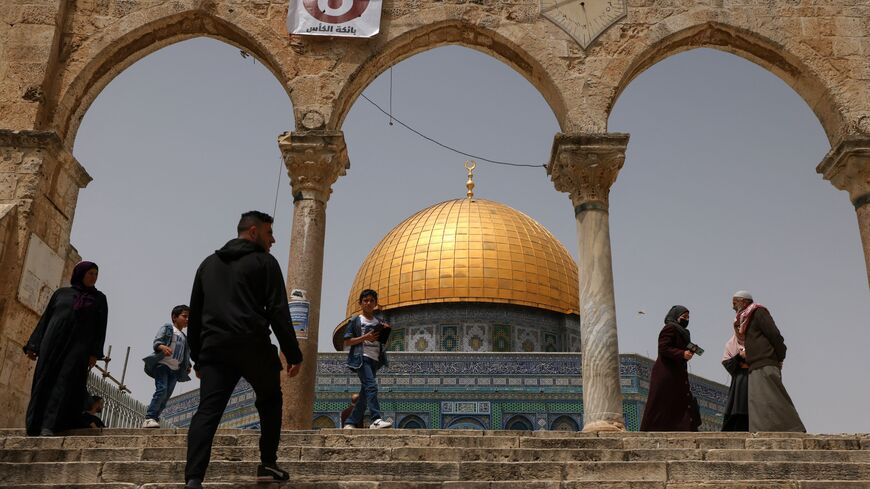 Palestinian Muslims gather in front of the Dome of Rock mosque at the Al-Aqsa mosque compound in Jerusalem's Old City on April 17, 2022. - AHMAD GHARABLI/AFP via Getty Images

GAZA CITY, Gaza Strip — Palestinian factions, led by the Hamas Movement in Gaza, considered the Israeli police's decision to block far-right Jewish protesters from holding a flag march on April 20 as a victory.

"Just as we defeated the so-called flag march, we will defeat the policy of intrusion. We are still at the beginning of the battle," said Ismail Haniyeh, head of Hamas' political bureau, in a statement Thursday.

The intensity of the Jewish incursions into Al-Aqsa Mosque compound to mark Passover was limited, while the number of Palestinians who come to the site to pray during Ramadan increases.

On April 15, the Palestinian factions called for preparation in the Gaza Strip for a possible confrontation with Israel, in response to attacks on Palestinians in Jerusalem. The joint operations room for the military factions in the Gaza Strip has been on high alert, following a meeting held in the office of Yahya Sinwar, Hamas’ leader in Gaza, on April 14.

The factions threatened a new war that would be heavier than the May 2021 war if the settlers held the Flag March, led by MK Itamar Ben Gvir, leader of the far-right Otzma Yehudit.

The Gazan threats resulted in the Israeli police preventing the Flag March from reaching Bab al-Amud in the Old City of Jerusalem on April 20. The Israeli army announced general closure on the West Bank and Gaza Strip in the following two days. Settler groups called for intensifying incursions during the Jewish Passover holiday.

Commenting on the failed Flag March in Jerusalem, Hamas spokesman Hazem Qassem tweeted, “The solid will of our Palestinian masses … is able to make achievements against the occupation and the settlers’ abuses.”

However, Israel's Iron Dome anti-missile system intercepted a rocket launched from the Gaza Strip towards Israel on the evening of April 20, which no faction claimed responsibility for. The Israeli army struck back at Hamas military sites in different parts of the Gaza Strip.

Hamas posted a video showing off the Soviet Strela-2 shoulder-fired system used for the first time to counter Israeli aircraft. Hamas used the weapon to defend the Gaza Strip against Israeli airstrikes on Thursday at dawn.

Hamas' political bureau chief Haniyeh called on Russia to play a central role in curbing the attacks in Al-Aqsa Mosque. This came in a phone call he made on Thursday with Russian Foreign Minister Sergey Lavrov.

Yusef al-Hasayneh, a member of the political bureau of the Palestinian Islamic Jihad (PIJ) , said on Thursday that “any incursions and attacks on Al-Aqsa Mosque if repeated, will ignite the confrontation with the enemy.”

Daoud Shehab, a spokesman for the Islamic Jihad in Gaza, told Al-Monitor, “Israel is trying to impose religious control over Al-Aqsa, which would fuel the conflict and turn it from a political one into a religious one.”

He added, “The factions do not seek any escalation, but Israel leaves us no option but to enter a confrontation and a battle.”

He noted, “The factors that would lead to an implosion of the situation are still present. The last 10 days of the month of Ramadan are ahead of us and are critical and highly sensitive, especially with the influx of worshipers to Al-Aqsa.”

Shehab said that Islamic Jihad is closely following what is happening in Jerusalem and that if the animal sacrifices some Jewish groups had threatened to carry out at Al Aqsa had happened, "a confrontation would have [already] erupted."

"If the flag march had reached the Damascus Gate [Bab al-Amud], the main entrance to the Muslim quarter, then this also would have led to a confrontation," he added.

Political analyst Mustafa Ibrahim told Al-Monitor, “There have been warnings since March that the month of Ramadan will involve an escalation on several fronts, including Jerusalem and the West Bank. In fact, they increased when the Palestinians faced extremist Jews carrying out [animal] sacrifices in the courtyard of Al-Aqsa Mosque. Gaza’s response has not reached the level of a military confrontation because the parties are not interested in returning to what happened last year, but nothing is certain.”

Speaking to Al-Monitor, Mustafa al-Sawaf, a political analyst and former editor-in-chief of the local Felesteen newspaper, did not rule out the possibility of a new confrontation with Israel.

He said, “Things are escalating, and everyone is in a state of anticipation. The factions’ meetings are ongoing and have not been stopped. … There are contacts at all military and political levels, and the contact man at the outer door is waiting to be given zero hour.”

He added that “all eyes are focused on this scenario to happen in support for Jerusalem, its people and mosque, and I think that it is just around the corner. Let’s get ready and see.”